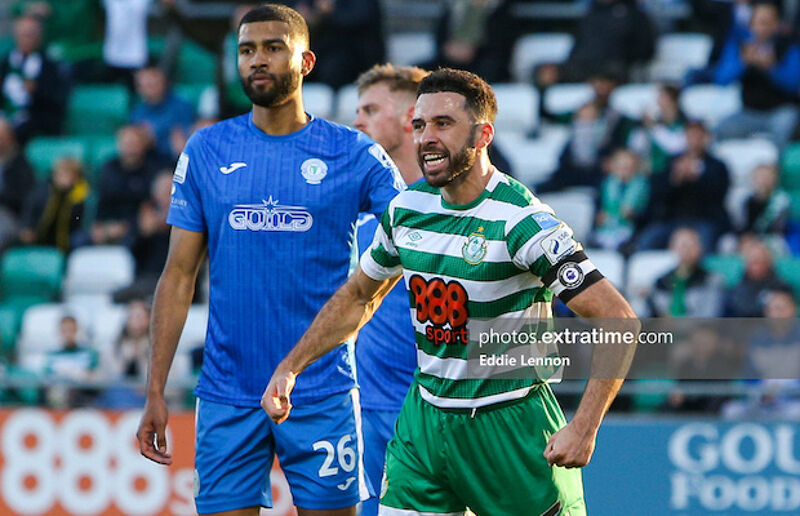 Pico Lopes scored his first goal of the season for the Hoops Credit: Eddie Lennon (ETPhotos)

Whatever the scoreline on Friday evening, Shamrock Rovers supporters turning up at Tallaght Stadium ahead of the game against Finn Harps felt they had got a great result already.

They had heard the news from earlier in the day that their Head Coach Stephen Bradley was not leaving for Lincoln City but would remain at Rovers and his side put in a dominant display against Finn Harps to win 3-1.

All the goals came in the first half from Pico Lopes and a brace by Danny Mandroiu before Conor Tourish pulled one back.

"I love this club and we have unfinished business and it feels right to stay," said Bradley speaking to RTÉ ahead of the game.

Hoops fans mood was heightened by a dominant first half display which saw them score three times across an 11 minute period. The goalscoring began in the 17th minute as the Hoops grabbed two quick fire goals in a three minute spell.

Pico Lopes scored his first of the season as he drilled home a shot after Mark McGinley punched out a Jack Byrne corner under pressure from Rory Gaffney.

Danny Mandriou then scored with a diving chested finish before he added a diving header on 31 minutes – both inside the six yard box. The first came when he dived forward to finish Sean Gannon’s drilled cross and the second – his fifth of the season - came from Jack Byrne’s delightful cross from the right.

As part of a referee exchange programme, Welsh official Tom Owen was in charge of the game and he was quick to flourish a couple of first half yellow cards at Harps players Regan Donelon and Conor Tourish.

Having given themselves a three goal margin inside a half an hour, they couldn’t add to their tally and then had their lead reduced as Harps grabbed a goal back four minutes from the break.

It hadn’t been their only chance of the opening period – Alan Mannus had to stand up to stop a Yoyo Mahdy shot from an acute angle earlier in the half – but some late set piece pressure told.

Jesse Devers swung in a couple of corners and it was from the second one that Conor Tourish headed home to make it 3-1 at the half time whistle.

With one eye on Monday’s home match against Sligo Rovers, Bradley brought on three players at the break with Sean Hoare, Graham Burke and Aidomo Emakhu coming on.

It was pretty much one way traffic in the second half.

McGinley pulled off a trio of cracking saves around the hour mark; the first saw him react quickly to a Richie Towell piledriver from outside the box, then he stuck a hand up to paw out Emakhu’s dinked effort after a slaloming run by the substitute.

With Bradley making his final subs on 60 minutes, Aaron Greene raced onto a Burke through ball and when he cut inside McGinley again was up to the task to save Harps.

Ollie Horgan’s men required Tourish to clear Towell’s effort off the line before McGinley diving full length saved Emakhu’s follow up as they somehow kept the Hoops at bay.

The biggest surprise of the night was that Rovers couldn’t add to their tally in the second half but the Hoops supporters certainly went home happy. With their 3-1 victory in Tallaght and Derry drawing at home to Bohemians, Rovers moved to just a point off the Candystripes who remain top of the table.