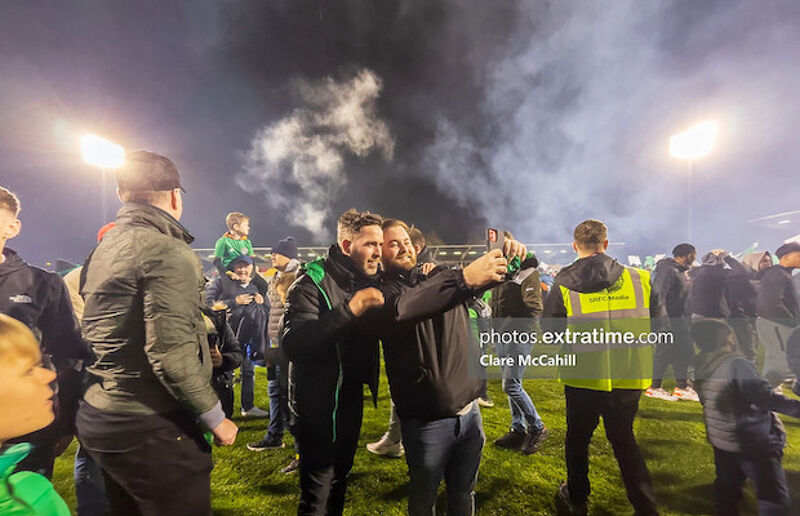 Stephen Bradley gets a selfie with a Rovers fan after his team's 3-0 win over Harps last October that secured their 19th league title Credit: Clare McCahill (ETPhotos)

Friday’s game against Finn Harps (kick off 8pm) could be the final time Stephen Bradley take charge of the Hoops as he mulls over a possible move to Lincoln City.

His side sit second in the table three points off Derry City after they dropped two points last week in Sligo. Andy Lyons headed home a Jack Byrne corner – for his fifth goal of the season - mid-way through the first half but Sligo found a second half equaliser to see the game finish 1-1 in the Showgrounds.

Rovers dispensed with their usual press event that they host the day before home games, thus avoiding any questions being asked about the managerial position. Bradley is speaking with Lincoln City about taking up the managerial role with the League One club.

Speculation is mounting that he may bring Rovers’ Sporting Director Stephen McPhail and assistant coach Glenn Cronin with him should he go, with former Rovers player Stephen Rice being mentioned as the club’s target if Bradley leaves.

The Hoops did release some quotes from Bradley ahead of the Harps game and their Head Coach wasn’t happy with how his team went about the game in the second half. “We needed to manage the game better,” said Bradley. “We let it get too stretched and too open. Our game management has been very good this year, but last Friday wasn’t up to our level and that was frustrating.”

The pitch is Sligo was not conducive to good football being played and Bradley felt that was an issue. “We had half chances and found ourselves in very good positions, sometimes the final pass was delayed, or we took an extra touch. I felt the pitch was a factor in that, the players couldn’t be certain of their touch on it.

“It is no excuse, every team in the league has played on it now, but we could see that players were uncertain on it. In some areas it could be seen as borderline unsafe.”

The Hoops won 3-0 in Finn Park earlier in the season thanks to two goals from Andy Lyons, along with a Graham Burke penalty. “Andy has been brilliant since he came in,” said Bradley about the close season signing from Bohs. “We felt that he would add something to us, especially with the attacking side of his game, and he’s got off to a great start. He‘s been great for us and really suits the way we play.”

Harps sit in second last place in the table on ten points – six clear of bottom side UCD.

“Finn Harps will feel that their points total should be higher. They’ve been competitive in all of their games, maybe dropping points that they feel that they shouldn’t have. They tested us in the match up there, hitting the bar, and we’ll respect them and the way they play.”

The four League of Ireland sides playing in Europe later in the summer have had fixtures moved up so the Hoops will play again on Monday night – with another game against Sligo Rovers.

“We are really looking forward to being back in Tallaght in front of what will hopefully be another great attendance. The fans have been brilliant this year, and we’re anticipating great support for these three very important home games.”

Harps’ win over Shelbourne last week means they will travel to Tallaght with some confidence, not that Ollie Horgan was talking up his team’s chances. They are just two points behind Shels now and three off Drogheda United.

Horgan’s side did take four points off the Hoops last season – winning in Finn Park and drawing 1-1 in Tallaght last June when Adam Foley’s second half goal cancelled out an eighth minute Aaron Greene strike.

“There’s no point pretending anyone fancies us to get a result in Tallaght,” said Horgan speaking to his club’s media team.

“You don’t win two league titles in a row by accident. They’re a tremendous side and we’ve been on the end of a few heavy defeats at the hands of Rovers during my time.

Harps will be fully focused on Friday’s game as they have no Monday night fixture – whereas the Hoops have another home game.

“Rovers will be eager to make up ground on Derry and will see our game as the perfect opportunity to get back to winning ways after their draw in the Showgrounds last weekend.

“We have to be at our best and keep things tight for us to have a chance. We’re down a few bodies through injury as it is, we’ll take a cut off it as we always do and see where it gets us. ”

This match is set to be Stephen Bradley’s 190th league game in charge of the Hoops. In that time he has won 112 matches which is a win percentage of 59.3% - this compares with Michael O’Neill’s win percentage in the league of 58.3%.

This will be the 18th time in all competitions that Stephen Bradley has managed Shamrock Rovers against Finn Harps. He was won 15 times, with one draw and just one defeat. That loss came last season when Harps beat the Hoops 2-1 in early September. Tunde Owolabi – now with St. Pat’s - scored the winner five minutes from time.

Only Will Patching (6) and Jamie McGonigle (9) have scored more league goals this season than Andy Lyons’ five.