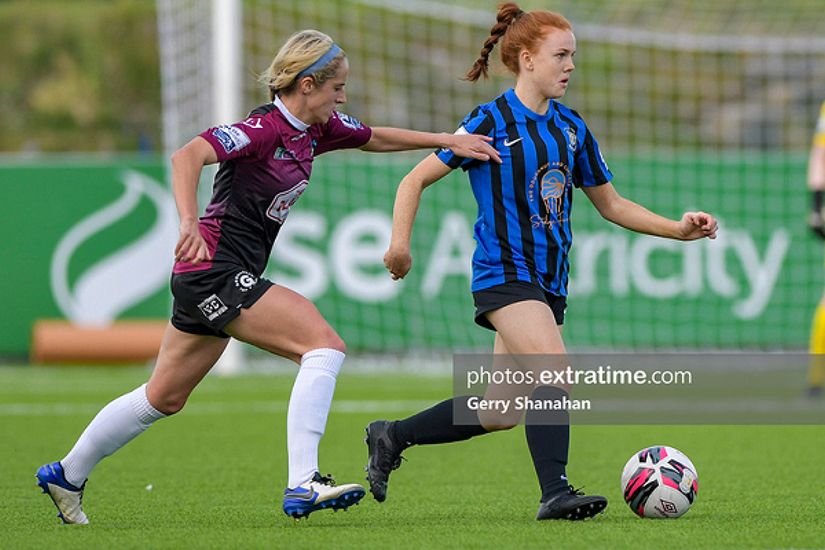 Galway held Wexford Youths to a 2-2 draw in the Women’s National League at Eamonn Deacy Park on Saturday evening.

The home side took the lead early on courtesy of Becky Walsh, but the visitors fired back twice in the first half for the win with Becky Watkins and Kylie Murphy scoring to give Wexford a lead which they held late into the game.

Julie Ann Russell intervened just minutes from time to put the ball in the net to give the side a share of the points with her second goal of the season.

The home side that took the lead in this contest after a brief period of pressure by the home side from a couple of corners.

The visitors failed to deal with Shauna Brennan’s corner kick in the third minute with Chloe Singleton recycling the ball and playing it back out to her teammate on the wing. The young defender sent a dangerous cross into the box with goalkeeper Maeve Williams failing to hold onto it and allowing Becky Walsh to bundle the ball over the line.

Wexford were behind for just 15 minutes with Youths taking control of the game after conceding the goal. Ellen Molloy picked up the ball in the Tribeswomen’s half after a wayward clearance, she played a quick ball to Becky Watkins, and she struck a beautiful effort from the edge of the box into the bottom corner to bring her side back level.

Kate Thompson was judged to have committed a foul in the box just three minutes later and Kylie Murphy stepped up to take the spot kick, the experienced striker placing the ball into the bottom right corner for her fourth goal of the season and the lead.

Youths had a chance to increase their lead in the 40th minute when Galway shot stopper Abbiegayle Ronayne punched the ball clear from a corner-kick. The ball eventually fell to Della Doherty just inside the box, but her shot was straight at Ronayne who gratefully smothered the ball.

The Tribeswomen were almost back on level terms just before halftime after a well worked move started by Chloe Singleton in the entre of the park. She played the ball to the overlapping Brennan on the left wing who then switched it to Emma Starr on the opposite flank – her cross found Jenna Slattery, but she couldn’t get enough of the ball and her header floated over the bar.

Youths went close again close to the hour mark after some great trickery by Ellen Molloy in the Galway box, the midfielder flicked a cross to the onrushing Teegan Lynch who nodded the ball at goal, but Ronayne was well positioned to keep the ball out of the net.

Second half substitute Aoife Thompson was inches from an equaliser with just ten minutes to go when Brennan sent another dangerous cross into a crowded Wexford box. The forward threw herself at the ball, but her header ran just wide of the post.

Galway secured the equaliser in the 87th minute when a Shauna Brennan free-kick wasn’t dealt with fully in the box. The ball found its way to Russell in the middle of the area who rifled off a shot, the ball took a major deflection which took it out of the reach of Maeve Williams and sent the ball into the net.

Wexford had a huge let off deep into injury time when Brennan stood over another free-kick. This time the ball found second half substitute Taylor Rutland who took the shot on the volley. The ball went back across the goal and looked destined for the net only to deflect off the post and away from danger.