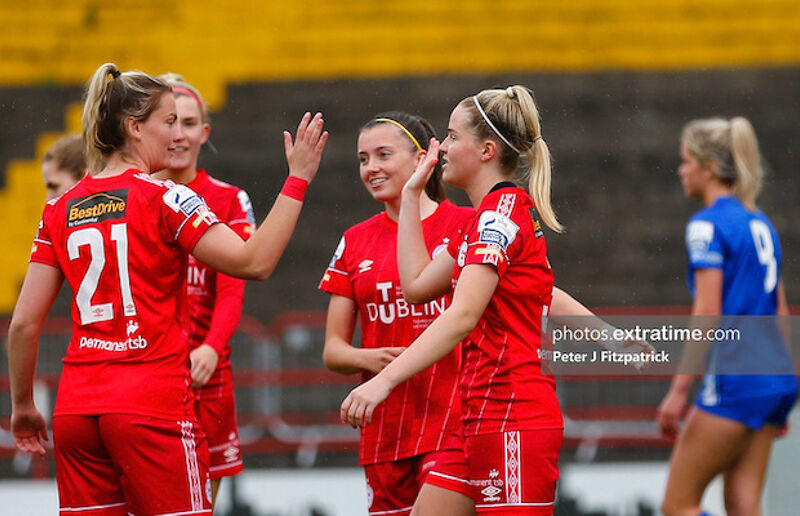 Shelbourne moved two points clear at the top of the WNL table with a 5-0 win over Treaty United at Tolka Park on Saturday afternoon.

With Peamount United dropping two points earlier in the day as they drew with Bohemians, it was certainly a good afternoon for the Reds.

The home team went two goals up inside five minutes. Gloria Douglas got her first of the afternoon before Jessie Stapleton doubled her team’s lead with a free header inside the six yard box after Treaty ‘keeper Trish Fennelly pushed a Shels freekick onto the crossbar.

United had to deal with a couple of enforced changes due to injury in the first half which didn’t help their cause as Shels dominated the proceedings.

Saoirse Noonan added two more goals for Shels before the break. The first saw her tap home an Abbie Larkin cross after the teenager, who turned 17 during the week, made a great run down the right before squaring from the end line.

Chloe Mustaki provided the assist for Noonan’s second with a cross from the left that was dispatched by a diving header by the Cork player.

Noel King withdrew his trio of Irish internationals at the break with Mustaki, Larkin and Noonan all coming off and that probably helped Treaty in the second period.

The Reds got just the one additional goal in the remaining 45 minutes with Douglas getting her second goal just after the hour mark with a header from a disputed corner.