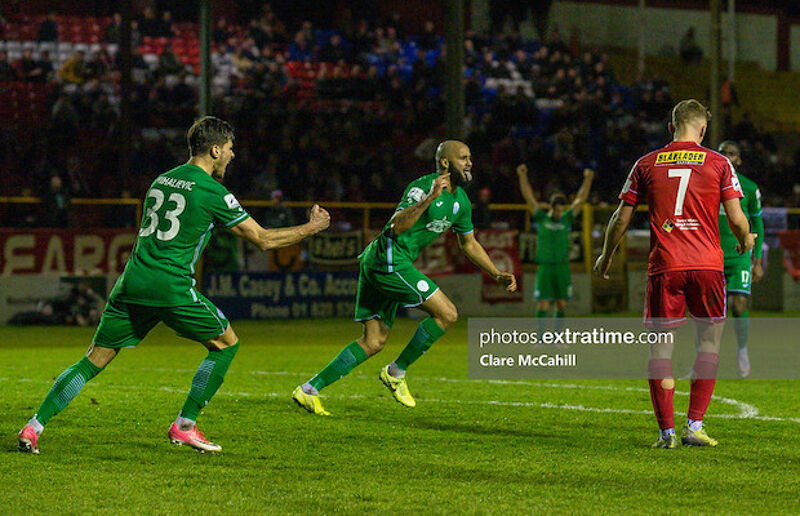 Two teams who are currently in relegation territory in the Premier Division meet on Friday night when Finn Harps host Shelbourne in Ballybofey.

Harps have only one win to their credit after a dozen matches played. However, as they picked up those three points in an away win against Shelbourne in Tolka Park, they will feel reasonably confident that they can start to climb out of the relegation zone with another three points against the same opposition at Finn Park.

Ollie Horgan’s much changed squad for the 2022 season have found it tough going this campaign and they were dealt a further blow this week with the news that club captain David Webster will be out for the remainder of the season with a knee ligament injury suffered against Bohemians in mid-April.

The Donegal side suffered the most recent of their seven losses this season when they went down to St. Patrick’s Athletic 2-0 last weekend.

Two goals by Eoin Doyle either side of half time was enough to give Tim Clancy’s side all three points.

Ollie Horgan referenced their solitary win over Shelbourne when he spoke to the Finn Harps. media team during the week.

He said: “Shels have probably kicked on a bit since we last played them and have a couple of very impressive wins over Sligo and Derry, two teams we’ve lost to in recent weeks. We are down a whole host of bodies but we can’t dwell on that.

“We were much improved in the second half last Friday, so if we can play to that level again and perhaps be a bit more clinical in front of goal, we’ll give ourselves a chance of a positive result come full-time.”

Please note that any fans travelling by rail to Harps v Shels tomorrow night should bring food and refreshments as required.

And their own train. https://t.co/STPUgR6XON

The Reds were involved in a very fiery encounter against Dundalk in their last match when they had both Shane Griffin and manager Damian Duff red carded, along with Dundalk’s Steven Bradley, in a match that they eventually lost 2-1.

That defeat was their second on the trot and leaves them in eighth place in the table on 12 points, five ahead of Friday’s opposition Finn Harps who are on seven.

They have only scored 10 goals in 12 matches and will be need to improve on that record if they are to take anything away from the Harps match and indeed from the season as a whole.

Shelbourne boss Damien Duff has said he is looking for a performance “full of energy” ahead of Friday night’s clash with Harps.

Duff says his side was “devoid of energy” the last time the teams met at Tolka Park and knows a much-improved performance will be required for “one of the toughest places to go in the league.”

“The likes of Shamrock Rovers and Derry often struggle there so listen we know what we’re facing on Friday.

“It’s a massive game but at the end of the day it’s the same number of points on offer as any other game,” Duff added.

Shelbourne will be without the suspended Aaron O’Driscoll, Shane Griffin and Sean Boyd while Coach Alan Quinn is also suspended – picking up a four game ban.

Duff told shelbournefc.ie that his side is “fully prepared” for a game they know will be fiercely contested.

“It’s probably one of the better times of year to go there with the weather but it’s a game where the players are going to have to show their personality,” he said.

“For 89 minutes last week we showed great concentration and yes there were positives but we switched off for 60 seconds and you can see what happens,” he added.

Duff said his side will have to defend well with their concentration needed to defend crosses into the box and set pieces throughout the game.

Shels have no new injury concerns going into tomorrow’s game with David Toure and Sean McSweeney set to miss out with injury.

Ethan Boyle, Conor Tourish and Eric McWoods were the goal scorers when Harps defeated Shels in the first round of fixtures at Tolka Park on March 18th. Ironically, all three players miss out on this match either through injury or suspension.