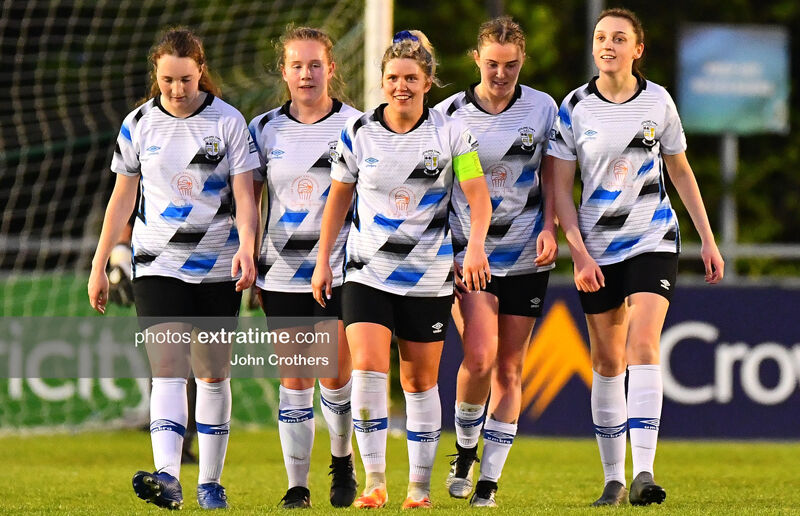 Athlone players celebrate the only goal of the game against DLR Waves. Credit: John Crothers (ETPhotos)

Athlone Town made it two wins in four days to move up to sixth in the table as they overcame DLR Waves at the UCD Bowl on Tuesday night.

A mix-up between Waves keeper Eve Badana and defender Niamh Prior saw the latter turn the ball into her own net just before the hour and it proved the difference.

Waves came into the game on a high after shocking champions on Shelbourne on Saturday afternoon but they couldn’t replicate the performance against the midlanders.

Tommy Hewitt’s side were deserved winners as they created the better chances and could easily have won by a larger margin against a lacklustre Waves side.

The game had been rescheduled after the original tie between the sides, due to take place last month, had been postponed due to a malfunctioning sprinkler.

And both teams came into the tie in good form, Athlone having earned their second win of the season on Saturday away to Treaty United.

The visitors could have been expected to show the greater signs of fatigue with two away trips in four days but they started the game much the brighter.

Three corners in quick succession typified Athlone’s energy in the early minutes as they pinned Waves back into their own half.

They could have taken the lead inside seven minutes as an errant backpass sent Gillian Keenan through in on goal, but Ireland stopper Badana bailed her side out.

Sarah McKevitt dug out a dangerous cross that almost found Orlagh Fitzpatrick, making her first Waves, but neither she nor Malone could turn it home.

Athlone took the lead in fortuitous circumstances just before the hour as Munroe’s free kick bounced in the box and Prior nodded the ball into the net.

The visitors should have doubled their lead as a long ball over the top sent sub Emily Corbet through but Badana did enough to force her to turn her shot behind.

Waves pushed on as full time approached but they didn’t produce enough of note, Clare’s speculative effort the best they could muster as Athlone eased to victory.