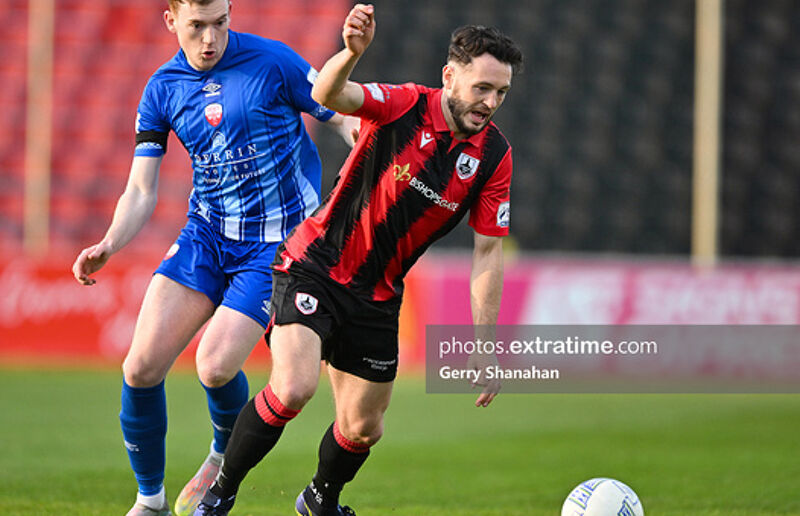 There was nothing to separate Longford Town and Treaty United at Bishopsgate on Saturday night Credit: Gerry Shanahan (ETPhotos)

It was a goalless stalemate at Bishopsgate as Longford Town extended their unbeaten run to seven games while Treaty remain six without a loss.

In team news, Gary Cronin made a single switch following last week’s last gasp victory over his former side Bray Wanderers with the injured Ryan Graydon dropping out, Dean Zambra his replacement.

For Tommy Barrett’s visitors- another side to win narrowly last weekend courtesy of a late strike to beat Wexford- Sean Geurins and Matt Keane returned to the starting eleven while Joe Gorman, Conor Melody and Adam Gallagher took places on the subs’ bench with Stephen Christopher, Joel Coustrain and goalkeeper Conor Winn missing out on the match night squad altogether.

The early pressure came from the Midlanders as they looked to make home advantage count in the opening stages and Jack Brady had to be sharp on a couple of occasions to keep his goal intact. De Town did get the ball beyond the keeper as the half hour approach but Sam Verdon’s effort was ruled offside.

It was only a temporary respite for the Treaty defence as Brady had to be alert to claw away a Shane Elworthy volley only moments later- the defender looking for his second of the season, having netted against Waterford earlier in the campaign.

Enda Curran, with five goals already for Treaty in 2022, had a couple of chances for the LImerick outfit with a header narrowly off target before American goalkeeper Luke Dennison denied him after the striker had found space in the Longford box.

With both goalkeepers showcasing their talents in the first half, it ended scoreless at the break. The opening period of the second half saw Treaty take a foothold on proceedings with a number of half chances before Brady came to his side’s rescue once more with a sharp double save- the second to deny Sam Verdon- and then knocking a Dean McMenamy header over his own crossbar.

The closing stages were punctuated with a few half chances for both sides and a flurry of substitutions- the most high profile for Treaty United being the return of Conor Melody for the first time since March 4th.

With two netminders on form- Jack Brady with two clean sheets in his last four games, Dennison with two in his last three games-  and a pair of teams both unbeaten since March 14th, a goalless draw was almost a natural conclusion, despite the number of chances created.

For Treaty, they end the night in fifth position in the table and welcome second place Galway United to the Markets Field next weekend. Longford Town are still playing catchup in terms of games played and are third in the division with a trip to league leaders Cork City on the cards for next Friday night.