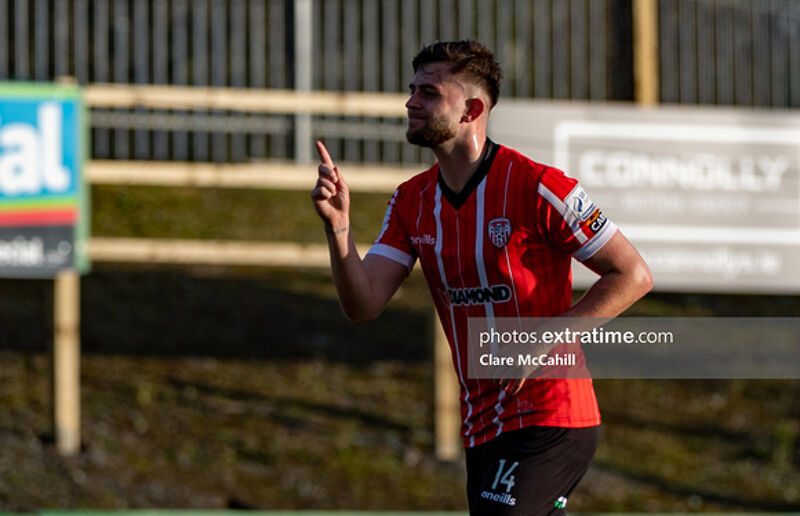 Will Patching was on the scoresheet as Derry City had a comprehensive victory over UCD Credit: Clare McCahill (ETPhotos)

Derry City recorded a dominant 7-1 win over UCD at the Ryan McBride Brandywell Stadium on Friday night to cement their place at the top of the Premier Division.

The Candystripes played at home for the first time since last Friday’s defeat against Shelbourne- their maiden defeat of the season. Since that game, they also recorded a 1-1 draw away at Drogheda United which saw the gap back to Shamrock Rovers in second place cut to a single point, wiping out the six point advantage the Candystripes held before last weekend’s Good Friday fixtures.

For their part, visitors UCD had been undone by a late own goal to fall to a narrow defeat against St Pat’s on Monday. This having conceded a penalty and a late second goal on their own trip to Drogheda on Good Friday.

The Students made 5 changes from the loss to the Athletic with Mark Dignam, Liam Kerrigan, Dylan Duffy and Donal Higgins returning to the starting eleven. Lorcan Healy resumed between the posts, having missed out to debutant Kian Moore on Monday. Ruaidhri Higgins bringing Patrick McEleney, Jamie McGonigle and Brandon Kavanagh into his starting selection while Brian Maher recovered from the illness which had kept him out of the Easter round of games.

Derry opened the scoring after just 13 minutes with in form playmaker Will Patching collecting a sumptuous ball from Patrick McEleney to fire past the recalled Healy for his sixth goal of the season and bringing him above Sligo’s Aidan Keena at the top of the league scoring charts. However, the returning McGonigle was quickly in on a slice of the scoring action and a quick fire double just past the twenty minute mark- the first a long ball from Cameron Dummigan, the second courtesy of an assist from keeper Maher- saw the Candystripes 3-0 to the good.

Worse was to come for the visitors before half time as both Cameron McJannet- a header from a dinked Matty Smith delivery- and his namesake Dummigan with an effort from distance found the net to leave Derry City five goals ahead at the interval. Dummigan himself was replaced by Joe Thompson during the break while Andy Meyler made 4 changes for the visitors.

Unlike on Monday night, Thompson didn’t get on the scoresheet in the second half, however Ronan Boyce did- his third of the season- as well as a hat trick for McGonigle which saw the former Coleraine striker move one clear in the league goalscoring charts on seven, matching the number of goals the Candystripes scored on the night.

Higgins used the second half to give game time to a number of Academy prospects with Evan McLaughlin, Daithi McCallion and Gerard Storey all seeing action and, despite Alex Nolan netting a consolation from UCD, the Candystripes remain top of the pile after 12 games- one point clear of a resurgent Shamrock Rovers who beat Bohemians 3-1 in their Dublin derby to record their fifth victory in a row on Friday night.