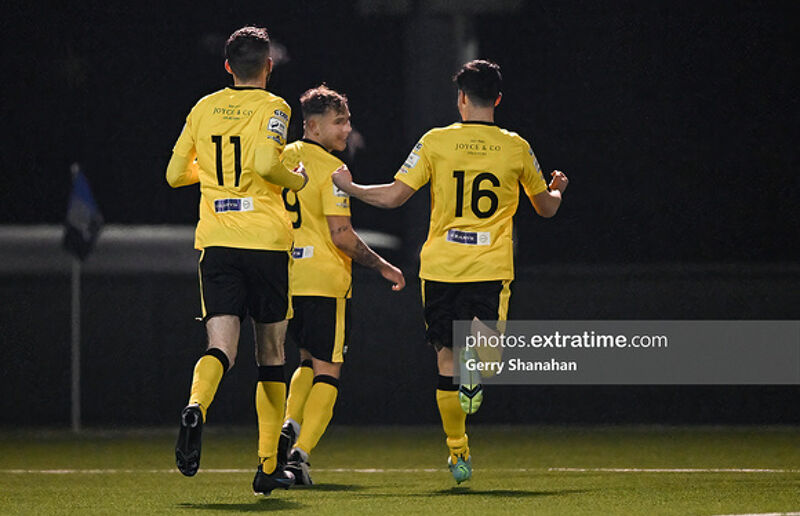 Beineon O'Brien-Whitmarsh (9) and Conor Drinan (11) both scored for Cobh in their narrow defeat in the Cork derby tonight Credit: Gerry Shanahan (ETPhotos)

Cian Coleman proved to be the match winner as his second half header gave his side bragging rights at a packed St. Colman’s Park. It maintains their lead at the top, but they were pushed to the very limit.

Cobh will wonder how they came out of this with a defeat though. Having come back from two down, they hauled themselves level in the second half. Even after going behind again, they created enough chances to claim at least a point.

Cork City brought in Darragh Crowley and Barry Coffey to replace Matthew Srbely and Jonas Hakkinen. Cobh goalkeeper Sean Barron failed a late fitness test which meant that Andrew O’ Donoghue stepped up from the bench. Ben O’ Riordan and James McCarthy came into the side in favour of Issa Kargbo and Harlian Mbayo.

The former was injured against Athlone while the latter was serving a one match ban.

City were seeing plenty of the ball in the early period as they came into the game in confident form. Cian Coleman flashed a header from a Cian Bargary free-kick while a dangerous low cross towards Cian Murphy from Barry Coffey had to be hacked away.

It was no surprise though when City struck for the opener. A low pass caught out the Cobh back-line and Ruairi Keating was able to slot past Andrew O’ Donoghue for the opener. Play had to be stopped briefly after as a flare went off. Cobh almost equalised straight away but David Harrington tipped away a dangerous cross.

The home side did try to mount a response to this but found it tough going. Beinoin O’ Brien-Withmarsh was finding himself isolated much of the time as the likes of Ally Gilchrist and Coleman sweeping up whatever came their way. Murphy thought he had a chance to get away from a clearance by the former. He was called back by a late offside whistle though.

City did add to their lead and yet again it was Matt Healy to the fore. Bargary jinked past a few players on the left side of the box and had a shot. It was blocked and cleared away. Healy was waiting for it though and planted a fantastic volley into the top right-hand corner. Another to add to the goal against Waterford on Monday.

Cobh did manage to get one back almost immediately though. O’ Brien-Withmarsh heading home after a scramble from a corner. It was a smart finish from the former City striker. Murphy thought he had made it 3-1 but his low finish was ruled out for handball.

Jake Hegarty almost caught out City at the near post as they pushed for an equaliser. His low attempt was held by Harrington though. Incredibly City had another goal disallowed. Coffey was the man cursing his luck as his close-range tap in was adjudged to be offside.

Cobh were energised and found an equaliser. It was in bizarre fashion as the ball was played back to Harrington from Gilchrist. He seemed to delay his kick out and the ball rebounded off Conor Drinan and into the net. There were big shouts for handball moments later, but the referee awarded a corner instead.

The game was very much in the balance at this point. It was Coleman who was to put City back in front though. After Murphy had wasted an earlier chance, the City skipper powered home a header from a corner.

Cobh were determined not to be denied though. They should have scored an equaliser but for an incredible sequence of events which saw the ball cleared off the line three times in a scramble. Murphy had chances on the break but was unusually poor with his shot selection. Another ball off the line could have snatched a point at the death.

City hung on to get their first win here since 1989. They welcome Longford to Turners Cross next Friday. Cobh travel to play Bray Wanderers on the same night.