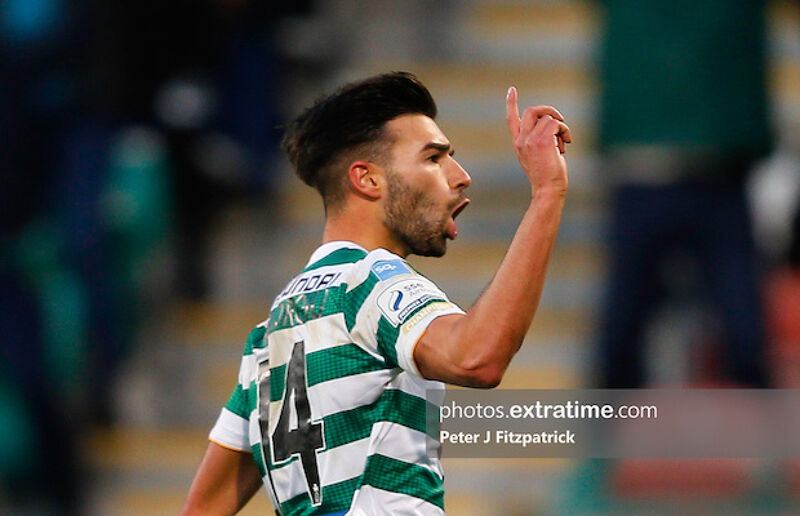 Both Jack Byrne and Danny Mandroiu will feel that they should be in with a shout of getting into the Republic of Ireland squad in June.

It was they who combined mid-way through the second half to give Shamrock Rovers a well deserved three points against their old Dundalk rivals on Easter Monday.

Mandroiu latched onto a wonderful through ball from Byrne to give Stephen Bradley’s side the only goal of the game and an important victory in this season’s title race as they moved to within a point of league leaders Derry City.

It was the Hoops who were the better team for much of the opening half, but it was Dundalk who perhaps had the two best chances to score.

Dundalk deployed usual full-back Sam Bone into the base of midfield while Greg Sloggett occupied a right-wing position, Daniel Kelly led the line in the absence of Patrick Hoban and David McMillan who were both on the bench.

It was Kelly who should have had the away side in the lead after just three minutes. A fantastic delivery from a Keith Ward wide free kick had the Hoops’ defence at sixes and sevens, it was Kelly who reacted quickest, but he could only nod his effort onto the crossbar.

From then it was the champions who took a foothold of the game. Gary O’Neill and Dylan Watts provided a solid platform in midfield whilst Dundalk struggled to cope with the movement of Aaron Greene, Byrne and Mandroiu.

However, it was ex-Dundalk centre-half Sean Hoare who tested current Dundalk goalkeeper Nathan Shepperd as Hoare rose highest to meet a Byrne delivery which Sheppard did well to get down and save low to his left.

Rovers lined up in their usual 3-4-2-1, with Mandroiu looking to provide an option in behind, breaking from deeper positions.

Just before the 20th minute the home side were nearly in front. Former Lilywhite Sean Gannon sprung in behind the Dundalk back four and forced a good save from Shepperd. Watts was on hand to hit the follow up but could not get his effort on target from 12 yards out.

Just after the half hour mark Watts picked out Mandroiu with a fantastic, volleyed pass. Mandroiu cut inside and whipped an effort that just went over the Welsh goalkeeper’s crossbar.

Shepperd did a marvellous job of sweeping up behind his defenders as the away side continued to give the ball away poorly in midfield.

However, the one bit of decent build-up play from Stephen O’Donnell’s side should have had his team in front. Ward played a good ball towards the edge of the 18-yard box. Sloggett stepped over it to allow Kelly to get in behind, but a poor touch saw Alan Mannus smother his effort well.

If Rovers could be accused of ending the first half on the back foot, they started the second period much more aggressively than their counterparts, pinning them into their own defensive third.

They failed to create any chances of note, until manager Stephen Bradley introduced three substitutes just past the hour mark. Barry Cotter, Aidamo Emakhu and Andy Lyons all took the field showing how much strength in depth the champions have.

When Mark Connolly headed an aimless long ball back towards the Rovers midfield, there looked to be little options on. However, Byrne controlled well and displayed just why he is talked about for an international call-up.

An exquisite pass split the Dundalk defence and found the run of Mandroiu, who finished first time. The pass was worth the entry fee alone.

Emakhu was causing problems for the away side with his pace and directness. In front of an onlooking Republic of Ireland under-21 manager Jim Crawford, the 18-year-old went close twice as Rovers pushed for a second.

Hoban and McMillan were called from the bench as the Oriel side went in search of an equaliser. Ryan O’Kane and John Martin were also thrown on in hope of securing a valuable point, but Rovers defended resolutely.

Brian Gartland received his marching orders after going into the book for a second time after a body check on the excellent Emakhu. His centre-back partner Connolly nearly followed him after a reckless challenge just minutes later again on Emakhu.

It proved to be an excellent Easter for the Hoops who claimed all six points on offer, while Derry City could only claim one point. Rovers now make the short trip to Dalymount on Friday night to take on eternal rivals Bohemians, while Dundalk host Damien Duff’s Shelbourne side.