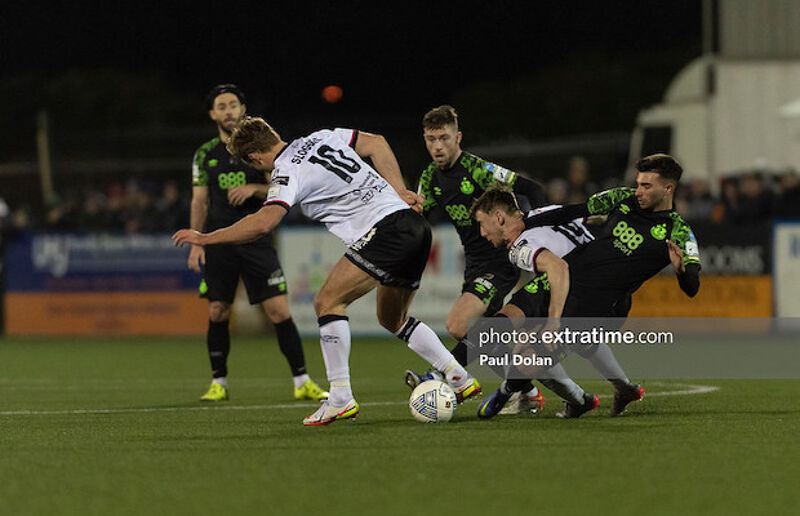 Rory Gaffney grabbed the only goal for Rovers in last Friday’s 1-0 Dublin derby win over St. Patrick’s Athletic in Tallaght Stadium, just like he did when Bohs came to Dublin 24 for the derby in mid-March.

The victory – couple with Derry City’s home defeat to Shelbourne – moved Rovers to within three points of top spot as they welcome Dundalk to Tallaght on Easter Monday (kick off 7pm).

"It's another good win,” was Stephen Bradley’s assessment of the Good Friday victory over the Athletic. “We obviously have a lot of Dublin derbies this year and they add a different dimension to the game in terms of intensity.

Rovers earned their fifth clean sheet of the league season against the Saints, with four of those shutouts secured in the last six games.

“Part of our game is based on keeping clean sheets and on Friday we would like to have made it a little bit more comfortable and taken one or two of our half chance, but we didn't.

“We had to defend as a team and in the second half we did that. We limited them to very little, which was really good."

The Hoops Head Coach handed Sean Kavanagh his first start of the season on Friday.

"I'm delighted for Sean Kavanagh, he's obviously had a tough time of it the last 18 months and he's worked really hard. We know the quality he brings to the team so it was great to get him on the pitch."

Reflecting on Rovers’ last game with the Lilywhites, Bradley said: "They'll be really well organised, we saw that at Oriel Park and they have attacking threats which we saw up there as well. They could have scored one or two. We will be ready for that and then impose ourselves on them as soon as possible.

“We said before the long weekend that our aim was six points. We've started OK with Pat's and it's Dundalk for a chance for pick up another three."

The Lilywhites travel to Tallaght for their second league fixture of the season against the Hoops.

When they met earlier in the campaign, the sides played out a scoreless draw in Oriel Park with Nathan Shepperd pulling off a couple of notable saves (and Leon Pohls, in for the ill Alan Mannus, doing likewise at the other end).

Stephen O'Donnell's side sit third in the table, five points behind Shamrock Rovers. They come into the game on the back of a 2-1 home win against Sligo Rovers on Good Friday.

“We are delighted to win the game,” said Dundalk defender Mark Connolly speaking to his club’s media team post-match on Friday.

“It was a good win for us. Extremely disappointed that we conceded the goal if I am honest. We were in total control of the game for 85 minutes until they scored. A little bit of confidence drops off a bit when they scored and it put us with our backs against the wall.

“The whole team have worked their socks off and have been brilliant over the season so far. It was a good performance, we played some good football and we are delighted to get the three points.

“It puts us clear in third and overall we have played ten games, won three, drawn six and lost one. We have had too many draws there maybe but we have only lost once. We aren’t conceding too many goals either and we have a good team here.

Looking forward to Monday’s match, Connolly said: “It’s going to be a tough game, we are going away to the champions and they had a good win themselves. I would back us against anyone in the country and away to Shamrock Rovers is no different. “

Stephen O'Donnell: 'I think this league in particular, is going to be swings and roundabouts, there’s going to be a lot of teams that are capable of taking points off each other' https://t.co/U8jXHlMgoz pic.twitter.com/udRAnwWPTJ

The Lilywhites last league victory in Tallaght was a 1-0 win in June 2019 with Sean Gannon, then a Lilywhite, scoring the winner. Rovers have won all three league fixtures in Tallaght since that defeat to Dundalk.

This match takes place between the two clubs who have won nine of the last dozen League of Ireland titles.

Rovers haven’t lost at home in the league since a 2-1 defeat to Sligo Rovers last May.