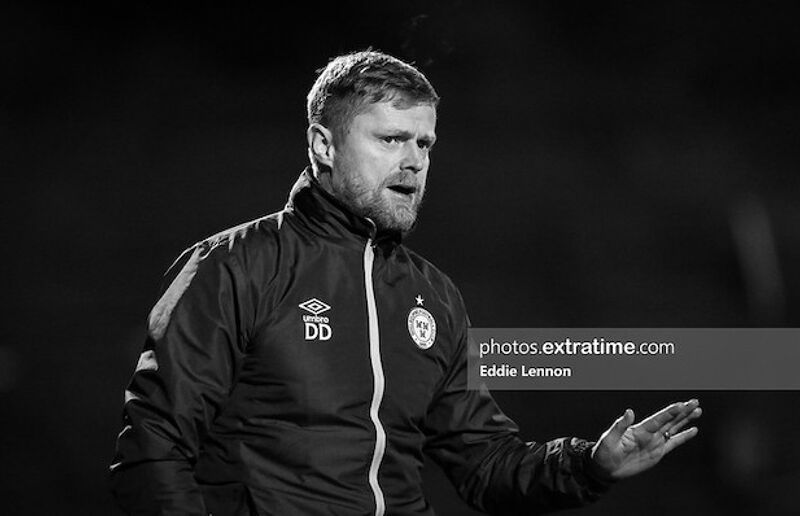 Damien Duff managed his side to a win at the Ryan McBride Brandywell Stadium on Friday night Credit: Eddie Lennon (ETPhotos)

Derry lost their unbeaten run when they went down 2-1 to Shelbourne before a packed Brandywell on Friday night.

The home side completely dominated possession in the opening 45 mins and created some lovely passages of play, with Patrick McEleney and Will Patching in particular pulling the strings in the middle of the pitch.

Their three-man defence had little to do in the opening period and indeed defender Cameron McJannet had time to raid down the left wing on numerous occasions and put in some lovely crosses which caused trouble for the overworked Shels defence.

Three of the Shelbourne defence earned yellow cards in the first half, Adam Thomas, Aaron O Driscoll and Luke Byrne as they struggled to deal with the waves of Derry attacks coming at them from all angles.

The home side struck their first goal in the 30th minute and James Akintunde did very well, taking the ball with his back to goal before spinning O ‘Driscoll and striking the ball into the bottom right -hand corner of the net.

It was all Derry in that opening half, but just as they did against Shamrock Rovers in their previous game, Shelbourne were a transformed team in the second half.

Damian Duff made a treble substitution in the 62nd minute and about five minutes later they were level. Kameron Ledwidge, just as he did against Shamrock Rovers. played a great ball into Shane Farrell who did not have to break his stride as he slotted the ball past Nathan Garthside.

Derry though they had regained the initiative a few minutes later when Cameron Dummigan powered home a header from a corner but it was ruled offside by referee Rob Hennessy.

Shelbourne’s comeback was complete in the 75th minute when one of their substitutes Brian McManus struck a sweet shot from the edge of the box, the ball nestling in the corner of the net out of Garthside’s reach.

Derry piled on the pressure in the last ten minutes but they appear to have lost their composure at that stage and were a little frantic as they searched for an equaliser.

Shelbourne on the other hand grew in confidence and were very composed as they saw out the game and secured possibly their best result of the season.

Both teams will have little time to recover as they now prepare for the Monday night fixtures, Derry travel to face Drogheda Utd while Shelbourne host Bohemians at Tolka Park.