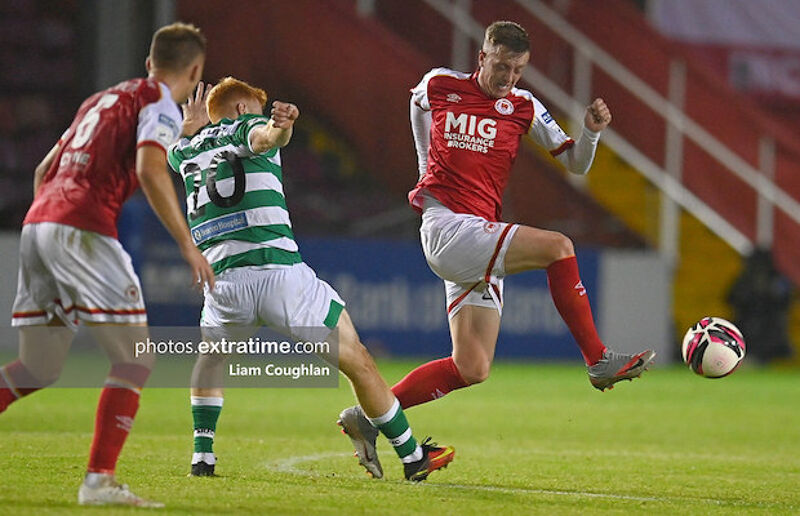 Chris Forrester's header earned the Athletic all three points against the Hoops earlier in the season Credit: Liam Coughlan (ETPhotos)

The Hoops begin the second round of fixtures for 2022 Premier Division campaign sitting second place in the league table.

Rovers have taken 17 points from their opening nine games, six points less than this point last year, and that means they trail league leaders Derry City by a similar margin.

“We’re happy,” said Hoops Head Coach Stephen Bradley when talking about his side’s point total. “We definitely feel that we’ve left some points behind. When you look at where we dropped points we can definitely improve in that aspect in the next round of games.

“But we’re happy because we’ve seen every week that we’ve got stronger and stronger, and we know with this group that they get stronger as the season goes on. That’s always a positive.”

Rovers were grateful for a late Aaron Greene goal last week to win the Dublin derby against Damien Duff’s Shelbourne at Tolka Park. Andy Lyons’ second minute goal for the Hoops had been cancelled out by a second half Shane Farrell goal for the Reds.

“We made a really good habit of it the last few years and thankfully we were able to do it again on Friday night,” said Bradley about the late winner last week.

“It was a brilliant start (to the game) and Andy has been a real threat for us from left or right, whatever side he’s playing on and thankfully he came up on Friday with another goal.”

The Hoops had hoped to stretch out their lead in a first half that they dominated but failed to beat Brendan Clarke again before the half time whistle.

Speaking about Greene’s 88th minute goal, Bradley said: “It was really calm from him. The touch inside and he lets the defender go and opened up the room to shoot. So, it was really good composure from Aaron.”

Ahead of this Easter weekend’s double header (Rovers face Dundalk at home on Monday evening), Bradley will be able to call on Pico Lopes who is now clear of coronavirus but Graham Burke is out having injured his calf in Tolka Park.

The Rovers boss will be thankful of having Lopes available against a team who he rates going forward.

“We saw on the night at Richmond that attacking wise they have some good players,” said Bradley about the opening night defeat. “They can cause you problems. So, I expect more of the same.”

The Saints travel to Tallaght having earned earlier in the season their first win over Rovers since 2018.

Saints skipper Chris Forrester got the winner in the 54th minute in front of 4,871 spectators in Richmond Park.

Another win for the Athletic on Friday and it would see the Saints join second placed Rovers on 17 points.

“We beat them 1-0 in the corresponding fixture at Richmond earlier in the season and it was a huge win for us,” admitted Saints manager Tim Clancy.

“Rovers were very good that night as well so it's going to be a very difficult game but it's one that we have been planning for since the game on Friday so we are looking forward to it."

Last week, the Saints played out a scoreless draw with Dundalk in Richmond Park.

They will have a three day turn around after the match in Tallaght, as they travel to the UCD Bowl to round off their Easter weekend on Monday.

"It's another Dublin derby,” said Clancy about the game against the back-to-back champions. “There's plenty of them this season and obviously it's the first game of the second round now so we are looking forward to it.

“It was a really good game out in Tallaght in the President's Cup. It's going to be a brilliant pitch and atmosphere so really looking forward to it.”

For Darragh Burns, it is a game that he describes as “always a big one”. Burns has scored twice and provided two assists in the opening nine fixtures for the Saints.

“We got the 1-0 win over them at Richmond. I can remember how sore my legs were after the last game against them because we worked so hard. The boys put in a shift that night.

“It was a massive win for us and first time to beat them in a while so hopefully more of the same on Friday.”

MATCH STATS
The Athletic haven’t won a league fixture in Tallaght for six years. Their last victory came in March 2016 when goals from Billy Dennehy and Christy Fagan gave them a 2-0 win.

This is the third fixture of 2022 between the sides. Away from the league, the two teams met for the curtain opener for the season in the President’s Cup. Rovers prevailed on penalties to lift that trophy for the first time. The game finished 1-1 after 90 minutes after Ronan Finn cancelled out Eoin Doyle’s goal. Chris Forrester peno miss proved crucial as Rovers won 5-4 on penos, with Jack Byrne scoring Rovers’ fifth and winning penalty kick.

The Saints finished second in the league last year, 11 points behind the Hoops.