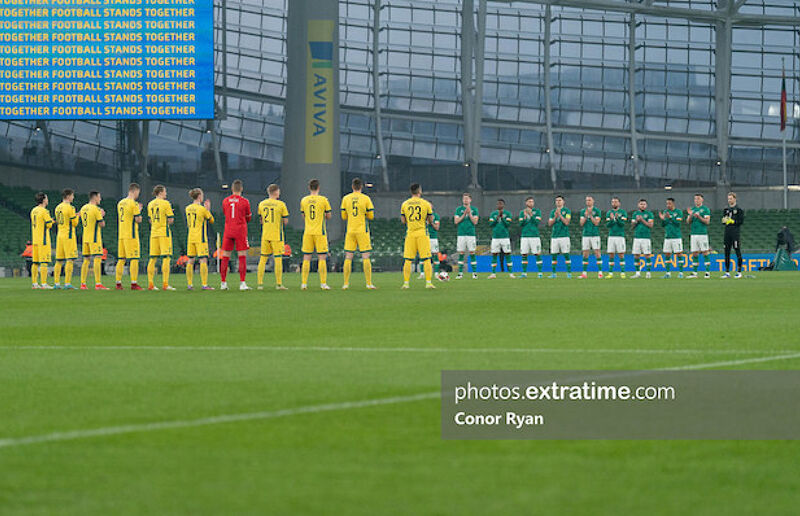 Lithuanian and Irish players applaud in support of the people of the Ukraine Credit: Conor Ryan (ETPhotos)

Due to the ongoing war in Ukraine, UEFA have confirmed re-arranged fixtures for the Ukrainian football team for their World Cup play-off against Scotland and updated Group B Nations League games involving Ukraine, Republic of Ireland, Scotland and Armenia.

UEFA, FIFA and the football associations all came together to agree the updated scheduled that will mean Stephen Kenny’s Ireland side will begin their Nations League campaign in Armenia on Saturday June 4.

The FIFA World Cup play-off between Scotland and Ukraine will be played on June 1, with the winners set to play Wales on June 5.

Ireland’s first UEFA Nations League fixture will be away to Armenia on June 4 with Ukraine set to visit Dublin four days later. The third game for Ireland in the busy June window will be home to  Scotland on Saturday, June 11.

The final summer fixture for the Boys in Green will be a match ‘away’ to Ukraine on June 14 - the venue will be agreed in consultation with the Ukrainian FA and UEFA.

Ireland’s September matches have also shuttled around with Ireland's away match in Scotland now taking place on Saturday, September 24 and will conclude in the Aviva against Armenia on Tuesday, September 27.

“The FAI and European football stand with the people of Ukraine and we look forward to welcoming them to Dublin on June 8,” said FAI CEO Jonathan Hill.