Courtney Brosnan: ‘A draw away in Sweden is amazing’ 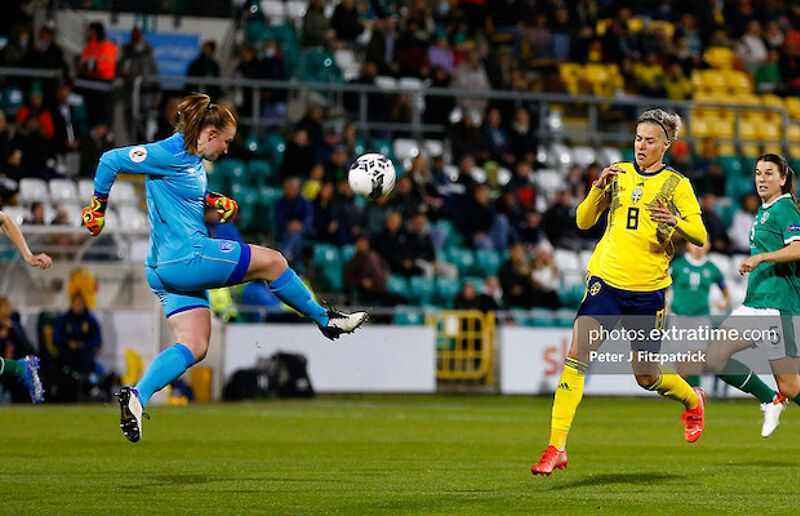 The Irish player of the match award from Ireland’s 1-1 draw away to Sweden went to skipper and goalscorer Katie McCabe but Courtney Brosnan’s display in goal had plenty calling for the ‘keeper to get that accolade.

In particular her save just after the hour mark from Filippa Angeldal was a stunner.

The Manchester City player’s shot brought the best out of Brosnan as she pushed the drilled effort onto the crossbar.

Throughout the game the goalkeeper marshalled her players in front of her and when required came through traffic to catch or punch clear.

“We were all ready,” said Brosnan about her team’s preparation for taking on the world number two side.

“We had the game-plan and we tried to do everything we could to get the result.”

Chloe Mustaki delighted with draw in Sweden but ‘it means nothing if we don’t get anything’ from final games https://t.co/r9ndMmfx03 pic.twitter.com/sB1ZV9iIyp

There really wasn’t anything that the 26-year-old netminder could do about the Sweden goal as a move involving Angeldal and Olivia Schough was finished superbly by Kosovare Asllani 11 minutes from time.

“A draw away in Sweden is amazing and I was just doing everything I could to help the team, make the saves when needed and everything like that."

While there is great competition amongst the Ireland goalkeepers for the number one spot, from the netminders who travelled to Sweden have limited international experience. In total they only 22 caps between them.

Áine O'Gorman has 112 while the Swedish skipper Caroline Seger has 229 alone.

The Everton goalkeeper admitted to having some nerves ahead of the game where she earned her 12th international cap.

"You get a little bit of nerves before a game, but it's always the same,” said the New Jersey native. “You just have to focus on your task and what you have to do, and not think too much about emotions.

"As soon as you get that first touch, whether it's a save or with your feet, you obviously settle in and say, alright, whatever the crowd or game is, you are here to play and you are ready.

“I had one quite early on and it was great to claim one of those balls and just be able to relax into the game."

Sweden laid siege to the Ireland goal – with 17 attempts on goal - but the girls in green defended excellently as a unit in front of Brosnan. Her teammates were full of praise for the ‘keeper.

Speaking after the game skipper Katie McCabe said her goalkeeper made some “world class saves”. Megan Connolly called it as “Courtney had a fantastic game” while

Megan Connolly on how they stopped Sweden: ‘We had seen footage and they leave that space open sometimes’ https://t.co/DP9nUSVJep pic.twitter.com/5uKDpQ2eXW