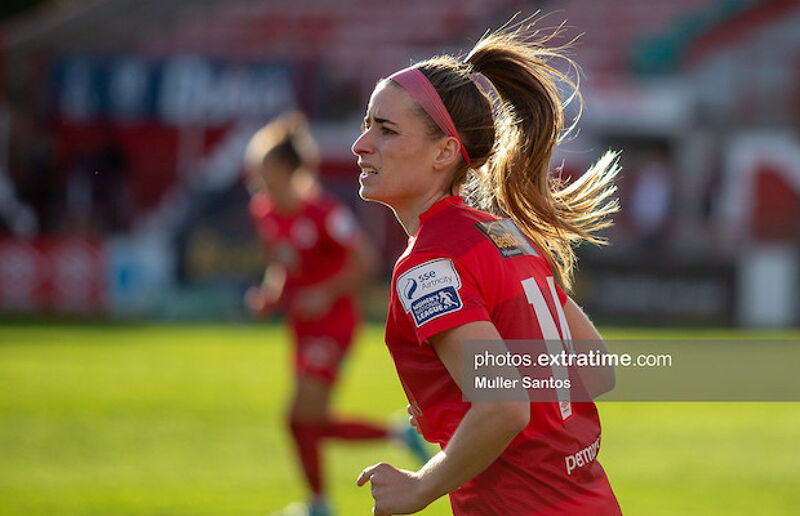 Serious illness in 2014 and a cruciate knee injury sustained on the eve of what was expected to be her first Ireland game in 2020 meant she only finally earned her first cap in a friendly in February.

The 26-year-old player spoke about her journey and the emotion of her debut after that match - ‘When the messages were coming through on my phone, I definitely had tears in my eyes’.

Following that fairly low key affair against Russia in the Pinatar Cup in Spain, Vera Pauw propelled Mustaki into her staring line up against the world number two side Sweden on Tuesday night.

The defensive arrangement against the Swedes was something Pauw had to ponder about as her team were suffering an injury crisis at the back while taking on the best team in Europe.

Megan Connolly was deployed in an unaccustomed defensive role and the Brighton player spoke after the match about how Ireland expected Sweden to overload Ireland on the wings.

Megan Connolly on how they stopped Sweden: ‘We had seen footage and they leave that space open sometimes’ https://t.co/DP9nUSVJep pic.twitter.com/5uKDpQ2eXW

Speaking after the game Mustaki said their aim was to keep the Olympic silver medalists out in front of the Ireland defence. The Shelbourne player was facing on her wing Juventus Lina Hurtig and Bayern Munich’s Hanna Glas.

“The main thing we talked about was keeping them in front, trying to avoid balls in behind. They got in a few times but we managed to control that. We managed to sustain a lot of pressure.”

During the week Mustaki knew she was in with a chance of starting but confirmation only came at lunchtime on matchday. She lined up on the left of essentially a back five playing behind captain Katie McCabe who was pushed more forward than her usual Ireland position.

“It is all about who performs well in training. But it is good to have another lefty on that side, to kinda help Katie and be able to whip a ball down the line. I think I was a natural choice but I had to prove that over the week.

“It wasn’t just a case of a lefty just slotting in, everyone has to prove themselves. She (Vera Pauw) was trying out myself and another player in the position, but in the end, she went for myself, which I was delighted about.

“It was my first competitive start and a tough one for me but a great one to get and hopefully there will be more to come.

“I was fairly nervous but once you get into warm-up and get a touch of the ball and you start getting some passes in, the nerves start to settle and it becomes another game of football.

“The fact we were playing the world number two did take the edge off things. There wasn’t much expected from us. We just had to get what we could out of the game and everyone put in a massive shift."

Courtney Brosnan: ‘A draw away in Sweden is amazing’ https://t.co/ayLwh971ff pic.twitter.com/FTA4vsfpEy

Mustaki ran over 10km in a game where Vera Pauw made just the one switch – with Leanne Kiernan coming on late in the game in place of Heather Payne.

“It was important we kept communication, kept tight between the lines, shifted as an unit and we did that as best as we could.”

Ireland had taken a lead into the half-time break after Katie McCabe’s late goal but the Irish players knew that the home side, playing in front of 12,123 spectators, would take it up a notch in the second half.

“We had to sustain a lot more pressure than we had in the first-half, which was already quite a lot. Sweden really needed to get a point to secure qualification. They didn’t want to wait another game to get that, so we knew they would come out really strong to get that.”

The girls in green held out till 11 minutes from time before they were undone by a sweeping Swedish move that was rounded off by Real Madrid’s Kosovare Asllani.

Katie McCabe: ‘Sometimes you create you own luck and we did that tonight’ https://t.co/dqYyeOz10A pic.twitter.com/AhxsckcUo5

As happens after the final whistle in every Irish game, the team gathered in a huddle out on the pitch. So what was said in the Gothenburg huddle?

“Just we are all so proud of each other.

"To put in a performance like that, to get a point against the world number two, it is a credit to the staff and a credit to the players as who worked so hard – we put in such a massive shift.

“And even the girls who didn’t play too; the week of training was so competitive and it has given Vera a massive headache in certain positions. Everyone is working hard and pushing each other and that allows us to put in a performance like that.”

Pauw has tailored the team’s preparations specifically to taking on teams like Finland and, in particular, Sweden who are ranked above the girls in green.

Ireland had played a series of friendly matches before the start of the World Cup qualification against high quality opposition and while results didn’t go their way – losing seven in a row – those games have helped Ireland prepare.

Pauw has also advocated her players training with men’s teams. Last week, in Abbotstown they had a training game against the Ireland under-15 boys side.

“When we played the boys, it brought us to a new level and it allowed us to be ready for the Sweden game. It gave us a bit of a shock.

"It allowed us to wake up a little bit and realise that the pace of the game is going to be a lot quicker against Sweden than most of us are used to week in and week out. That game was definitely needed and was great prep for tonight.”

There were plenty of positives from the 1-1 draw in Sweden but Mustaki recognises that the team needs to follow through in their final three games and secure runners up spot in the group. That would earn them a place in the play-off for next year’s World Cup.

“The big games are the ones we have left to do. We still have shifts to put in against Georgia and particularly Finland and Slovakia. This (result) means nothing if we don’t get anything out of those games and we have to remember that. We just have to do the business there as well.”