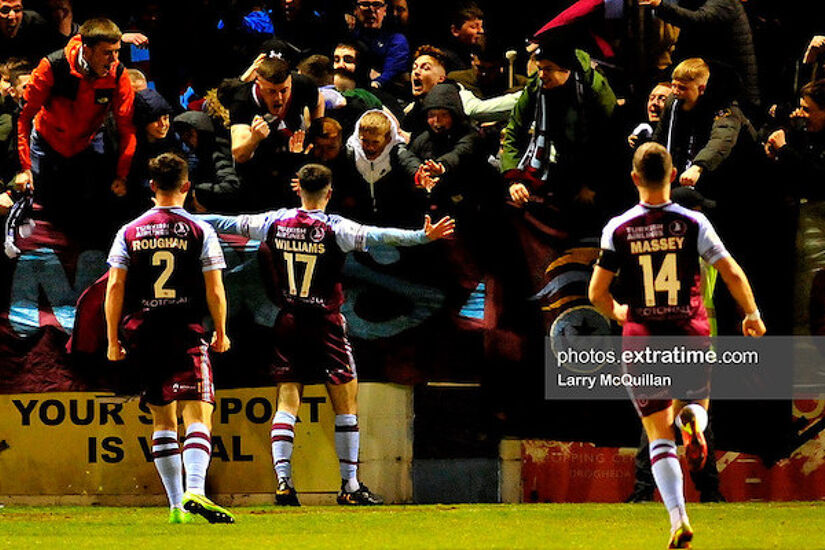 Dean Williams: ‘I’ve always wanted to come off the bench as a striker and score’

Rónán MacNamara reports from Head in the Game Park

Dean Williams was thrilled to bag a late equaliser for Drogheda United on Friday night and is hungry to kick on and score more goals this season.

Williams was introduced as a substitute and his goal snatched a 1-1 draw for Drogs at home to Bohemians.

“I’m delighted to get on the scoresheet and hopefully I can keep it going,” said Williams.

“It was always in my own mind, something that I’ve always wanted to do was come off the bench as a striker and score.

“I don’t think I’ve done it as a senior player so I’ll enjoy that one tonight.

“Coming off the bench when you’re one down it’s obviously hard but your job is to score goals and thankfully I did that tonight.”

Drogheda sit eighth after the first series of Premier Division fixtures with two wins, three draws and four defeats from the nine games.

It was a testing week for Kevin Doherty’s side who had to play three times in seven days with trips to St Patrick’s Athletic and Finn Harps coming before their home game against Bohs.

Williams feels the team are relatively happy with how the last few games have gone - the Boynesiders are unbeaten in the last four games.

“I think the draw away to Pats was a good point on the board. Considering the game up at Finn Harps, with the wind, the rain and everything against you it’s not too bad going up there and getting a draw.

“When you are one down tonight, it’s not the end of the world it’s another point on the board that’s the way we look at it.”

Williams impressed in a brief loan spell at Longford Town last season before making the move up the M1 from Shamrock Rovers to Drogheda in the winter where he has been reacquainted with former Longford boss Daire Doyle.

The striker admits Doyle played a huge role in bringing him to the club and he feels at home with the Boynesiders.

“I think Daire is a great coach and he’s part of the reason why I’m here at Drogheda he knows my game so that helps the manager when he’s choosing the team.

“It’s been great. I have three goals now and I have plenty more to get but I am really enjoying it the training is great the two managers and the players have gelled well together so hopefully we can keep it going.”