Megan Connolly on how they stopped Sweden: ‘We had seen footage and they leave that space open sometimes’ 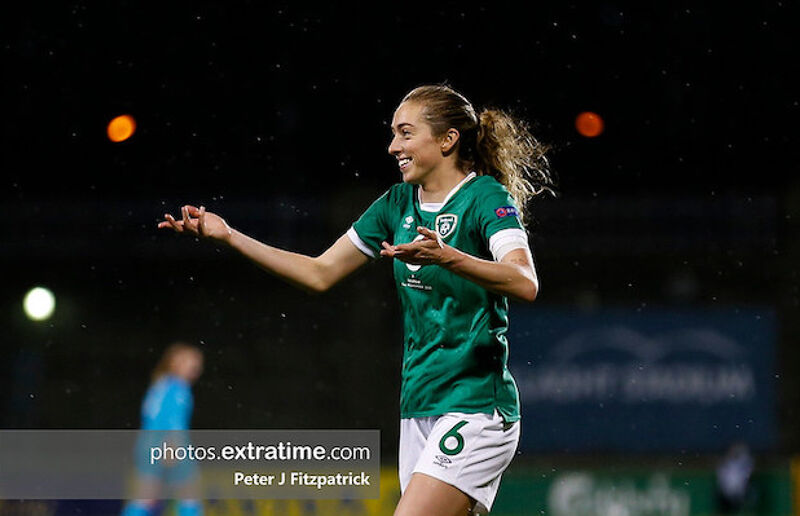 When Vera Pauw was asked about the ‘How to Stop Sweden’ jersey on the eve of the game in Gothenburg, the Ireland coach was quick to say she didn’t need to read the analysis printed on the kit detailing how to break down the world number two side as she has performance analyst Andy Holt on the case.

The Republic of Ireland got a rich reward last night in the 1-1 draw in Gothenburg by spotting a flaw in Sweden’s set up for defending free kicks. Megan Connolly explained that Katie McCabe’s deflected goal came from a set piece move they went with following analysis of their opponents.

“We had seen footage with Sweden and they leave that space open sometimes,” said Connolly speaking after Tuesday’s game at the Gamla Ullevi Stadium.

Standing over the free kick with Katie McCabe late in the first half, Connolly dropped out wide right and picked up the pass to put the ball into the box. She found Lucy Quinn’s head before Denise O’Sullivan got on the second ball to set McCabe up.

“We tried it and Katie just played the free to me and Dee kept it alive when the ball went in and any shot on goal can take any deflection and Katie took her shot. We will take it, we take any goal we get.”

With Ireland’s defensive injury crisis, Connolly was deployed in an unusual position for the Brighton & Hove Albion player – as part of a back three.

“To be fair when we came into camp, I knew that was where Vera wanted to put me. I trained all week to try and do my best in there and gain some confidence.

“When you have Niamh Fahey and Chloe Mustaki around you, Katie McCabe and Denise O’Sullivan in front of you and Courtney (Brosnan) in the back, you have people who are going to help you out.”

Katie McCabe: ‘Sometimes you create you own luck and we did that tonight’ https://t.co/o36hJZUVK0 pic.twitter.com/BdFWOmRgDG

The odds were stacked against Ireland taking any points from the trip to Gothenburg when taking on the best team in Europe and the silver medalists from last year’s Tokyo Olympics. The Swedes hadn’t dropped points at home in a qualifier for a dozen years.

“Sweden are a quality side. They are second in the world, and so for us to come away with a draw when we might have got the win is massive for us. You couldn’t take a second off as they had runners off every shoulder.

“They are relentless, you clear the ball and another one comes back in. They are switching play and have runners on the back line. Courtney stepped up and kept us in it with one or two (saves) and that is what you need from a goalkeeper.

extratime.com asked Connolly about the crucial part communication played in that defensive play and she was quick to praise Louise Quinn and the hard work done in midfield.

“I think Lou is the heart of the defence. I think she sets the line, sets the tone and she starts the communication.

“She keeps talking, I talk, Niamh Fahey talks and it gets us to keep going. We encourage each other. The midfield in front, they do that too. But Lou did unbelievable, controlling that back-line. The headers she won against a lot of tall players was very important.

“Midfield is so key for us. Dee and Ruesha (Littlejohn) have a tireless job at times, you don’t see the effort and work put in midfield shifting across, closing the spaces so they don’t get through. I thought Dee and Ruesha did that really well.”