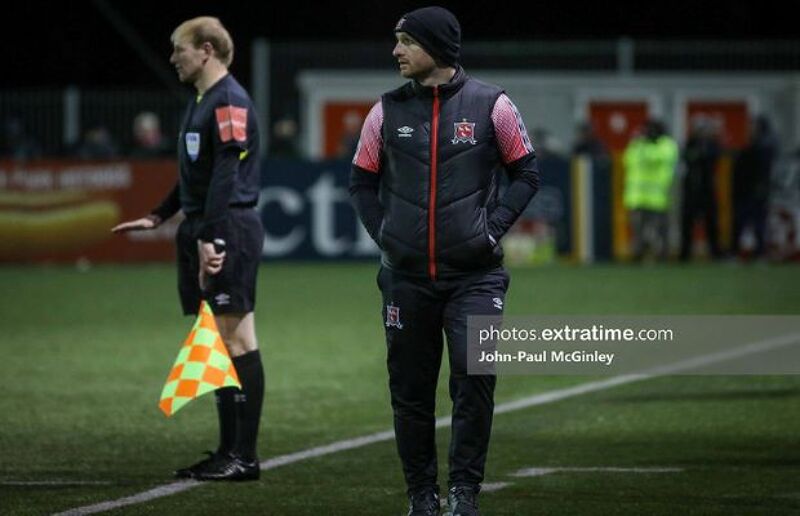 St Patrick’s Athletic come into this game on the back of a draw and a loss and Tim Clancy will be hoping to return to winning ways against his predecessor Stephen O’Donnell’s Dundalk.

The Saints sit third in the table but seven points off Derry City at the summit. Assistant Manager Jon Daly knows that Dundalk will be a tough challenge but is expecting another fantastic atmosphere at Richmond to get behind his side.

"Dundalk have good experience. You probably look at their side and it's probably a little different to ours. We are very youthful with a couple of senior pros in there and they've probably got the majority of senior pros and they are good, experienced ones that know and understand the game.

“Defensively, they are quite solid, that's probably why they have drawn a lot of games. They have some good ball-playing midfielders and up front, they have an attacking threat that can score goals. We expect them to be well up for the game.

“We need to make sure that we match that and bring an energy to the stadium as well and I'm sure the fans will be behind the players."

Defender Tom Grivosti has impressed so far this season and has formed a good partnership at centre-back alongside Joe Redmond and expects a tough battle against the Lilywhites.

"Dundalk are a good team. I know a few of their lads who have played in Scotland, I played with Andy Boyle too. They are a good outfit, they've got decent players so I expect a tough game.

In team news, Jamie Lennon continues his recovery from foot surgery while Paddy Barrett will also miss out through injury.

Dundalk recorded a 2-0 win over UCD at Oriel Park, a result which leaves them just two points behind Tim Clancy’s side. It was the first win for the Louth side five attempts.

The game also marks the return to Richmond Park of former Saints coach O’Donnell and his assistant Cregg as well as Robbie Benson and Sam Bone. O’Donnell isn’t expecting a warm reception.

“There’s been a lot of talk since I came to Dundalk so I’d imagine there’ll be a good atmosphere and it’ll be hostile,” he told dundalkfc.com. “I can’t control any of that, I’m more looking at the team, the game and the football side of it.

“There’s been a lot of stuff said, not from my side, so I'm sure it will lead to a good atmosphere which is good for the league as it generates a bit of interest.

“I get a bit of stick at most grounds so I’m well used to it. It’s part and parcel of football and I think it’s better for that. It would be worse if there was no emotion and it was all mundane.

“I had a great relationship with a lot of the staff and a lot of the players at Pat’s and the fans were very good to me. Ultimately, I’d like them to think of where the club was when we came in and where it was when we finished, as runners-up and winning the cup on one of the most memorable days I’ve had in my career.”

O’Donnell is focused on his team’s performance over pressure for results.

“It’s a big game at Richmond Park but we don’t put pressure on our lads to get three points and win games. It’s more their performance and work rate where we put the pressure on them. If they live up to that, then you can’t ask any more from them and they will be competitive in most games they play.”

In team news, John Martin is back in the squad after missing the victory over UCD with a knock while John Mountney is closing in on a return from the knee injury he sustained playing for Pat’s in a 1-0 win over Dundalk at Oriel Park last August. Nathan Shepperd, Joe Adams and Dan Williams only came back the day before the UCD match so they have had a good week of training under their belts.

Pats and Dundalk first encountered each other in the league during the 1951/52 season. After a 1-1 draw in Dundalk, Pats recorded a 5-2 win at home.

In the 1954/55 season Pats beat Dundalk 10-3 and it remains the highest scoring game between the sides.

Dundalk’s biggest win over Pats came in 2017 with a 6-0 victory. Two of the goalscorers, David McMillan and Robbie Benson, are still playing with the Lilywhites.