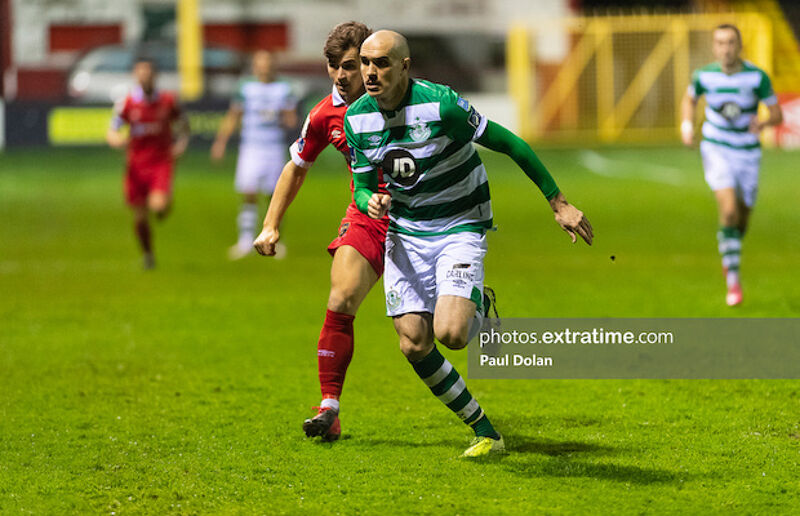 The Reds recorded arguably their best result of the 2022 season last weekend when they travelled to The Showgrounds and overcame Sligo Rovers on a 1-0 score line.

An away win against a top four team is a notable achievement for any side but for Shelbourne it carried extra significance as it was only their second victory of the season and also their first against one of the early-season top four sides.

The timing was also perfect for Damian Duff’s charges as it came in advance of their home match this Friday night against back-to-back league winners Shamrock Rovers.

The game in Sligo was far from being a classic and Shelbourne’s own performance was not one of their best this year, however they did get the only goal of the match and also deserved to claim all three points.

Dan Carr scored their goal from a penalty after full back Conor Kane was fouled in the box by Karl O’ Sullivan, referee Ray Matthews having no hesitation in awarding the spot kick.

Speaking to his club’s media team during the week, Damian Duff said that win in Sligo has been “parked” and that all focus is on getting a first home win of the season tomorrow night against the Tallaght side.

“It’s important not to get too high or too low after wins and even after a disappointment like we had at home to Finn Harps (losing 3-0),” said Duff.

“The belief here is that we can beat anyone and whether we do or don’t is another thing but we go into each game believing we can win it,” he added.

“There’s been great energy around the camp and we’ll be up for the occasion and getting our first home league win on the board,” Duff said.

“We know what to expect and we’ve planned for that but the most important thing is to believe.”

The Hoops have made a solid if not spectacular start to the 2022 season, and although they are currently conceding the top spot in the table to unbeaten Derry City, they are still sitting comfortably in second place, albeit six points behind the league leaders.

Head Coach Stephen Bradley will not be unduly concerned by their absence from their familiar position at the top of the league table as it allows all the pressure to be focussed on high flying Derry City.

Rovers have actually scored the same number of goals as the Candystripes (13), while both teams also have almost identical defensive records. Rovers have only conceded six goals in the opening eight games, one more than Derry who are on five goals against.

The Hoops scored three of their 13 goals in their last outing away to Finn Harps in Ballybofey last Friday night.

Andy Lyons scored twice in Donegal while Graham Burke netted the third from the penalty spot, beating stand in keeper Bastian Hery who was deputising for the red carded Mark McGinley.

“We know Tolka, when it’s a full house, it’s a brilliant atmosphere and I’m sure it will be on Friday. Throw in that it’s a Dublin derby and that adds to it. We’ve quite a few of them this year [derbies] – they’re good, competitive games and Friday will be no different. So, we’re really looking forward to it.”

The last clash between these two sides was back in November 2020 when Rovers won by 2-0 in the final game of the 2020 campaign. Jack Byrne and Aaron Greene scored the two goals in that match which was played in Tolka Park.

The bulk of the Rovers team that played in that match are still lining out for the Hoops while Shane Farrell and Brian McManus are the only two remaining Shelbourne players in Damian Duff’s current squad. Joey O’Brien played for the Hoops that night and is now part of the coaching team at Shels.

Andy Myler after Derry defeat: ‘It will be interesting at both ends of the table. Absolutely there is a title race.’ https://t.co/QHRd94jy11 pic.twitter.com/URuTOog3Md