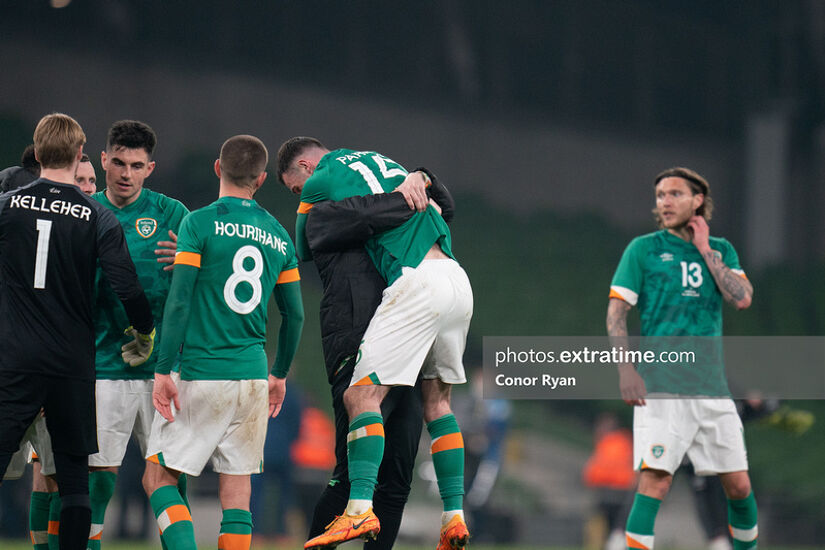 Troy Parrott celebrates at the end of the game Credit: Conor Ryan (ETPhotos)

A 97th-minute stunner from Troy Parrott brought the house down at the Aviva Stadium as the Republic of Ireland beat Lithuania 1-0 in dramatic circumstances.

A 25-yard thunderbolt from the MK Dons attacker broke a stubborn Lithuanian resistance and ensured Ireland ended their March International window on a high with a deserved win.

It was a night that could have ended in frustration as the Boys in Green couldn’t beat the offside trap. Chiedoze Ogbene twice had goals chalked off by the linesman either side of a disallowed Conor Hourihane effort.

Substitute Scott Hogan finished neatly in added time but he was also denied by a stubborn Lithuanian high line.

It’s now one loss in twelve games for the hosts who snatched elation from the jaws of frustration.

The Republic of Ireland headed into the game with just one loss in their last eleven games and were looking to score two or more goals for the third game running for the first time since 2014 under Martin O’Neill vs Oman, Georgia and Gibraltar.

Lithuania, who had never beaten Ireland in four attempts, kicked off their centenary celebrations with a 2-1 win over San Marino on Friday.

Ogbene’s name was cheered loudly pre-match and when he was replaced and he thought he had sent the South Stand crowd into raptures when he turned in Ryan Manning’s cross but the offside flag cut short the celebrations after a brilliant team move that started with Liverpool goalkeeper Caoimhín Kelleher.

That was as good as it got for Stephen Kenny’s side in the opening half as Lithuania remained stubborn without venturing forward too frequently.

Ireland’s football was pretty on the eye with Callum Robinson dropping deep to provide combinations for Alan Browne and Conor Hourihane but visiting stopper Dziugas Bartkus wasn’t forced into any meaningful action.

Manning had a couple of long-range efforts before Wigan Athletic bagsman Will Keane couldn’t mark his big night with a goal when he glanced Hourihane’s curling cross over.

The midfield performance from Ireland was impressive at times and Browne displayed some dazzling footwork to launch the first assault on the Lithuanian goal in the second period. His pass found Matt Doherty and his pullback was expertly tucked away by Hourihane, but the offside flag foiled the Cork man as Robinson was in the goalkeeper’s line of sight.

Stephen Kenny’s charges favoured the right flank in the early stages of the second half and Doherty, a relative spectator in the opening period produced a fine stop from Bartkus after a marauding run into the box.

The Spurs wing back looked the most likely for the Boys in Green and he fired over after play was momentarily stopped for selfie time at the Aviva as a plucky streaker seized an opportunity to catch a snap with Kelleher.

Despite playing some free-flowing football at times, Ireland perhaps showed a lack of patience as substitute James McClean was caught offside when he really should not have been. Fellow substitute Troy Parrott did well to slip him in and Ogbene’s tap-in was waved away by the flag.

Roared on by the 32,000 strong faithful, John Egan went close with a header as the game entered the dying embers.

Parrott who was lively since his introduction produced a fabulous save out of Bartkus in added time before Doherty volleyed narrowly wide from the resulting corner. A stalemate beckoned.

But Ireland and Parrott wouldn’t be denied as the MK Dons man on loan from Spurs sent the Aviva into raptures with a sensational strike with the last kick of the game to bring his international tally to three.

“There’s only one Stephen Kenny” rang out at full-time by a crowd who more than once played their part with some incredible support as the game ticked towards full-time.

Perhaps more of the 32,686 in attendance might have left early had recent results not been going the way of Kenny’s men but such is the momentum and belief among both fans and players, it made for a terrific atmosphere in the closing stages.