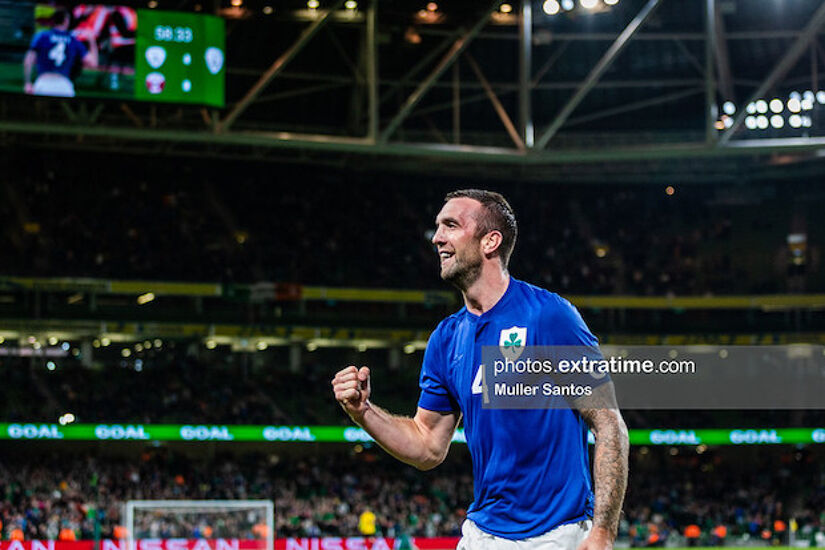 Shane Duffy: ‘We all believe in Stephen and I think the progression we have made over the last two years is there for everyone to see’

Shane Duffy says that the uncertainty surrounding Stephen Kenny’s contract as Republic of Ireland manager was never a concern and feels that topping the UEFA Nations League group is a realistic goal for the squad.

After intense speculation throughout 2021, Kenny finally put pen to paper on an extension through to the end of EURO 2024.

Duffy has backed the decision believing the Republic of Ireland can build on the momentum gathered towards the end of the 2022 World Cup Qualifying campaign and attack their Nations League group with the ultimate goal of qualifying for the European Championships.

“For the players it wasn’t a massive issue [the contract], we always believed he was the right one for the job. It’s nice that it’s behind us and we can move forward,” said Duffy speaking to the media ahead of the upcoming friendlies against Belgium and Lithuania.

“The aim is for the Euros and that’s the end goal, we have a plan in place and it is up to us to do it.

“It’s exciting we all believe in Stephen and the coaching staff here and I think the progression we have made over the last two years is there for everyone to see so there is great excitement. I am happy Stephen is still here and I think I speak for everyone in the squad. We are all going the right way.

“I think we can go and do well in the Nations League. We can go and win the group and that’s not getting ahead of ourselves I think the way we are going and the belief we have we can win it and that would be a successful start.

“That’s what we have to start believing in and aiming for as a country, winning groups and qualifying for tournaments and that’s the belief the country has and why not? You can see the progression we are making, we had a difficult start but we said the young players would benefit from that and you are seeing that.

“We are picking up results and hopefully we can go on and win the Nations League group and go through the qualifying campaign and set a standard for ourselves and give the whole nation a buzz,” he added.

Duffy is one of the elder statesmen in Kenny’s young squad and he will be 32 should Ireland qualify for the 2024 European Championships. The Brighton and Hove Albion defender doesn’t see his age as an issue and hasn’t ruled out appearing at EURO 2028 if Ireland qualify where he will be 36.

“We are not naïve in football, the younger ones coming through they push you and I am excited,” he said. “We don’t know how it’s going to go, age is just a number I saw John O’Shea and Robbie [Keane] play at the ages they were.

“Every chance is big to play for your country at major tournaments. You never say never I have seen players play until their 40 or 37, 38 so I am still at a good level and playing well at a high level.”

In contrast, Duffy’s Brighton teammate Evan Ferguson is at the opposite end of his fledgling professional career having made his Premier League debut for the Seagulls at the age of 17 last month.

The former Bohemians striker who famously made his debut aged 14 in a friendly against Chelsea has been part of Jim Crawford’s U21 side this week and Duffy sung the praises of the starlet while stressing the need for patience.

“Evan is a great lad. He has really impressed me and the lads, he’s with us full time and I have seen a big difference in him already in the five months that he has been with us everyday.

“He’s a big, strong boy for 17 and sometimes I forget he’s only 17. It is exciting for us [Brighton] and exciting for Ireland so we have to be patient and let him develop. For me, the kind of character and player he is he has a massive future.

“Be patient and let him come through when he is ready.”

Shane Duffy: ‘There are low points in a career and I have had mine. You just have to have the mental strength to come out of it.’ https://t.co/rJQkmMDqmq pic.twitter.com/cKdlSWqLC7