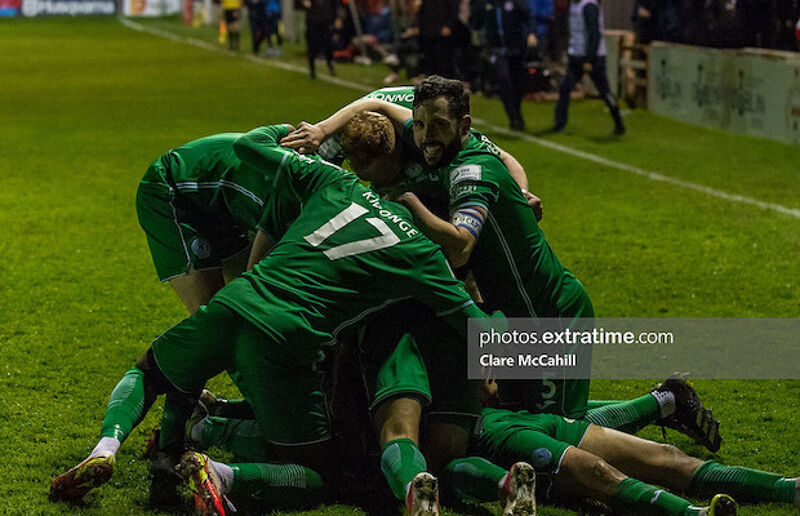 Finn Harps recorded their first win of the 2022 season when they comprehensively beat Shelbourne 3-0 at Tolka Park on Friday night.

Harps came into this game on the back of a winless five game streak but they certainly picked up their first three pointer in style as they totally outplayed the hosts and were fully deserving of the three-goal margin at the final whistle.

Ollie Horgan’s side seemed very fired up from the start of the match and they displayed their superiority on the night throughout the 94 minutes of action and at times made Shelbourne look very ordinary indeed.

Shels looked surprisingly sluggish in the first half and although they improved in the second half, they never really caught fire and matched Harps’s desire, a trait that will worry manager Damian Duff and his assistant Joey O’ Brien.

The Donegal side set the tone from the outset, winning the first of numerous corners within 50 seconds of the first half. The corner kick eventually made its way to Filip Mihaljevic whose overhead kick grazed the cross bar before going wide.

The Croatian was to prove a handful for Shels full back JR Wilson throughout the game and indeed was the source of their opening goal just before the half time whistle. Mihaljevic danced past Wilson in the 44th minute and his pull back arrived in a crowded box where Ethan Boyle was on hand to fire the ball past Lewis Webb for a deserved first goal.

Wilson suffered what looked like a bad injury while trying to tackle Mihaljevic and play was held up for about five minutes while he was being treated and eventually stretchered off the pitch.

Duff’s side were more focussed in the early stages of the second half but they were rocked back again in the 62nd minute, A free by Ryan Connolly was headed back across the box by Ryan Rainey and defender Conor Tourish was on hand to bundle the ball home from close range.

The Reds became very disheartened by that second goal and although they worked hard to get back into the game, in truth they lacked the quality and guile to do so. It was no great surprise when Harps wrapped up all three points in the 90thminute, lively substitute Eric McWoods stabbing home a third goal after the Shels defence was unable to clear it’s lines.

The international break will give Duff an opportunity to heal their wounds before facing a tough away fixture to Sligo Rovers on April 1st while Harps will be buoyed by this performance and result, and will be relishing the challenge of facing Shamrock Rovers in Ballybofey in their next fixture.