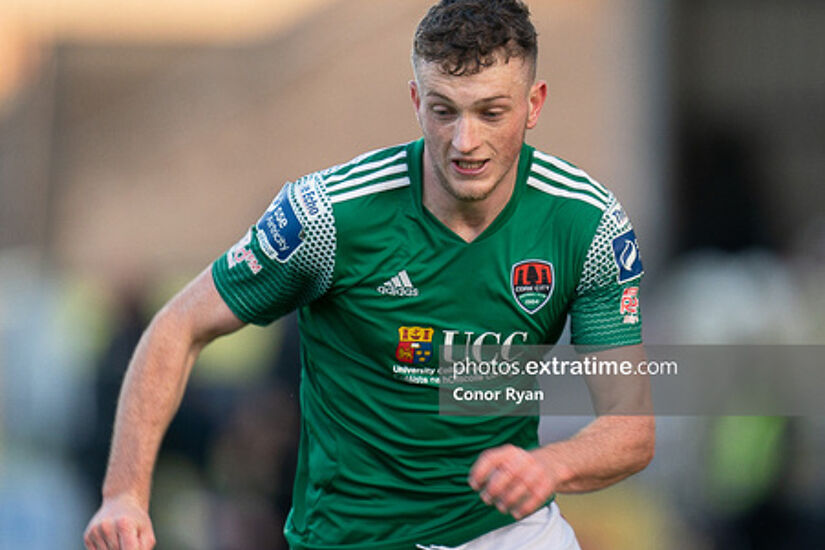 Cork City made it three wins in a row in the SSE Airtricity League First Division beating Treaty United 4-0 at the Markets Field, courtesy of goals from Barry Coffey, Cian Bargary (2) and Jonas Hakkinen.

City were fully deserving of such a comprehensive victory; the Leesiders were much more cohesive in possession and were equally clinical in front of goal. The Rebel Army started the day on top of the First Division table and Colin Healy’s men laid down an early marker but were aided by Treaty’s slack defending. uairi Keating picked out Barry Coffey who was completely unchallenged while running to the edge of the box where he drilled a low shot into the bottom corner.

Treaty were under incessant pressure an endured a severe shortage of meaningful chances but they carved out a rare opportunity on 11 minutes. Marc Ludden reclaimed possession inside the City half and picked out Kieran “Red’’ Hanlon but his 25-yard effort was easily dealt with by David Harrington.

Treaty were struggling to maintain possession of the ball and Tommy Barett’s men often struggled to move beyond the second phase of attack. Soon, City’s dominance would translate into goals. On 26 minutes, Barry Coffey collected a loose ball and released Cian Bargary wide left and he rifled it into the top corner from inside the box.

Nine minutes later, Bargary doubled his tally and the move epitomised the gulf in class between both sides. It started with Dean George giving away possession inside his own half. The ball subsequently found its way to Cian Murphy whose left-wing cross was poorly dealt with by Stephen Christopher and the chance fell to Bargary who steered it home leaving City 3-0 up at the break.

After a disastrous first half, Treaty needed an urgent response and the hosts could have pulled one back within seven minutes of the restart. City failed to clear Kieran "Red" Hanlon's cross and the ball was deflected into the path of Joel Coustrain whose low shot was saved by Harrington.

Neither managed to make a meaningful impact in the closing stages City engineered a fourth goal of the day from a free-kick on 79 minutes. The decision was awarded after Dean George pulled down Aaron Bolger before Matt Healy’s delivery was deflected off the crossbar and the rebound fell to Jonas Hakkinen who found the net.

The game petered out thereafter as Treaty fell to a heavy defeat and the result leaves Treaty without a win in three matches while City now have as many wins on the trot.

Player of the Match: Cian Bargary