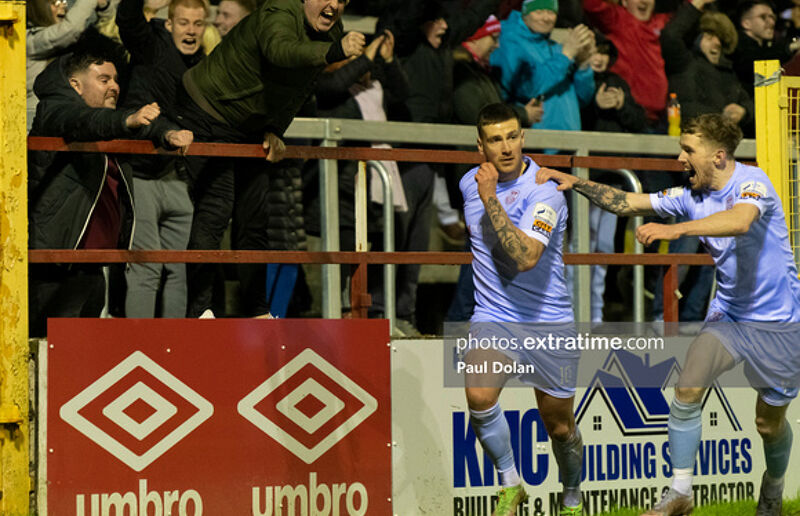 A goal at the three-quarter way stage by Patrick McEleney was enough to give Derry City a well deserved 1-0 victory over Shelbourne before a large crowd at Tolka Park on Friday night.

In truth the visitors should have won by a greater margin but a lack of precision in the final third meant that they were unable to convert their dominance into goals and ended the game with only a single goal to show for their efforts.

The win, coupled with Shamrock Rovers’ loss at St Patricks Athletic, means that the Candystripes now sit proudly on top of the league table after four rounds of matches.Shelbourne for their part played second fiddle for the majority of the game, and while they certainly are benefiting from having the likes of Damien Duff and Joey O’ Brien in the dugout, there were some worrying signs that they will find life in the top tier difficult this season.

They were a tad unfortunate though it has to be said, losing Jack Moylan just before half time and also having to withdraw Mark Coyle in the 63rd minute. Moylan in particular was a big loss and while he was on the pitch, he was their main attacking threat, his pace and close control causing some problems for Derry’s defence. It looked like a hamstring injury and if so, he will probably be out of action for a few weeks.

There were very few goal scoring opportunities in the opening half, with Derry City’s Patrick McEleney, Will Patching and Joe Thompson dominating the midfield exchanges but unable to execute the final pass for the more advanced Brandon Kavanagh and Jamie McGonigle.

Shels looked much brighter in the opening phase of the second half and Duff made a brave move in the 63rd minute going with two up front, bringing on striker Stanley Anaebonam for the unlucky Coyle. The twin strike force of Anaebonam and Sean Boyd never really threatened the Derry defence however and within 10 minutes it was at the other end that the game’s only goal was scored.

Eoin Toal had a header on target following a free kick in the 73rd minute, and when Shels keeper Lewis Webb could only parry the ball McEleney was on had to stab it home from close range. Derry saw out the game reasonably comfortably and despite the loss of Ciaron Harkin for the rest of the season they seem to have enough firepower to justify their tag as one of the likely contenders for league honours this year.

Shelbourne in the meantime are finding it tough going after the promotion last year and they will be tested severely again next week when fourth placed Dundalk are the visitors to Tolka Park.