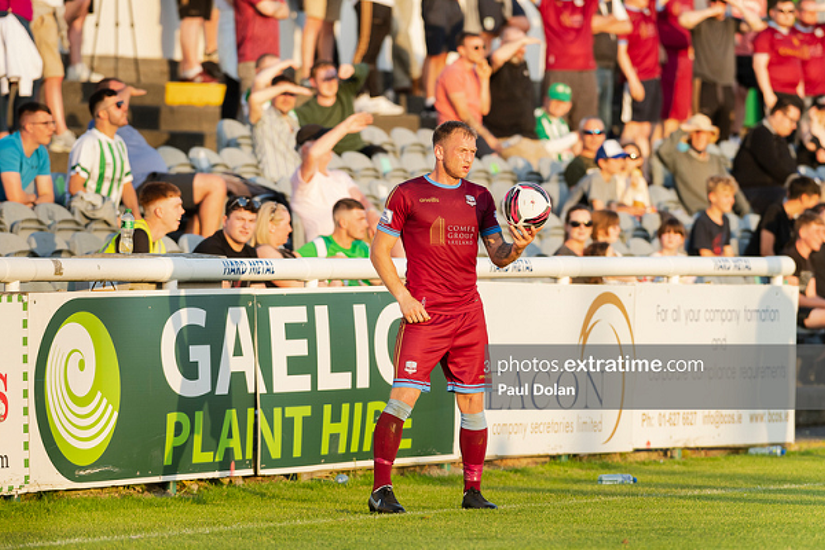 It was the clichéd game of two halves on the banks of the Corrib on Friday night as Galway United drew 2-2 with Waterford in the First Division.

Waterford scored twice in the first half to take a commanding lead with Junior Quitirna and Eddie Nolan scoring for the visitors.

Galway came out in the second half, looking like a different team and Jordan Adeyemo and a goal from the bench courtesy of Stephen Walsh meant the side earned a share of the points in a hotly contested game.

John Caulfield made just one change from the team that started in their win against Cork City last Friday night with Jordan Adeyemo making his first start for the Tribesmen in place of the suspended Wilson Waweru who was sent off at Turner’s Cross.

Francely Lomboto was also in United’s match day squad for a competitive fixture for the first time since the 2020 season, the striker suffered a season ending injury during pre-season in 2021.

Waterford named an unchanged side from their 1-0 win over Bray Wanderers at the RSC last week.

There was an excellent chance for Waterford in the opening minutes when Louis Britton broke away towards the Galway goal, he squared the ball to Phoenix Patterson, but the midfielder couldn’t get his feet right and he scuffed the shot with the goal at his mercy.

Britton was in line for a shot on goal minutes later, but with serious pressure on the edge of the box from Galway defenders Killian Brouder and Diego Portilla the striker dragged his shot wide.

Waterford took the lead with a quarter of an hour gone courtesy of Junior Quitirna’s third goal of the season, a stray clearance found the midfielder on the edge of the box, and he fired the ball through a crowded area into the bottom left corner with a beautiful strike of the ball.

There were few chances, and very little quality in play for both sides after the goal but Waterford showed their claws a few times with Yassine En-Neyah picking up a booking for a body check on Conor McCormack, Anthony Wordsworth picked up a yellow minutes later for an elbow to the face of David Hurley when the pair went up for a ball together.

Junior Quitirna drew numerous fouls all night and Conor McCormack and Killian Brouder both picked up yellows after mistimed challenges on the pacey midfielder.

Eddie Nolan doubled the Blues lead in the 38th minute after some sleepy defending by the Tribesmen, Patterson was left unmarked inside the box when he received the ball, he drilled a low ball across the goal mouth with his captain arriving in time to turn the ball into the net.

Shortly after the re-start Galway United got a foothold in the game when Ed McCarthy played a ball out to Manu Dimas on the right wing, the Spaniard took the ball on before floating a cross deep into the box with Jordan Adeyemo leaping like a salmon to nod the ball into the far corner – his first goal for the Tribesmen.

Despite a few clear-cut chances, the second half began vastly different to the first period – Waterford were the dominant side and spent much of the opening 45 minutes in Galway’s half, but the Tribesmen changed tack for the second half, stretched the pitch and looked the more dominant as the game progressed.

The Tribesmen went close in the 73rd minute when Alex Murphy and second half substitute Stephen Walsh linked up on the left wing.

Walsh was set free with a good through ball by Murphy and he took the ball deep into the Waterford box before laying the ball off for Mikie Rowe, the midfielder drilled a shot on goal, but Brian Murphy made a great save with his feet to deny Galway an equaliser.

They wouldn’t be denied for long however, just three minutes later trojan work by Hurley in Galway’s half brought the home side up the field before the midfielder played in Walsh. Normally a left back, Walsh was deployed as a striker on Friday night, the cross was on as he brought the ball on the box, but the Galway man stroked the ball past Murphy to send the home fans into hysteria.

Hurley should have had the winner in the 87th minute when Galway won the ball again – after Richard Taylor was sent off for the Blues after an altercation with Stephen Walsh. The midfielder’s shot from the edge of the box was saved excellently by the diving Brian Murphy.