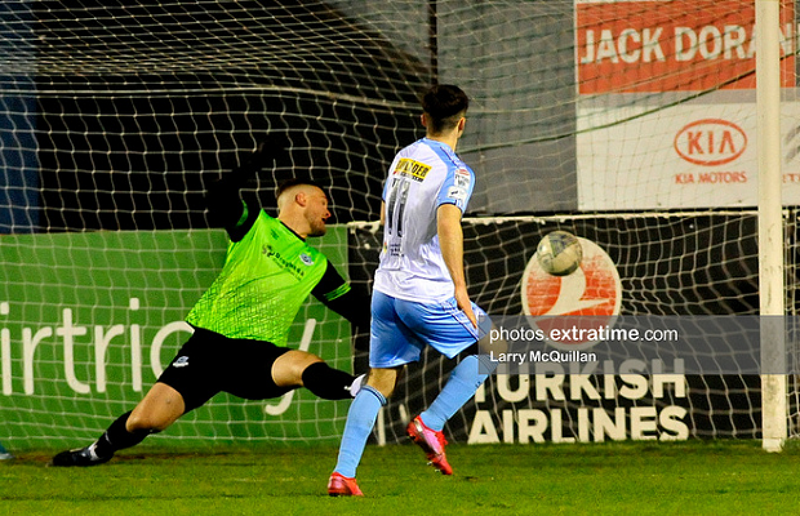 Dan Hawkins opens the scoring for Shelbourne, smashing the ball past Colin McCabe during their 2-0 win over Drogheda United at Head in the Game Park on Friday, 25th February 2022. Credit: Larry McQuillan (ETPhotos)

Patrick O ‘Connor reports from Head in the Game Park

Shelbourne claimed their first three points of the 2022 season with a 2-0 away win at Drogheda United, a victory they just about deserved over the course of the 90 minutes.

The expectation prior to kick-off at Head in the Game Park in Drogheda on Friday night was that the home side would suffer from the cancellation of their match against Finn Harps the previous Friday.

Equally, Shelbourne were expected to be well primed for their first away match following their thorough examination by St Patrick’s Athletic in their opening match of the campaign.

The reality of the opening 20 mins of the match was very different however, with Shelbourne very lethargic and jittery and performing very much like the newly assembled team that they are.

Damian Duff was making copious notes along the side line early in the match and no doubt had some harsh words to say to his troops at half time.

The hosts on the other hand were firing on all cylinders from kick off, boosted no doubt by the predominantly home support in the healthy crowd of 1, 463 spectators.

The spine of last year’s team is still very much intact, and their seasoned performers like Dane Massey, Darragh Markey, Gary Deegan and Chris Lyons drove them on during the opening phase of the match and caused most of the trouble for Shels.

The Boynesiders forced numerous corners during the opening period of the match but could not convert any of these chances into goals, something they would regret at the end of the game.

Damian Duff’s side did come more into the game in the second period of the first half, thanks in particular to play maker Jack Moylan whose decisive running through the middle was beginning to hurt Drogheda.

The game was scoreless at half time, but Shelbourne were much more fired up after the break and they got the decisive first goal in the 48th minute. Moylan again drove at the Drogheda defence and when he pulled the ball back from the end line Dan Hawkins was on hand to fire the ball past Colin McCabe.

This goal settled Shels and they went on to dominate possession for stretches of the second half, with Luke Byrne, Aodh Dervin and Mark Coyle in particular impressing for the visitors.

Drogheda did however continue to press hard for an equaliser with Markey in particular probing Shels from all over the pitch. Chris Lyons was well marshalled by the Shels centre backs though and he was replaced up front late in the game by Dean Williams.

The home side really applied a lot of pressure in the closing ten minutes but in so doing left themselves exposed at the back.

The clincher for Duff’s team came late on in injury time, with all of Drogheda’s defenders in advanced positions for a corner Mark Coyle was able to dispossess a Drogheda player and race through unchallenged from inside his own half and slide the ball past Webb to make it 2-0.

Drogheda manager Kevin Doherty will feel a little hard done by as his side played very well but goals win games as it was the new look Shelbourne who were able to find the net on two occasions and claim all three points.