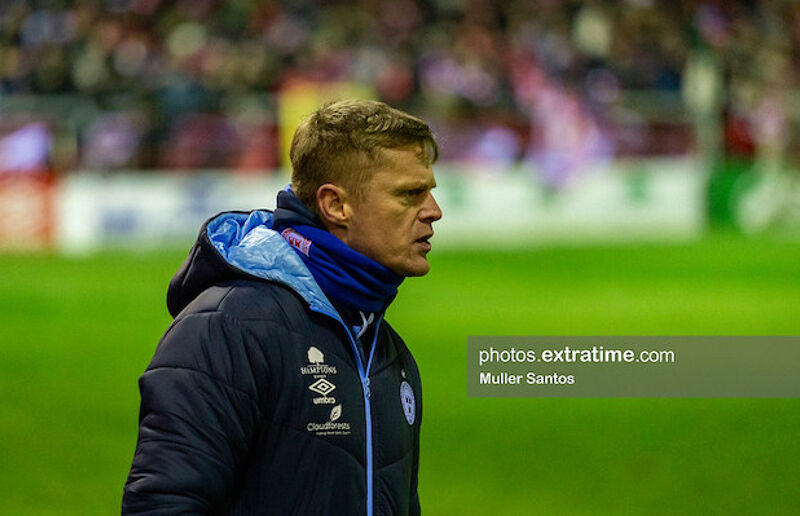 Drogheda United’s opening match of the 2022 season away to Finn Harps was a victim of the inclement weather last weekend so it’s likely they may be a little undercooked when they step out against Shelbourne in what is now their first competitive fixture of the year on Friday night (kick-off 7.45pm).

In addition to the absence of a competitive game, the Boynesiders, like many clubs, had a very high player turnover during the close season so they will be heading into the unknown to a certain degree when they face Damian Duff’s side.

Mark Doyle was Drogheda’s leading scorer in 2021, notching 13 goals, and while he has also followed Clancy to Inchicore, Doherty will be looking to new signings Adam Foley (8 goals for Finn Harps in 2021) and Ryan Brennan (15 goals for Shelbourne in 2021), to make major contributions to their goals tally in the season ahead.

The Finn Harps game being cancelled allowed Doherty to watch the Shels game and he reflected on what he saw at Tolka Park, when he spoke to the Drogheda Independent

“I was at the match, and I thought Shels were very good.

“They were fit and organised and made it hard for Pat’s, but goals change games and Pat’s were excellent, to be fair.

“But Shels were impressive as well and they made five substitutions and got plenty players on the pitch, so they’ll have a few (selection) decisions to make.

“I heard people say they were not at it, but they were at it, the goals just came at the wrong time and it was not a hammering.

“They worked very hard and if we are going to get anything out of it then we’ll have to be right at it.

Doherty has an almost fully fit squad, with Ryan Brennan and Adam Foley doing their best to shake off knocks and recent loan signing Sean Roughan set to arrive from England in the coming days.

Shelbourne came away from their opening fixture of 2022 with a 3-0 defeat at the hands of St Patrick’s Athletic last Friday night, but nevertheless Damian Duff was pleased with his sides performance and was also glad that the much hyped first game of the season was out of the way.

Shels were very much the architect of their own downfall against the Saints, surrendering possession cheaply around the half way line for the two first goals, and with the visitors in control at the latter stages of the game, Jason McLelland’s 87th minute goal was the icing on the cake for Tim Clancy’s side.

It was inevitable that Duff’s side would take some time to gel as the starting eleven had only two regulars from the 2021 side, defenders John Ross Wilson and Luke Byrne.

Shelbourne boss Damien Duff has said his side are “looking forward to Friday and Monday” as the Reds face two trips away from Tolka Park in the SSE Airtricity League Premier Division in the next few days.

Shelbourne visit Head in the Game Park in Drogheda on Friday night while a trip to UCD awaits on the coming Monday.

Despite Friday’s defeat against St Patrick’s Athletic, Duff told the club’s website: “The players are going to have a great season. There was a lot of brilliant stuff on Friday and we have showed that to the lads.”

“The lads are positive and in great spirits.’

“I’d rather be playing than have not been playing last week but we’ll soon see if there is any benefit to that. Drogheda have had a good pre-season under Kevin. We’ll be prepared, train well tomorrow with our pre-match meetings to come and be ready,” Duff added.

In team news Shelbourne will continue to be without JJ Lunney for a couple of more weeks while Sean McSweeney is nearing a return to training over the next week or so.

Shane Griffin is a slight doubt for Friday having come off injured last week.

There is no real form guide for this match as the two sides were operating in different divisions for the last number of seasons and have not met in a competitive fixture since 2019.

The first of the 2019 games ended in a 0-0 draw, with Shels winning the two other fixtures, 2-1 at home and 3-1 in Drogheda. In that last game back in Sept 2019, Aidan Friel, Oscar Brennan and Lorcan Fitzgerald scored for Shels with Luke McNally netting for the Drogs.