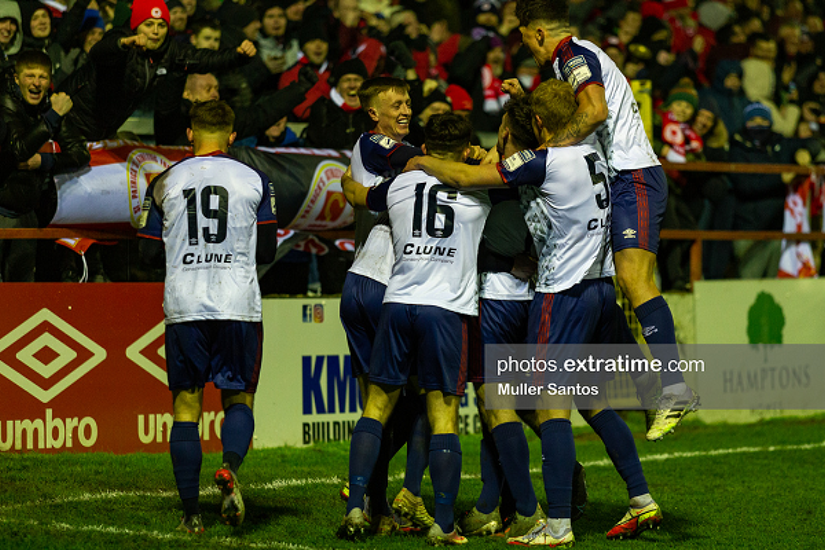 The Saints celebrate a goal during their 3-0 win over Shelbourne at Tolka Park on Friday, 18 February 2022. Credit: Muller Santos (ETPhotos)

Tim Clancy’s St Patrick’s Athletic got their League of Ireland Premier Division campaign off to the perfect start with a 3-0 win over city rivals Shelbourne and their new manager Damien Duff at Tolka Park on Friday evening.

Goals from Darragh Burns, Mark Doyle and Jason McClelland ensured that Pats returned to Inchicore with an opening night win on a chilly night in Drumcondra.

Shelbourne were almost unrecognisable from their First Division title winning season with nine new signings in the starting line up as Luke Byrne and John Ross Wilson were the only players from last year’s squad to start the game with experienced players like Dayle Rooney, Ryan Brennan and Georgie Poynton switching clubs during the offseason.

The Saints were also much changed from their last campaign with six of their side being composed of new signings after plenty of departures of their own, most notably the long serving Lee Desmond who signed for Sacramento Republic and Robbie Benson who returned to Dundalk.

Shels thought their season had gotten off to a dream as Daniel Carr, signed from National League South side Welling United, tapped in from short range after a Daniel Hawkins free kick, but their celebrations were cut short by a very late flag from the linesman after just 70 seconds.

The Reds continued to push for an early goal with Hawkins’ delivery proving difficult to deal with once again, but Jack Moylan couldn’t direct his header on target.

All of Shelbourne’s good work was undone however, as the Reds cheaply gave away possession in their own half. Darragh Burns seized on the mistake and drove forward, shifting the ball to make a yard of space and rifling an effort into the top corner to give the Saints the lead on 19 minutes.

The tempo of both sides dropped after the goal with the game becoming increasingly scrappy and bogged down in the middle third until after the half hour mark.

Moylan, who looked the most likely player for Shels all evening, attempted to dance through the Athletic’s defence, but was unable to get past the last man James Abankwah, who eased him off the ball before he could get his shot away.

Tim Clancy’s side began to push for a killer second goal in the minutes before the break as they enjoyed their best period of the half.

The Saints’ new strike partnership of Mark and Eoin Doyle, signed from Drogheda United and Bolton Wanderers respectively had been mostly kept quiet by Shels’ three centre backs, but the pair almost linked up effectively on 42 minutes.

Eoin headed a long ball back across goal but some last ditch defending from Shels denied Mark as the Pats forward had two goal bound efforts blocked to make sure the Saints advantage was only one at the break.

The home side were the quicker out of the blocks after the restart, as they searched for an equaliser early in the half.

Daniel Carr found himself in space down the right-hand side and delivered a dangerous ball across to Hawkins, but the former Finn Harps man could only shoot into the body of Joseph Anang.

The Reds launched an attack from the left wing soon after, with the ball finding its way to Carr inside the penalty area, but once again the shot was tame and easily dealt with by the on-loan West Ham keeper Anang.

After a promising start to the half, Shels were once again the architects of their own downfall, needlessly surrendering possession in the middle of the park.

Mark Doyle found himself in possession and burst into the Reds’ penalty area and fired past Webb, who will be disappointed not to keep out the effort that beat him at his near post.

Doyle’s first goal in a Pats shirt doubled the visitors advantage on 59 minutes to give Clancy’s side plenty of breathing room heading into the final half hour.

Anang was properly tested for the first time with just over ten minutes to go as Moylan picked out substitute Jordan McEneff whose powerful effort forced the Saints ‘keeper into an acrobatic save.

As the clock ticked down, the remaining hope slowly drained from Tolka Park and the Saints were able to gain control of the final minutes.

Chris Forrester struck a rasping effort on goal which had to be tipped over by Webb, but the visitors were not to be denied a third goal to put some gloss on the score line.

Mark Doyle whipped an inch perfect pass across to the onrushing Jason McClelland who made no mistake in slotting home to secure a 3-0 win for Pats.

The final score was a tad harsh on the home side who had their moments in the game but were ruthlessly punished for their mistakes by a Saints side who claimed all three points without having to play at their best.

The Saints end the night as joint leaders and host Sligo Rovers at Inchicore next week while Damien Duff will seek his first win as manager away to Drogheda.