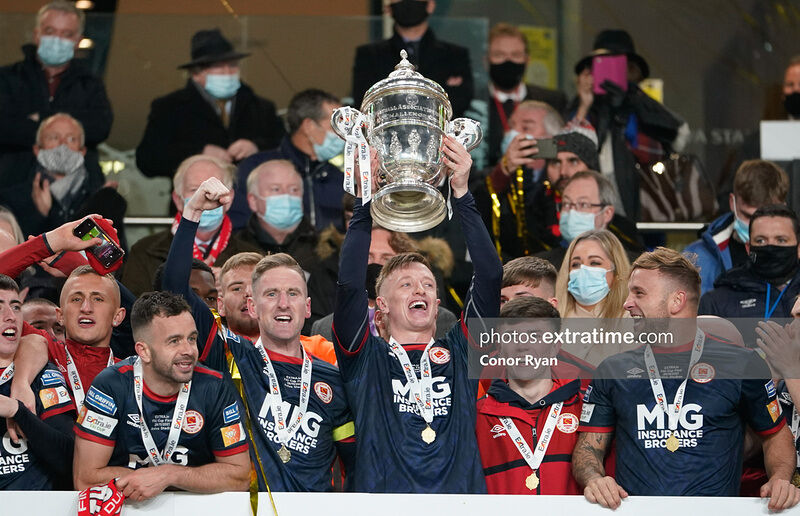 Tunde Owolabi was one of the star performers with Finn Harps in the 2021 season, scoring ten goals in 31 appearances and helping Ollie Horgan’s side retain their Premier Division status.

His switch to the Saints did not come as a huge surprise as he is a much-travelled striker who has scored goals for all the clubs he has played for including 35 goals in 41 appearances for FC United of Manchester in the 2019 season.

He will prove a great addition to new manager Tim Clancy’s striking options, competing with Eoin Doyle, Billy King, Mark Doyle and Ronan Coughlan for a place in the attacking section of Clancy’s team.

Th 26- year- old was born in Antwerp in Belgium and plays very much as a traditional centre forward so it will be interesting to see if he can replicate his 2021 form when he lines out at Richmond Park this year.

Cork born Adam O’Reilly joins the Saints on loan from Preston North End, a team he joined as a 17- year-old.  He is a box-to-box midfielder in the Matty Smyth mode, and he will be looking to enhance his reputation at Inchicore having been on loan at a number of clubs in recent years, including a spell at Waterford in 2021 for whom he made 16 appearances.

O’Reilly has represented the Republic of Ireland at various youth levels and was part of the squad which reached the quarter finals of the 2018 UEFA European Under-17 Championships.

How they did last season:

After early season challengers Sligo Rovers and Bohemians faltered as the year progressed, it was left to St Patrick’s Athletic to provide a challenge to league leaders Shamrock Rovers as the 2021 campaign entered the crucial final stages at the end of the year.

They won 18 of their 36 league matches, drew eight and lost ten but it was their poor end of season results which ultimately allowed Rovers win the title with a 16-point gap, amassing 78 points to the Saints 62 points.

They only won one of their last five league matches, beating Longford away in October but then failing to win any of their last four games against Bohemians, Sligo Rovers, Finn Harps or Waterford.

St Patrick’s Athletic won the FAI for only the fourth time in their history when they overcame Bohemians after a titanic struggle in the Aviva Stadium back in November 2021.

They certainly had to work hard to capture the cup, having to overcome Bray Wanderers (6-0), Cork City (1-1, 4-1 after penalties), Wexford (3-0) and Dundalk (3-1) along the route before facing Dublin rivals Bohemians in the final.

They were on course to win the final in extra time, after the 90 minutes of normal time failed to produce a goal, following Chris Forrester’s goal in the 105th minute only for Bohemians’ centre back Rory Feely to equalize two minutes later to take the tie to penalties.

Forrester missed his penalty kick but as they converted all other four kicks with Bohemians failing to score from two, the Saints claimed the cup on a 4-3 score line.

The euphoria around the cup win soon evaporated however, as within 48 hours then manager Stephen O’Donnell announced he was leaving the club to become manager of his former club Dundalk.

What to expect this season

New manager Tim Clancy has lost some key players during the close season, most notably staunch defender Lee Desmond and creative midfielder Robbie Benson, so his challenge will be to build on last season’s performances without these influential players.

Some astute signings in the transfer market however, most notably up front where the unrelated Doyles Eoin and Mark have arrived, as well as the retention of Udinese bound centre back James Abankwah until July give plenty grounds for optimism for the Inchicore side for the new season.

They last won the league title in 2013 and given their strong performance in the recent President’s Cup Final against Shamrock Rovers they will be many peoples favourites to go one better this year and claim the title.

In addition to trying to retain the FAI Cup, the Athletic fans will also be able to look forward to European football as they will participating in the UEFA European Conference League for the first time.

First Game: St Patricks Athletic kick off the 2022 season with a potentially cracking away match against the Damian Duff managed Shelbourne with the game at Tolka Park kicking off at 7.45 pm on Friday, February 18th.