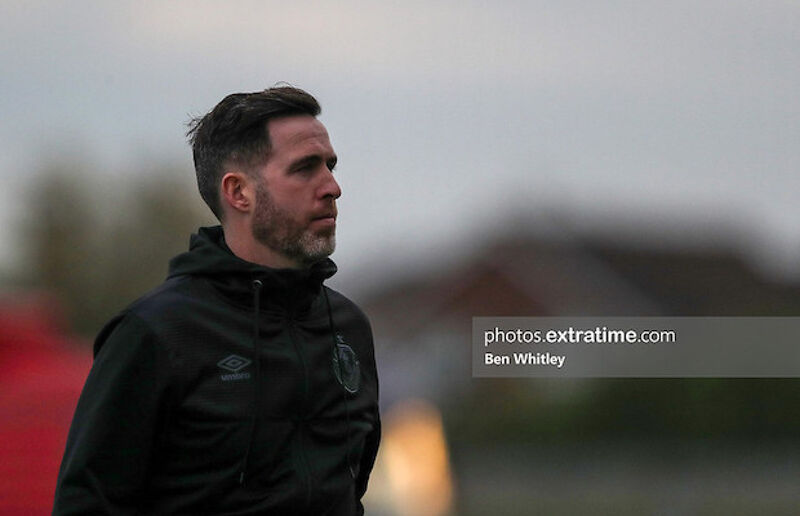 Shamrock Rovers ended their first week of pre-season with a 1-0 win in Limerick over Fairview Rangers on Saturday evening.

Having been doing fitness and gym work since December, last week was the first week Hoops Head Coach Stephen Bradley had his players out on the pitch with the football and he was pleased with how the week went.

“The game [against Fairview Rangers] finished the week really well as we only started on on the pitch last Monday,” said Bradley when he spoke with extratime.com after the game in Limerick.

“We had tough training sessions during the week including on Friday and you are hoping to get through the game with no injuries. The pitch was good and that was a real plus - we could go and play the game and not worry too much about anything silly happening.

“The players got a feel of competitive action which is nice to get early in pre-season. I knew it would be a competitive as Fairview Rangers had a really good season last year"

The travelling Rovers supporters were delighted to see Republic of Ireland international Jack Byrne back in the green and white – he was one of eight substitutes made at half time.

“It is great to get Jack back out on the pitch. He looks really fit and focused and I thought he was very good.”

The second half set pieces were split between Byrne and Dylan Watts and it was Watts who supplied the assist off a corner for Danny Mandroiu’s late winner. In his previous stint at the club, Byrne owned the set piece delivery, with Watts on duty last year when Byrne was in Cyprus.

Bradley wasn’t being drawn on who will take the set pieces in the upcoming season. “There are a few who can take them. We will judge that game by game.”

The Hoops travelled with the first team squad bolstered by a number of their under-17 players. Senior players such as AlanMannus, Aaron Greene and Rory Gaffney sat out the game having trained during the week and Bradley confirmed that Sean Kavanagh is working hard as the defender hopes to return to action by the end of February.

“We could have played some of the under-19s today but some of the under-17 boys have been training with us all week. It was nice for them to finish off the week with some first team action. I thought they did well to be fair as they are very young at 16 and 17.”

The transfer window remains open and Bradley wasn’t ruling out future additions to the squad before the start of the season.

“We said at the end of last year that we didn't want to change the group much at all. Incremental change is the way forward for us and has been that way for a while.

"If we feel we can get someone who fits our profile, then of course we will try to get them in but it has to be right fit for us and for what we do. It has to make sense in every way.”