Roberto Lopes starring for Cape Verde at this year's AFCON 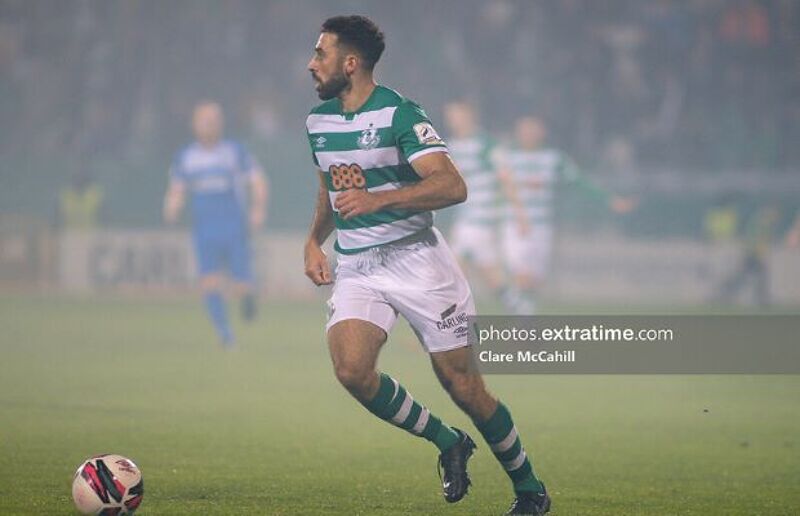 Senior international players within the League of Ireland are usually few and far between, however, fans will be keeping a close eye on one man in this year’s African Cup of Nations.

Shamrock Rovers defender Roberto ‘Pico’ Lopes will be representing Cape Verde at the tournament, after forcing his way into the side over the past twelve months. He also featured in all six World Cup Qualifiers last Autumn.

The 29-year-old was born in Crumlin to an Irish mother and Cape Verdean father.  Lopes made his debut in October 2019 in a 2-1 friendly win over Togo and has eight caps to date.

Lopes began his League of Ireland Career at Dublin rivals Bohemians, making his debut in 2011, and went on to make 156 appearances for the Dublin 7 side.

The centre-back crossed the Liffey and joined Shamrock Rovers ahead of the 2017 season and has since become a cornerstone of Stephen Bradley’s title-winning side.

At Tallaght Stadium, Lopes has won consecutive league titles and an FAI Cup in 2019. The Hoops have boasted the best defensive record in the last two seasons and made history in May when they went 33 games unbeaten. Pico has been at the heart of Rovers’ success, and Bradley was delighted when the 29-year-old earned an international call up in April.

“It’s fantastic for the club. I’m delighted for Roberto as well because I watched the Cameroon game, and he was excellent. They’ve qualified and he has something to look forward to now with the African Cup of Nations.”

Previous League of Ireland players to feature in the Cup of Nations include Benin’s Romuald Boco and Joseph N’Do, who also featured in the 2002 World Cup for Cameroon.

Cape Verde, a collection of islands on the west coast of Africa, has a population of just over half a million. After gaining independence from Portugal in 1975, they played their first international game three years later. To date, the ‘Blue Sharks’ have qualified for three African Cup of Nations tournaments and reached the quarter final stage in 2013.

Pedro Brito’s side opened their campaign with a 1-0 victory over Ethiopia on Sunday and will qualify for the knockout stage should they overcome Burkina Faso tomorrow evening.

After playing the full ninety minutes, Lopes said that he was “absolutely chuffed” with the win.

“I couldn’t have asked for a better start,” he added. “The nerves and the excitement were kicking in for the last two nights.”

“Then I had a moment to myself where I said I didn’t just want to be part of it, I wanted to get stuck in. The win has settled our nerves but the opposition on Thursday will be tougher.”

Killian Phillips: 'When you walk into the right home you know it’s the right place, and that’s kind of how I felt at Crystal Palace the first day I walked in' https://t.co/EItcUgWPdU pic.twitter.com/5dpSH9grPZ