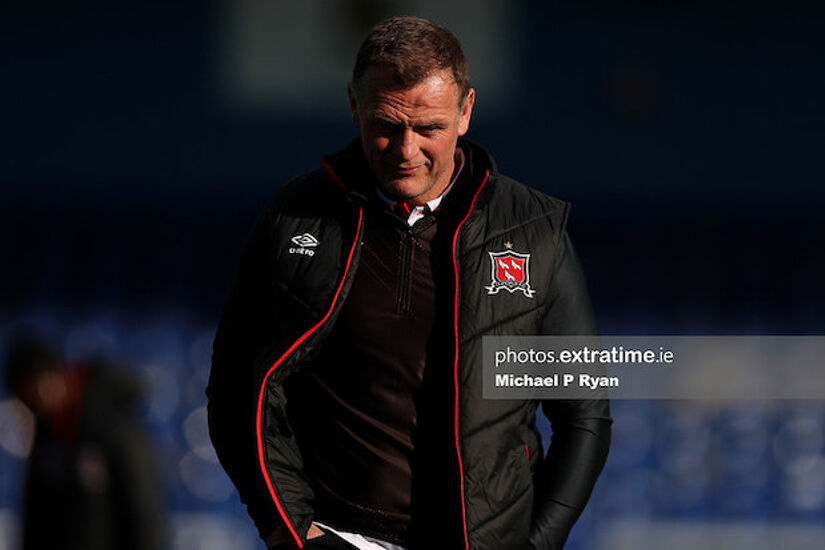 Jim Magilton: 'They say teams reflect the manager - but if that's me then I'm in a f*cking dark place' Credit: Michael P Ryan (ETPhotos)

Elite status for the LOI, contROVERSial goals and Jim Magilton’s Dark Place - The Top 10 most read extratime.com articles of the year

10. Opinion: Sustainability has long eluded football in Limerick but it's the key to long-term success in the Treaty City (Jason O’Connor)

When former Peterborough United and Limerick player Jason O’Connor penned this article in February, it remained to be seen whether there would be a team from Limerick in the First Division. Treaty United’s women’s side had brought senior football back to the city the previous year and their men’s team were looking to join them for 2021.

A return of the Shamrock Rovers II side for another season wasn’t wanted by any other club in the league (bar UCD) and the FAI wished to avoid a nine team league. When Irish Sea’s stadium rental in Santry fell through, and Rovers II shut out it, allowed Treaty United to take the tenth position in the second tier of the League of Ireland for the new season.

In this article O’Connor wrote about sustainability being the key for a club to thrive in Limerick. When Treaty took up their place in the First Division, they assembled an amateur team at very late notice one that manager Tommy Barrett brought all the way to the play-off and the club’s approach galvanised support across the city of Limerick.

They will look to build on that success in 2022.

Opinion: Sustainability has long eluded football in Limerick but it's the key to long-term success in the Treaty City https://t.co/iD9AX8aE41 pic.twitter.com/0Xb40icNA6

9. Paul Keegan: ‘We won League One and played in the Championship. We played against some great teams, with huge budgets.’ (Dan Lucey)

During 2021, we published Dan Lucey’s 100th interview on extratime.com. Lucey has spoken to an eclectic mix of current and former players and managers down through the years and making it into the top 10 most read articles this year was his chat with Paul Keegan.

Paul Keegan talks to @ExtratimeNews about sharing some of his vast experience with the @bfcdublin U-19s: https://t.co/cKKASRnIMj

8. Opinion: Petulance within the GAA needs to stop - the League of Ireland has nothing to do with their loss of elite sport status (Andrew Dempsey)

Do you remember back in February when certain members of the GAA threw their toys out of the pram when their amateur sport wasn’t assigned ‘elite sports status’ by the government? Well I do :).

Ruthlessness or is it professionalism? Was it gamesmanship or a spot of shithousery? Stephen Bradley’s comments on what he saw as clever play in Shamrock Rovers’ equaliser against Derry City in May that helped his team stretch their record run of unbeaten games in the league to 33 seemed to trigger some people!

6. Longread: When the Students sunk the Yellow Submarine - the story behind UCD’s win against Villarreal in 2011 (Andrew Dempsey)

On 15 July 2011 UCD found themselves embroiled in a relegation dogfight after a damaging defeat away to Dundalk – but one day later – they were worlds away from that reality when the Students welcomed Villareal to the UCD Bowl.

A decade on Andrew Dempsey spoke to a number of players involved in that friendly game, including Paul Corry, Ger Barron, Paul O’Conor and Robbie Creevy, who talked us through a match when UCD inflicted a shock friendly defeat on Santi Cazorla, Capdevilla and Marcos Senna's Villarreal side.

Longread: When the Students sunk the Yellow Submarine - the story behind UCD’s win over Villarreal in 2011https://t.co/V46xOMx7uE pic.twitter.com/prXiKQW585

Waterford made headlines throughout the year with Kevin Sheedy not lasting too long in the dugout (along with his assistant Mike Newell who was sent to the stands in three games), Lee Power selling the club to Richard Frost during the year and Frost sacking Marc Bircham a couple of days ahead of their relegation play-off – which they then lost.

However, making our top 5 was a story from January about Waterford qualifying for the UEFA Youth League. Due to COVID-19 restrictions the Blues ultimately had to withdraw from the competition ahead of the scheduled game in early March against Swedish side Hammerby.

With the League of Ireland making the elite status cut early in the year when COVID-19 restrictions were at their height, for players in the Junior Football ranks it meant they were left in limbo.

A number of Leinster Senior League players made the step up to sign for First Division club so they could play football when the League of Ireland season started in March.

3. The nerds have their statistical say on LOI team of the year (Macdara Ferris)

There were a few players listed in the PFAI team of the year that certainly surprised this reporter but I bring my own biases to these things so I decided to take a statistical look at who were the best players in the Premier Division based on the data collected by Wyscout. That article made the top 3 – and if you want more stats discussion check out this one on the team performances here.

I took a look into the stats - expected goals, dribbles, and second assists - to see who match analysis platform Wyscout had in their League of Ireland team of the year https://t.co/0Q8SzkVeJz pic.twitter.com/9yoQBmK2UQ

2. Enda McGuill Cup Finals 2015 to 2019: Where are they now? (Tom O’Connor)
Derry City won the Enda McGuill cup this past season beating Bohs in the final. Tom O’Connor took a look back to see how many players from previous finals went on to play senior football at both League of Ireland level and even international level.

1.    Jim Magilton: 'They say teams reflect the manager - but if that's me then I'm in a f*cking dark place'(Andrew Dempsey)

The year began for Jim Magilton as Sporting Director at Dundalk with Filippo Giovagnoli picking the team. Ahead of the season kicking off Magilton announced that Shane Keegan was the first-team manager with Giovagnoli as Coach. In April both Keegan and Giovagnoli left the club, with Magilton taking up the job as interim first team boss.

Vinny Perth returned later in the year as Head Coach keeping Dundalk clear of relegation but when the new owners came in last month, both Perth and Magilton left the club.

Back in May when Magilton was in temporary charge the Lilywhites lost 5-1 in Dalymount Park, Dundalk had taken just 14 points from their 13 league games so far and Magilton didn’t hold back when he spoke after the match and the quotes pushed this story into number one in our most read for 2021.

“It was a bright opening,” said Magilton. “What was it? Five minutes? And then it was a house of cards. We were second best, they just picked up so many second balls and we looked leggy. We got a lesson in the basics of the game and that’s not acceptable.”

Jim Magilton: 'They say teams reflect the manager - but if that's me then I'm in a f*cking dark place' https://t.co/D5qnKQT60M pic.twitter.com/BNModmBQUu