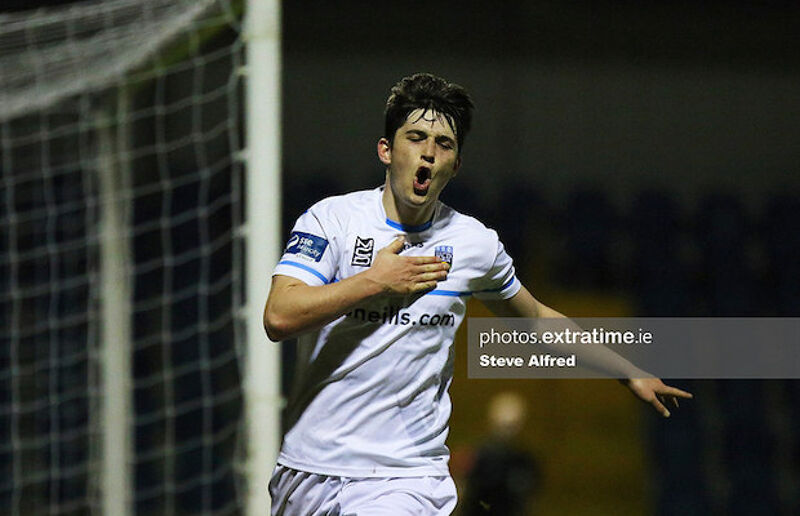 Colm Whelan of UCD celebrates after scoring the side's fourth goal away to Cobh in April Credit: Steve Alfred (ETPhotos)

With the departure of his strike partner Yoyo Mahdy to Shelbourne in the offseason, the stage was set for Colm Whelan to take over as the UCD talisman and the forward from Kilkenny did just that, scoring a whopping 25 times in all competitions.

Whelan’s quick feet, electric pace and clinical finishing were simply too much for First Division defences to handle as he scored 18 times in the league, beating Shelbourne’s Ryan Brennan to the golden boot by three goals and taking home three hat trick match balls in the process.

The input of Whelan was crucial, particularly during the Students’ run in the playoffs where he scored twice away to Treaty United in the semi-final, struck a beautiful free kick in the First Division final against Bray Wanderers and bagged the crucial second goal in their promotion/relegation final with Waterford to send UCD back to the Premier Division.

Whelan’s performances have been rewarded with call ups to the Ireland under-21 squad, where he scored against Luxembourg in a Euro U21 qualifier.

Players like Liam Kerrigan and Dara Keane have been vital to the Students’ success up front, but it’s difficult to see how UCD would have won promotion without the incredible returns of Whelan at the top end of the pitch.

As a team of college students, the majority of the UCD squad could be eligible for the best young player, but new singing Sean Brennan was youthful even for Dublin 4 side, being brought in on a free transfer from Southampton as a 19-year-old.

The midfielder, now 20, instantly became a fixture in Myler’s side, making 25 appearances between league and playoffs.

Brennan didn’t grab many headlines during the season but was an important part of his side’s midfield setup, consistently providing an option for his teammates and moving the ball quickly to keep attacks going.

The former Shamrock Rovers II man got on the scoresheet once, scoring in the important 3-2 comeback win against Treaty United in May and his role in the team is likely to grow in the Premier Division next year.

Todd was signed at the start of the season from Finn Harps and brought considerable experience with him, having made close to 100 appearances for the Donegal side.

The centre half was signed as a replacement for Josh Collins, who left for Waterford, and soon became indispensable in the heart of defence, playing in all but one game for the Students and captaining the team during the absence of Jack Keaney.

Todd’s imposing size came to the rescue time and again as his aerial threat was utilised at both ends of the pitch. He formed a strong partnership with Harvey O’Brien as the season went on and was instrumental in improving the Students’ defensive record compared to the previous season.

Before the start of the season, the extratime.com team predicted that UCD would claim the final playoff spot with a fifth-place finish.

It was a season to remember for Andy Myler’s side as they finished in third place and won promotion to the Premier Division via the playoffs.

It was a big ask for UCD to dust themselves off and go one better after the devastating loss to Longford Town in the 2020 playoff semi-final, but the Students did just that, beating Waterford in the promotion/relegation final and can now look forward to the top flight after two seasons in the First Division.

UCD were in early contenders in the title race, going unbeaten in their opening eight games.

However, their form dipped considerably after suffering their first defeat of the season to Shelbourne at Tolka Park, which began a run of five defeats in eight for the Students, ending their title hopes and leaving their playoff chances in the balance.

The boys from Belfield were able to turn thing around at the right time, however, subsequently going on a run of six games unbeaten in the league and scoring 18 times in the process to put themselves back in control of the race for the playoffs going into the final third of the season.

Back-to-back defeats to Galway United and Wexford were followed up by wins against Cork City and Treaty United and a draw away to Shelbourne as the Students finished in third and qualified for the playoffs with relative ease.

Determined not to fall at the same hurdle for the second year running, UCD found a new level in the playoffs and were well worth their eventual promotion.

An emphatic 3-0 win away to Treaty got the ball rolling, as the Students won the semi-final 4-2 on aggregate, surviving a scare as Treaty at one point reduced the deficit to a single goal in the return leg.

Bray Wanderers awaited in the First Division playoff final at Dalymount Park, but the Students prevailed once again as a late free kick from Whelan and a winner from Paul Doyle were enough to breakdown a stubborn Wanderers defence.

UCD were just one game away from promotion and faced a Waterford side which had put them out of the FAI Cup earlier in the season. The Students carried their momentum into the pivotal game at Richmond Park and were able to finish their season in style through goals from Keane and Whelan, showing resolve after conceding an early goal.

Myler’s side will now prepare for the difficult task of life in the Premier Division, but their season, particularly the playoffs, showed that they can play without fear in high pressure situations.

Conan, Clarke and the crossbars of the League of Ireland https://t.co/kfrQ5tMpHl pic.twitter.com/8acUEvbmTL

The Students gave a good account of themselves in the cup, reaching the quarter final stage for the third time in four years.

The competition marked a turnaround in UCD’s poor midseason form as results began to improve after the beginning of their cup run.

Few would have expected them to progress past the first round as they were drawn at home to First Division leaders Shelbourne, but the Belfield side showed their mettle as second half goals from Whelan and O’Brien were enough to hand Shels their first defeat of the season.

The second round gave UCD an opportunity for revenge against Longford Town after the previous season’s playoff semi-final. Goals from Paul Doyle and Whelan either side of a Dean Williams equaliser saw the Students take this opportunity and send the Premier Division’s basement side crashing out of the cup.

UCD moved on to the last eight and were drawn at home for the third time in a row, this time against an injury hit Waterford side. The Students came racing out of the blocks and took an early lead as Whelan found the net in the cup yet again, but they were pegged back by a goal from Junior Quitirna Armando just before the break.

Kerrigan restored the lead shortly after half time, but Waterford equalised once more through a penalty from Phoenix Patterson.

Whelan, normally so reliable from the spot, had a penalty saved by Brian Murphy to keep the sides level and after several more missed chances from the home team, Prince Mutswunguma struck in injury time to seal the win for Waterford in a devastating loss for the Students.

Despite the frustrating nature of their cup exit, the competition helped UCD rediscover their confidence and form for their eventual promotion and contributed some memorable days in an overwhelmingly positive season.

Ball possession, formations and expected goals against – a statistical review of team performances in the League of Ireland https://t.co/UTdevH15Ed pic.twitter.com/671badRB6d