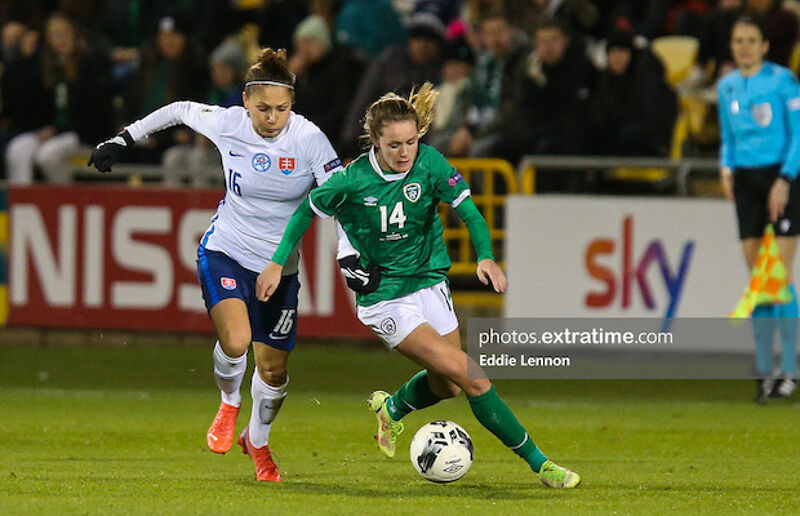 When the Republic of Ireland take on Georgia next Tuesday Heather Payne would much prefer to be braving the cold temperatures of Tallaght than the sunshine of Tallahassee. However, college commitments at Florida State for the Ballinasloe native mean she’ll be watching in from 20 degree Florida than playing in ten degree Tallaght.

“Unfortunately, I have college work,” said Payne speaking with RTÉ after Ireland’s 1-1 draw with Slovakia last Thursday evening. “I can't get out of it this time. I've come back for every game as much as I could. I did what I could to get back here for this game (against Slovakia).

“We have a great squad, so I think we'll be fine for Tuesday. I'll be tuning in. I'm very disappointed I can't play, but I have great faith in all my team-mates to go and get a win against Georgia.”

Payne, who is on a soccer scholarship playing with Florida State Seminoles, has shown her versatility in her career being deployed across a range of positions but Vera Pauw played her up top alongside Lucy Quinn last week when winning her 22nd international cap

When speaking to the media pitchside after the match, Payne talked about her playing position. “I'm feeling more comfortable now at centre-forward. I’m getting more used to it and playing with Katie (McCabe) and Denise (O’Sullivan) and the rest of the girls in there. I just need to keep pushing on now, try to get a few goals and help the team in whatever way I can.

“It's just between me and Lucy up front, we're both on either side and happy if we end up switching. We just try and run down the channels.”

The Girls in Green had to come from behind to earn a point last Thursday, with skipper Katie McCabe grabbing the equalising goal but Ireland couldn’t go on to get the winner.

Victory for her team next Tuesday will send them into second place in the table at the half way point in qualification for the 2023 World Cup and everyone agrees nothing short of three points is acceptable in next week’s qualifier.

“I think against Georgia it's a must win anyways. We were still going to go into that game with the same mentality, regardless of the result (against Slovakia). A 1-1 draw is still a point so we're going to take that.

“We had to show character, to get the equaliser. We'll push on to Tuesday, we still have the point. The second half performance, we created chances, we were just unlucky.”

The expectation is for another big crowd in Tallaght Stadium for a game on the final night of November. “It was great for the fans to come out. It's a very cold evening, we had a great crowd again. It's great that the support is continuing to get bigger and bigger and it's really promoting women's football.”