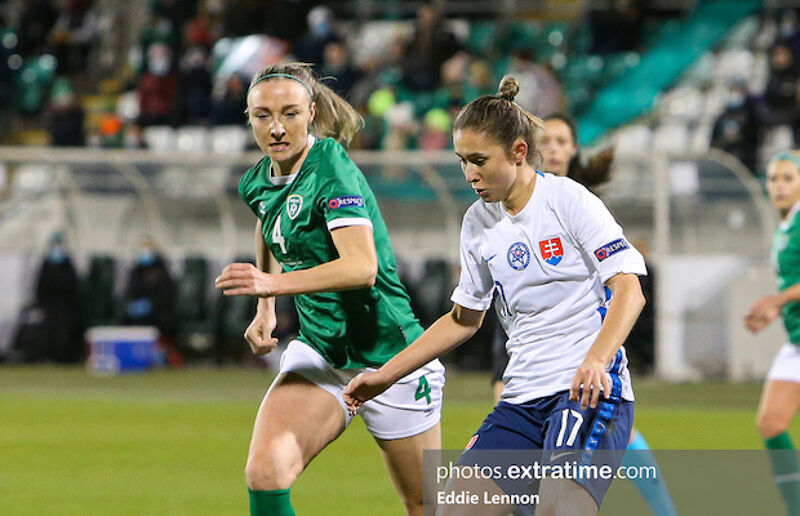 With what are now household names in their team, the large crowds cheering them on and the high calibre companies sponsoring the side, there is a certain amount of pressure on the Irish women’s football team.

There were over 5,000 supporters cheering them on in Tallaght Stadium on Tuesday, just 74 short of a record attendance for a women’s international in the Dublin 24 venue.

The worsening COVID-19 situation probably put pay to breaking that record as 6,500 tickets had been sold and heightened restrictions meant the players couldn’t interact with the fans as they normally do after the final whistle at home games in Tallaght.

Instead spending time signing autographs and posing for selfies with fans after the final whistle, a number of the players including Louise Quinn spoke with the media and were generous with their time despite the bitter temperatures in Tallaght and the disappointment of the draw in their 2023 World Cup qualifier.

Quinn reflected on the support herself and the team receive these days from the public. The support off the field is there now as well. Of course it is four years on from when the squad threatened to strike due to the poor treatment they were receiving from the FAI authorities. All the Irish players now benefit from the pressure put to bear on the FAI hierarchy from a number of the current squad including Katie McCabe, Niamh Fahey, Aine O’Gorman, Ruesha Littlejohn, Diane Caldwell and Louise Quinn.

“We love coming to Tallaght,” said Quinn who is now just ten caps short of a century for her country. “We love, even on the coldest night of the year, that people are still coming. Or if not here that there's so many people at home watching.

“We can't literally walk from the hotel without people saying, 'good luck, we can't wait to watch you'. That's what you love to hear. We're growing this game, and we're very proud of it.”

Asked to reflect was it always that way, the Birmingham City skipper said “No, absolutely not. People would be like, 'who's that group of people in those tracksuits?' Honestly! They'd be almost laughing at you! 'Why are yous all wearing the same clothes?' 'Eh, we're the Irish team...'

“It's a pleasure to be a part of it. It really is. It's heart-warming, and we know that the support we get from everywhere is unbelievable. We want to keep the belief with the fans, keep going in this group.”

The expectation levels mean the 1-1 draw with Slovakia is very much a disappointing result as the aim for Vera Pauw’s team is to at least finish runners up in their group giving them a shout at making their very first World Cup through the playoff route.

Quinn had an influence at both ends of the pitch on Tuesday as the defender forced a good stop from Slovakian goalkeeper Maria Korencivova in the first half and pulled off an amazing goal line clearance in the second half one that saved the Girls in Green.

“I just didn't get the connection I wanted,” she said about her header. “It was swirling away from me a little bit.The ‘keeper got around to the front post. I'm disappointed in that.”

On the last gasp clearance Quinn joked “Can you talk to me about it? I don't know what happened! I reacted. I saw the girl close Courtney (Brosnan), so I was like 'right I'm just going to go, get myself on the line and hope to God she hits it at me.

"Thankfully, I don't know where it hit, which foot or whatever, but it feels as good as a goal sometimes. To keep ourselves in the game, it can hopefully sway that momentum. It's part of the job, but I’m very happy.”

If Ireland can get a win at home to bottom side Georgia on Tuesday, then they will go second in the group at the half way point in the qualification. Everyone including Quinn agrees it is a must win game.

“That's non-negotiable. With that point, we've definitely kept ourselves in it. We came into it, we knew that Slovakia weren't going to be easy.

"Anything could happen in this group. Points will be taken everywhere and anywhere. We've just got to try to keep it in our control. Having the belief in ourselves. We still have it.”