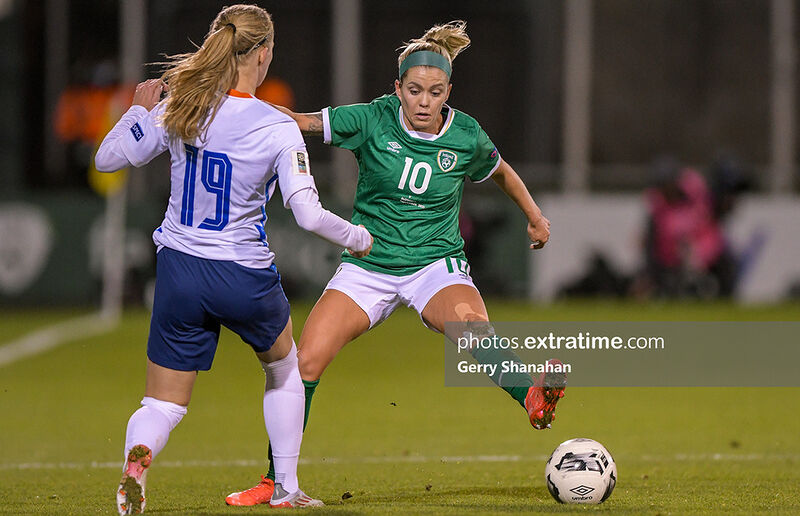 The Republic of Ireland’s qualification hopes of making the 2023 World Cup took a hit in Tallaght Stadium on Thursday night as they were held to 1-1 draw by Slovakia.

The visitors had lost all five visits to Ireland previously but did enough to frustrate the home team to take a point back with them after Katie McCabe replied to Martina Surnovska’s early second half goal.

The draw leaves Vera Pauw’s team in fourth place level on points with Slovakia who are ahead on goal difference and two points behind second place Finland who lost 2-1 away to table toppers Sweden earlier in the day.

Having sold 6,500 tickets, there was an expectation that the game would be played out in front of a record crowd for a women’s international in the Dublin 24 venue but the worsening COVID-19 situation and possibly the freezing November temperatures put pay to that with 5,164 coming through the Tallaght turnstiles.

Vera Pauw picked Courtney Brosnan once again in goal for the Girls in Green and it was a quiet enough opening 45 minutes for the Everton ‘keeper. However, having said that when she was called upon on two occasions she was quick on her feet and safe with her hands to get down to block an early cross and to save from the Slovakian skipper Dominka Skorvankova on 36 minutes.

They were the only chances the visitors had with Ireland having most of the ball in the opening half attacking a team that had a low block of four with Maria Mikolajova playing just in front of the defenders.

Set pieces looked like they might be Ireland’s best hope for breaking down the resolute Slovakian defence. A couple of Katie McCabe centres and one from Megan Connolly caused the visitors difficulty.

The closest Ireland came was when McCabe’s deep cross on 38 minutes was headed on target by Louise Quinn forcing Maria Korenciova to push the ball behind for a corner.

The Slovakian ‘keeper had earlier been forced to go high and gather a Lucy Quinn header off Áine O’Gorman’s cross from the right to keep the Girls in Green scoreless.

Megan Connolly was industrious in midfield and Heather Payne was happy to shoot on a couple of occasions when the opportunity arose but Pauw’s team couldn’t find a breakthrough in the opening 45 minutes.

On a night of low temperatures in Tallaght, Ireland were caught cold early in the second half as with Katie McCabe was upfield on the attack when the move broke down. Ludmila Matavkova was given the freedom of Dublin 24 to take the ball down the right.

Martina Surnovska timed her run well to beat Niamh Fahey and get on the end of Matavkova's cross to touch the ball home inside the six yard box two minutes into the second period for the opener.

A darting run from McCabe offered Denise O’Sullivan a shooting chance just before the hour mark. When it was blocked, Ireland recycled the ball allowing Connolly to shoot from distance to bring the best out of Korenciova who flew through the air to push the ball around the post.

It was a really well taken equaliser that Ireland scored on 65 minutes. It started with a throw on the right and when the ball came to Denise O'Sullivan in the D she spotted her skipper's run and laid it into her path. A quick touch from McCabe took the ball into the box and she slotted her left foot shot by the 'keeper for her 11th international goal as the decibel levels went stratospheric in Dublin 24.

Slovakia really should have retaken the lead with a quarter of an hour to go. Brosnan's heavy touch on a backpass played to her feet allowed Patricia Hmirova in on goal. Brosnan saved with the ball falling to sub Laura Zemberyova who shot goalwards but somehow Louise Quinn got a trailing leg to deflect the ball behind for a corner in what was a real let off for Ireland.

Ireland lay siege to the Slovakian goal late on but the dangerous balls placed into the box never fell to someone in a green shirt and ultimately it was a night of frustration for Vera Pauw’s Tallaght tigers.