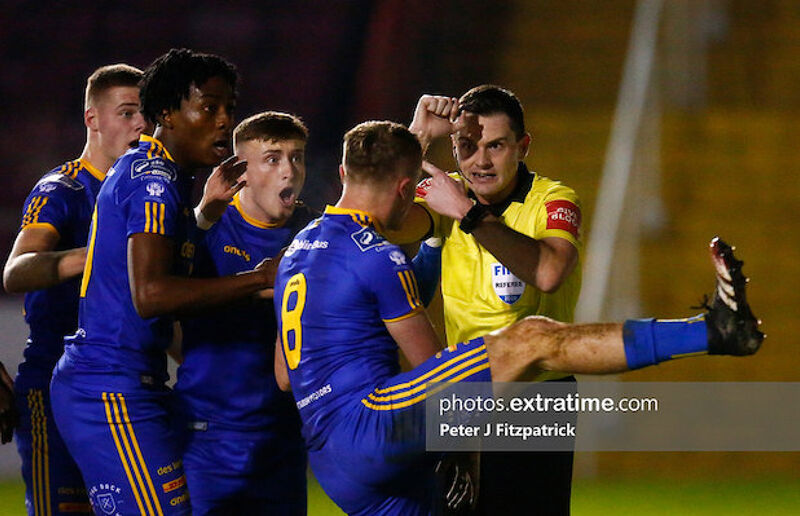 Rob Hennessy explaining a decision to Bohs players in their 2-1 win over Pats in November 2020 Credit: Peter Fitzpatrick (ETPhotos)

The 30-year-old ref has been a League of Ireland official since 2013 progressing to join the FIFA panel in 2017.

He has experience in officiating in European club and country games at both underage and senior levels including club qualifiers, group stages matches plus European Championship and World Cup qualifiers.

He debuted as an official in one of UEFA’s premier club competition for the Skenderbeu and UE Sant Julia tie Europa League tie which took place in Albania.

In 2018, he took charge of the Champions League First Round qualifying tie in the Faroe Islands between Vikingur Gota and HJK Helsinki.

In the 2019/20 Champions League qualifiers, he travelled to Sweden for AIK’s game against Ararat and last season he was ref for the Europa League group stage game between Qarabag and Maccabi Tel Aviv.

Maltese club Hibernians weren’t happy with his officiating last August when they missed out on making it to the Europa League play-off round when Hennessy was in charge of their game against Riga.

He also has recent experience at international level having refereed the EURO2020 qualifier between Austria and Latvia and Estonia’s 4-2 win in Belarus last March.

The official took the teams off the pitch in the RSC earlier this month when fireworks from the away end during the Waterford v Shamrock Rovers match disrupted the game.

When he was in charge for the Pats’ 2-1 home win over Bohs in the league in May when he awarded three penalties and sent off Head Coach Stephen O’Donnell.

In the game in July in Dalymount that Bohemians won 3-2, he sent off two from the Saints side with Lee Desmond and skipper Ian Bermingham picking up red cards.

The rest of Sunday's officiating team are:

Luke Byrne and JJ Lunney to remain at Shels for 2022 season https://t.co/UN9sB2vxyz pic.twitter.com/bEsBVNkOma