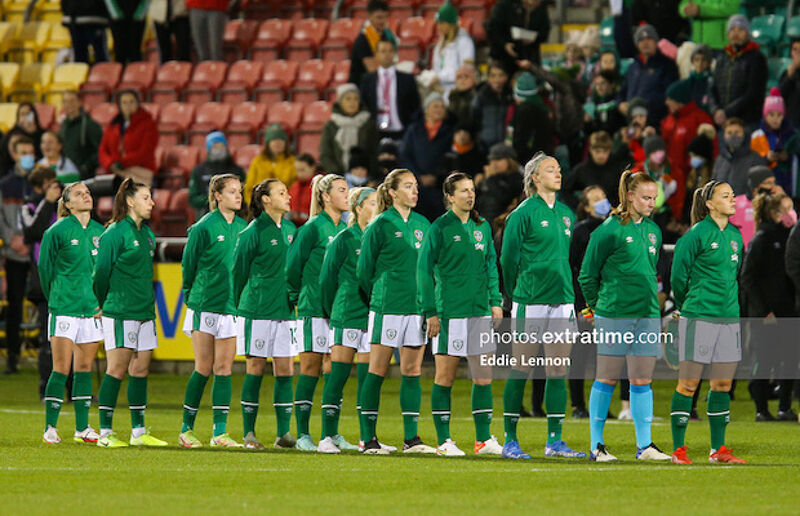 Vera Pauw will be on patrol on the sidelines encouraging her ‘Tallaght Tigers’ as they take on Slovakia in their World Cup Qualifier on Thursday evening (kick-off 7pm). The manager is calling on her team to be “ready to attack, just like a tiger.”

Ireland started their 2023 World Cup qualification well, losing 1-0 at home to Olympic silver medalists Sweden in the opening game before following that up with a 2-1 win in Finland. They are now targeting six points in Tallaght over the next six days.

“We are currently preparing for our next two challenges, against Slovakia and Georgia, and we cannot underestimate them,” said Pauw. “We need to be sharp and on our toes, ready to attack, just like a tiger.

“We have so much faith in what we are trying to achieve - players and staff - but we have to build on the win against Finland in October and find a way to take maximum points from these two games.”

The Irish team played a series of friendlies in the run up to the start of qualification.

The matches against high calibre opposition saw the team lose seven consecutive matches – the country’s worst run in the 48-year history of the international team but Pauw noted again on the eve of the game the lessons learned from those matches have been very valuable.

“Thanks to the friendly games that we have played against higher-ranked opponents, we have learned how to raise our level of performance. The players learned what it means to take on any opponent without fear.

Her team will be cheered on by what is expected to be the largest ever crowd for a women’s international in Tallaght.

“It is exciting to be back at Tallaght Stadium again and we are hoping to have another big crowd. There is no experience like it, playing in front of our passionate supporters. We know that so many people are behind us, willing us forward.

"For us, that kind of backing inspires us to be brave in what we do as we chase our dream of qualification for the World Cup.”

The visitors are well used to venturing out to Dublin 24 with Thursday’s game set to be there fourth match in Tallaght. It will be the sixth time they have played Ireland but they have lost each previous encounter with the Girls in Green.

They come into the game in Tallaght with, like Ireland, three points but having played one extra game. Similar to the Girls in Green, they lost 1-0 at home to Sweden. Subsequently they were defeated 2-1 away to Finland but beat Georgia at home 2-0 in their last qualifier.

With the group currently topped by Sweden who finished in third place in the last World  Cup, realistically the route to qualification for the next World Cup for the other teams in the group is most likely through the runners-up spot.

While the group winners qualify automatically for the 2023 World Cup being hosted in Australia and New Zealand, it is all quite complicated for the runners up.

Across the UEFA qualification process, there are nine groups and each runner-up will take part in the play-offs scheduled for October 2022. The three best runners-up will be seeded directly to round 2 while the six remaining runners-up contest three single-leg play-offs in round 1. The three winners from round 1 and the three teams seeded directly to round 2 will then compete in single-leg play-offs.

There are seven SSE Airtricity Women’s National League players, including 16-year-old Jessie Stapleton who is one of four players from WNL champions Shelbourne in the Ireland squad. A further 11 players previously lined out in the WNL.

Ireland match the milestone of a quarter of a century of matches at Tallaght Stadium on Thursday. They played their first game in the venue two years after the stadium opened in 2009 and they have played in front of an accumulated number of 49, 687 spectators.

Over 6,000 tickets have been sold for Thursday’s games, meaning two Tallaght Stadium records will tumble in a week. The current record attendance for a women’s international is 5,238 for the game against Ukraine in October 2019 and last week’s attendance of 7,765 for the Shamrock Rovers v Drogheda United game was the record league crowd in the stadium.