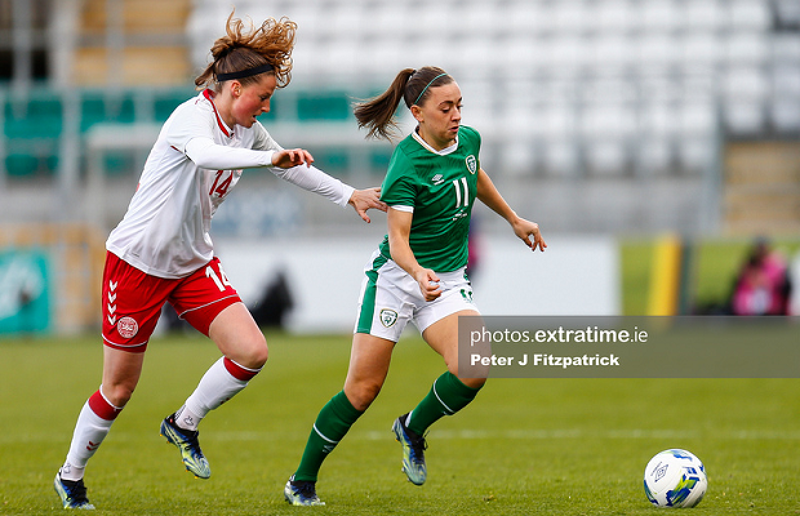 Katie McCabe in action for the Republic of Ireland against Denmark as the Girls in Green lose 1-0 at Tallaght in April 2021. Credit: Peter Fitzpatrick (ETPhotos)

Republic of Ireland manager Vera Pauw has named a 25 player squad ahead of the upcoming FIFA Women’s World Cup qualifiers against Slovakia and Georgia.

Shelbourne’s Ciara Grant and Saoirse Noonan have been included, capping off a good week for the pair after they helped the Reds lift the Women’s National League title for the first time last Saturday.

They will join up with the squad after the Women’s FAI Cup Final against Wexford Youths on Sunday.

Teenagers Aoibheann Clancy and Ellen Molloy have also been included, they will also take part in the Cup Final on Sunday before joining up with the squad. The pair have also both been nominated for the WNL Young Player of the Year Award.

Savannah McCarthy has been recognised for her excellent form once again with her inclusion in the squad. The Galway player has performed well for Vera Pauw in previous games, and she’s also been shortlisted for the WNL Player of the Year this season.

The Republic of Ireland face Slovakia on Thursday, 25 November before taking on Georgia on Tuesday, 30 November – both games are in Tallaght Stadium (kick-off 7pm).