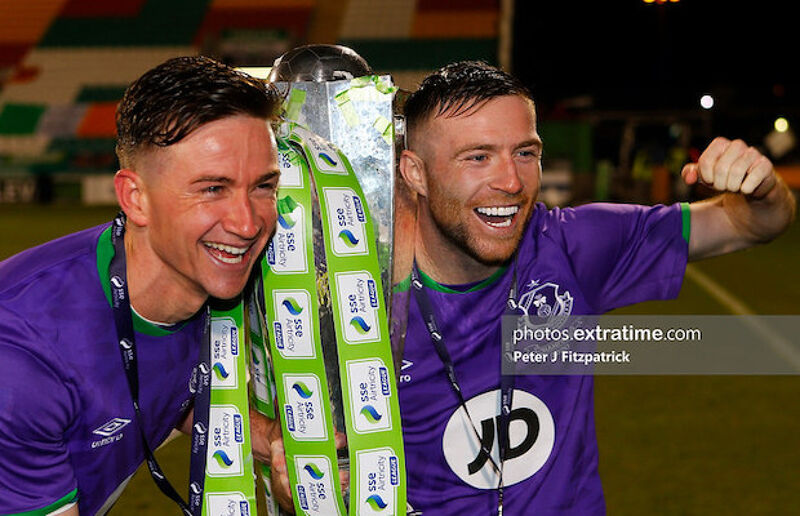 It will be party time in Tallaght on Friday as Shamrock Rovers are set to unveil the return of Jack Byrne to the Hoops and club captain Ronan Finn will lift the league trophy for the second consecutive season – although this year thankfully it will be in front of what is expected to be a full house (only tickets remain on sale for the East Stand).

"We're really looking forward to parading the trophy around the stadium in front of our fans,” said Hoops Head Coach Stephen Bradley when speaking to his club’s media team on the eve of the final game of their 19th successful league campaign.

“It's nights like that and Finn Harps (when they were confirmed as champions) that you never forget. That's why you do everything, so that you can share those moments with your family and friends and obviously all the fans. So, it's going to be a special night for everyone to be able to do that and celebrate together."

It will be Joey O’Brien’s last game in the green and white hoops before the former Ireland international retires and takes up a coaching role with Damien Duff in Tolka Park.

"Joey has been immense for this club on and off the pitch. He's a real leader. He's obviously brought his quality on the pitch, but he's been brilliant off the pitch. He's done a lot of stuff behind the scenes, important things regarding what we do, that people wouldn't see. He's been brilliant for us and I'm sure he'll get the send-off that he deserves. We've just got to thank him for his time here and wish him well in the next stage of his career and his life. He's been a brilliant servant for us."

The Hoops earlier in the season broke the all-time record of consecutive league unbeaten games pushing the number out to 33. They have lost just once at home this season and are on the verge of breaking a couple of club records.

If they can get their third win over Drogheda this season they will break their record league points tally of 77 and their record of 23 league wins in one season. “It's a target that we can go and achieve, and it'd be nice to go and get both of them on Friday.”

Three points would also ensure the Hoops secure the largest winning league margin since Bohemians were last champions back in 2008.

“(I expect) a tough game because they've had a good season,” said Bradley about Tim Clancy’s side. “They're safe now so they can play with freedom and basically enjoy the game. We know that what comes with that is a team full of confidence, so we've got to be ready for that."

When the teams last met in Tallaght it was the first time fans attended a game in the venue since February 2020.

The match last June had just 1,000 spectators (including 100 away supporters) but the venue will be packed to the rafters this Friday with Rovers set to lift the league trophy.

Drogheda’s superior goal difference to both Finn Harps and Waterford means the Boynesiders travel to Tallaght safe in the knowledge that they have secured top flight football again next season.

Tim Clancy’s side are seeking their first league win in six matches, a 1-0 home win over Derry City last month was the last time they picked up three points. That victory came thanks to a Killian Philips goal.

They come into the game on the back of 2-1 defeat to Bohs at Dalymount Park last time out.

When Rovers travelled to Louth this season, they won both times. The first victory came from a trademark late goal for the Hoops as Danny Mandroiu got the winner in the fifth minute of injury time.

A solitary Aaron Greene secured the second win for the Hoops in Head in the Game park back in August.

When they were last in Dublin 24, United earned a creditable point when Chris Lyons’ second half goal cancelled out a Graham Burke penalty.

The Hoops are the only team in the Premier Division that the Boynesiders haven’t secured a win against this season.

July 2014 was the last time Drogheda won a Premier Division game in Tallaght. Gavan Holohan scored the only goal of that game.

The last win for Drogheda United over Rovers’ first team in competitive action came in July 2018 when the Drogs dumped the Hoops out of the FAI Cup with a 1-0 home win.

Danny Mandroiu, who has scored five goals in the last three games, is second in the league’s goalscoring charts with 15 goals (five behind Bohs’ Georgie Kelly) becoming the first Rovers player since Gary Twigg to score 14 goals or more in a league campaign.