Ollie O'Neill: 'I believe I’m good enough to be here. I’m delighted with the call up but I’ve no doubts in my ability to be here' 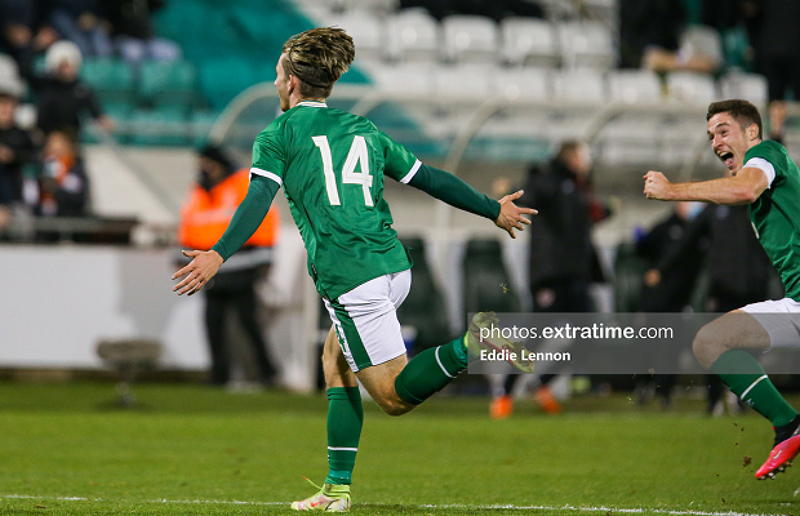 Ollie O’Neill was the hero as Ireland got their under-21 qualifying campaign back on track after defeating Sweden with the last kick of the game.

O’Neill who had just been introduced for Tyreik Wright, got on the end of a sublime Conor Coventry pass before coolly slotting beyond Sweden ‘keeper Samuel Brolin.

As the 18-year-old O’Neill wheeled away in celebration, he was swarmed by his teammates who sprinted to the corner in celebration. Referee Peter Kralovic decided time was up and blew the full-time whistle amid the rapturous celebrations.

“I knew it was late because I saw the board going up, and Brian (Maher) came running all the way from the goal shouting ‘It’s over lads, it’s over’,” recalled a gleeful O’Neill.

“I thought I was going to have to go back to defend the kick-off.”

Despite his tender years O’Neill showed all the characteristics of calculated finisher.

“I don’t think there was anything going through my head. I think I heard the noise of the crowd, and everyone thought I should hit it on my left and then there was dip in noise as I cut inside like everyone was holding their breath.

“But I was calm, calmer than most people here because I heard everyone screaming. When I hit it, it goes like that when it hits the back of the net. Bliss.”

The Londoner is a highly rated teenager at Fulham and currently lines out for their under-23 side. O’Neill was an unused substitute in an EFL Cup tie at home to Leeds earlier this season.

The youngster was named scholar of the year in the Fulham academy last season. His international manager Jim Crawford decided that despite being young enough for Tom Mohan’s under-19 squad, he was a player that was of use to the older age group.

“We have seen qualities in him that merit his call-up to the 21s. He had to wait for his chance, he came on, he did really well and a fantastic goal, I’m delighted for him,” said Crawford.

There is no doubting O’Neill’s confidence, being selected for a squad for which he is eligible for another two campaigns.

“I believe I’m good enough to be here. I’m delighted with the call up but I’ve no doubts in my ability to be here,” said O’Neill.

O’Neill was brought up in Ealing, west London. His parents and his four grandparents are Irish, and he has family in Kerry, Waterford, and Galway.

“I spent every summer in Galway more or less. I’m going to Galway for Christmas actually. I’ll be back here in a month.”

That 92nd minute winner could be the spark that puts Ireland back in the hunt for a playoff place.

O’Neill said, “We needed the three points really. Mathematically we’d be in it with a draw but really it mightn’t be enough as we’d probably going head-to-head with Sweden. It depends on results, but we knew we needed a win to stay in the hunt rather than clutching at straws.”

Game on next March, as Ireland travel to Sweden in a crucial qualifier. O’Neill will be hoping for more of the same next time out.