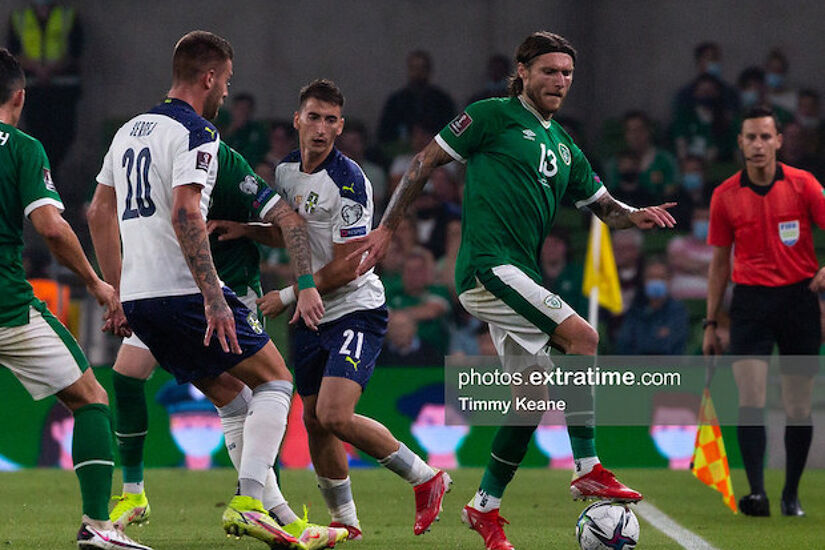 Jeff Hendrick on the ball against Serbia in September's qualifier in the Aviva Credit: Timmy Keane (ETPhotos)

Jeff Hendrick has found minutes hard to come by at his club this season. The 29-year-old has played just an hour of Premier League football in Newcastle’s opening 11 matches.

Despite this, Stephen Kenny has stuck with him, and the player has excelled in recent games.

Hendrick put in impressive midfield performances against Portugal, Azerbaijan, and Serbia. Last month he provided a fantastic assist for Callum Robinson to complete his hat-trick against Qatar, in what was Ireland’s biggest win for five years.

“I'm enjoying my football,” Hendrick said when speaking to the media in the Aviva Stadium on the eve of the Qatar 2022 qualifier.

“I’ve not been playing much this season. I feel I'm growing with each game.

“We were hurt after the last game (versus Portugal), with the effort we put in. When you play top teams like that it’s always going to be hard. I thought our game plan worked really, really well up until 88 minutes. We didn't do too much wrong out there.”

As the campaign comes to an end on Sunday, the midfielder reflected on the positives that have emerged this year. “When you saw the group you know it’s going to be tough,” he said.

“We got new managerial staff and coaches. They have done brilliantly bringing through younger players which had to be done to freshen up the squad.”

“It’s been a real learning curve for the whole group. Getting to know each other, improving, and changing our style of play. Hopefully we can take it into the next campaign.”

Looking ahead to Thursday’s huge clash, Hendrick added “Portugal are a talented side. It's going to be tough.”

“They move the ball and press well. We have to make them work when we have it. On the flip side we must be in their face and stop them doing what they're good at.”

After the recent takeover of Newcastle United, Hendrick also spoke about the challenge facing his club to survive in the Premier League.

“It’s exciting for the club and the fans, it’s something they’ve wanted. We’re down the bottom of the league, the only way is up. But at the moment my main focus is on the Ireland games.”

Stephen Kenny: ‘We must have the courage to play out, we must not be fearful. We have to play with intelligence.’ https://t.co/DZ0Qx0eQSy pic.twitter.com/qT0Vn9Xv1T