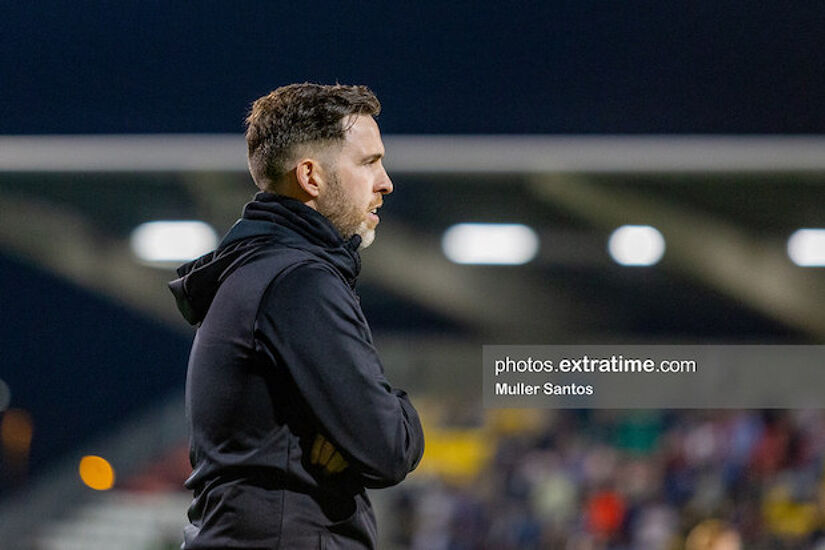 Macdara Ferris reports from the RSC

Stephen Bradley labelled the fan who set off fireworks early in the game on Friday that endangered players and fans at the RSC as an idiot but he brushed off the incident later in the night that saw Dylan Watts require treatment after being struck by an object thrown from the crowd.

These unsavoury scenes detracted from the battle out on the pitch which saw the Hoops win 3-1 to send Waterford into the relegation play-off position with two games remaining.

“It is not right obviously,” said Hoops Head Coach when he spoke with extratime.com after game about the fireworks that were launched from just behind the away dugout which caused referee Rob Hennessy to take the players from the pitch.

“It is unacceptable and should never happen in a football ground.

“Of all of our fans tonight, the hundreds of fans, it is one idiot that has caused all the commotion and put people in danger. The rest of the fans had nothing to do with it. You could see that quite clearly.

“It killed momentum in the first half. We had some half chances and they didn't do anything. We regouped at half time and we were a lot better in the second half.

“Dylan got hit with an object from the crowd after half time and it probably woke him up a bit and in the second half he was very good.”

Watts provided a hat-trick of assists for the Hoops sending a corner in on 70 minutes for Danny Mandriou to score with a header before whipping a free kick in five minutes later for Sean Hoare to head home. He then played Mandroiu in on goal in injury time for the player to grab his fourth goal in the last two game.

“We were very clinical in the second half,” was Bradley’s assessment as they came back from trailing at the break after John Martin exploited a mix up between Lee Grace and league debutant Leon Pohls to score after 12 minutes.

Bradley handed Pohls his first league start after two years at the club. “Leon has had to be patient all year. It was a reward for all his hard work. He has been brilliant for Alan (Mannus) in terms of being there and pushing him every day. It was good to get him on the pitch.”

With Chris McCann suspended and Ronan Finn, Rory Gaffney and Richie Towell carrying knocks the Hoops Head Coach only named six subs including three players from Rovers under-17 side.

The club’s under-19 team played on the eve of the game in the RSC with their final fixture set for Sunday. Aidomo Emakhu, who scored his first league goal for Rovers last week, played for the under-19 team scoring twice in their win over St. Pat’s on Thursday and so wasn’t involved with the under-19 national league title on the line this weekend.

Bradley brought 17-year-old Zayd Abada and Kieran Cruise on off the benh late in the game in Waterford to give them their first team debuts.

“We let Aidomo off along with the other boys play who for the under-19s on Thursday night and they are playing on Sunday to win the league which is brilliant for them.

“It made sense to take some of the 17s boys who have already won the league. Speaking to their manager Tony Cousins over the last couple of weeks, he has earmarked them two boys as ones that deserve the chance as they've done really well.

"You have to trust what Tony said and I thought they both did well when they came on.”

The Hoops have a Dublin derby in Dalymount Park next week before Rovers receive the trophy on the final night of the season in a fortnight’s time at home to Drogheda United.

“It is important to celebrate and enjoy nights like last week (when Rovers secured the title). That is why we work so hard all year. You have to enjoy them as otherwise what is point. Football can take you to low places so you have to enjoy the highs.

“Hopefully we can sell out Tallaght. The players and fans deserve it after last year (with the trophy presentation behind closed doors). We are really looking forward to it.”