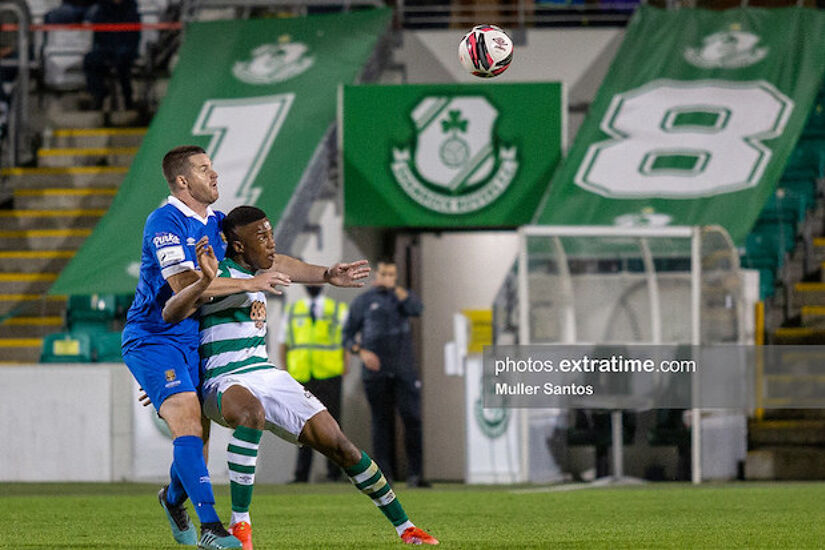 Aidomo Emahku battles for the ball against the Blues when the now 19 time league champions played Waterford in September Credit: Muller Santos (ETPhotos)

Waterford welcome back-to-back champions Shamrock Rovers to the RSC on Friday night (kick-off 7.45pm) with the Blues facing into their final three league games of the season as they look to avoid the relegation play-off.

The home side are point clear of ninth placed Finn Harps who currently occupy that play-off position and trail Drogheda by four points and Dundalk by five (after the Lilywhites late win in the Louth Derby on Thursday evening).

The Blues drew 2-2 at home to Derry last time out earning what could prove to be a valuable point in their bid to steer clear of the play-off.

They took an early lead through Junior Quitirna, before the Candystripes equalised on the half-hour mark. Marc Bircham’s boys retook the lead with a Greg Halford header before Derry scored in injury time.

“It was heartbreaking to concede late,” said Bircham speaking to the Blues media team. “We had done so well to put ourselves in that position but we have to take the positives from it. We scored some good goals and it’s another point to keep us out of the playoff spot.

“We were disappointed with the goals we conceded but we have to look to Friday. We’ve had injuries and suspensions and our squad is really stretched and lads are playing through the pain but that’s what this club means to them.”

Bircham will be able to call upon Brian Murphy for the arrival of the champions as Murphy returns from suspension but they have a number of injury concerns ahead of the game.

“Friday will be a game where nobody expects us to win so there’s no fear there. We know no matter what happens the worst we can finish is ninth so we’re going to have a go at teams and look for points in the last three games.

“Tuesday was a strange kick off time (6.15pm) so we’re hoping to see the RSC packed on Friday - the fans have been so good to us since they got back into matches so we know how important they’ll be again."

The 19 time champions travel to Waterford after claiming their latest title with a 3-0 home win over Finn Harps last week. Rovers lead second placed St. Patrick’s Athletic by a dozen points and if they can hold that lead by seasons end it will be the largest league winning margin for 13 years.

"The points gap does come into it,” said Hoops Head Coach Stephen Bradley when asked about his team’s motivations for the final three games of the season.

“The standards and levels that the players have set over the last couple of years also come into play. We don’t just turn that off and on, and in Waterford it will be no different, we’ll go to win the game.

“We know Waterford are a good side. We saw that in Tallaght and they were very good against Derry during the week. Their form since the manager has come in has been brilliant.

“He’s done a brilliant job, and we know it will be a tough game, but we have our own standards to live up to tomorrow night."

Against Harps Danny Mandroiu scored a brace, bringing his tally in the league this season to 12, before Aidomo Emakhu scored his first league goal for Rovers to round off the win.

Emakhu had been involved in 11 of the last 13 Rovers games and may get more game time at the RSC although he played and scored twice in Rovers’ under-19 3-2 win against St. Patrick’s Athletic on the eve of the game against Waterford.

"They were both really good goals and I thought his overall performance was very good,” said Bradley about Mandroiu’s goals.“Himself and Dylan Watts are playing at a really high level at the moment, and they brought that again on Friday, I thought both were excellent."

“We said a few weeks back when he missed a chance or two that he would score goals for the club, and I firmly believe that. He’s a great player to work with in terms of his attitude and work rate, I’m delighted he got his goal as it capped off what was a brilliant night and a night that I’m sure he’ll never forget."

MATCH STATS
The Blues have failed to beat the Hoops in their last dozen matches. Their last win was back in March 2018 with two Courtney Duffus goals either side of a Graham Burke strike earning the win at the RSC.

Rovers have won all three matches between the teams this season – a 3-0 home win in May, a 4-1 away win and a 2-0 victory in Tallaght back in September.

The Hoops have played 42 matches this season but have yet to be involved in a scoreless draw.