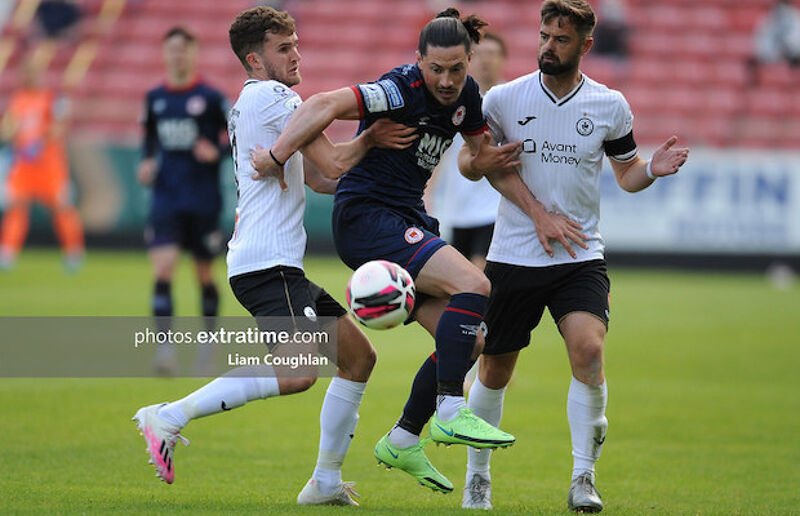 It is a clash of second against third place in the SSE Airtricity Premier Division at Richmond Park on Friday as St Patrick’s Athletic host Sligo Rovers. While Shamrock Rovers may have wrapped up the league title last week, this match is crucial in the fight for European football. The kick off is 7.45pm and the match is live on RTE2 and RTE Player.

The Athletic come into this game off the back of a 2-2 draw against Bohemians on Monday night having won their previous three matches. Goals from Billy King and Jay McClelland had put them two up before Ross Tierney and Promise Omochere hit back in the second half. Head coach Stephen O’Donnell spoke to his club’s media team about the Bohs result and the upcoming game with Sligo Rovers.

"The players are enjoying their football and I think that showed in the first 55 minutes or so against Bohs, we were excellent on Monday night,” said O’Donnell.

“We should have been more in front but obviously gave away two really sloppy goals and we stopped what we were doing then but I thought we regained our composure in the last ten minutes or so and were in the ascendency.

“Our recent form has been good as have our performances, we've made changes and not really weakened the team which is a good sign for the squad.

“Everyone is in a good rhythm, we are playing with confidence and enjoying our football coming to the latter end of the season.

“Friday will be no different, it's going to be a tough game, but one we are looking forward to, especially at home in front of our brilliant supporters."

A draw or a win on Friday will see the Saints secure second spot for the season.

The Bit’O Red seem to be hitting form again and have won their last two outings. Strikes from John Mahon and Johnny Kenny (who signed a new three year deal with Rovers this week) were enough to see off Drogheda United last Friday and a Lewis Banks injury time goal gave them a 1-0 win over Longford on Monday.

In the lead up to the game manager Liam Buckley said: “We’ve had four days in between the Longford game and this one so we’ve had enough time to recover. We had a few players to assess afterwards and they’ve come through it in the main.

“It was important to pick up the two wins in the last week. It’s extremely difficult to win any game in this league and we’ve stuck at it. They were hard fought which isn’t a surprise and it’s going to take another big shift on Friday.

“We’ve scored late goals recently and in truth it doesn’t matter when we score as long as the goals come. Late goals have gone against us earlier in the season – including when Ian Bermingham did so in one of these games – so it was good to be on the right side of it.

“We did well in the recent game in Sligo and when you look back overall it shows the teams are well-matched.

“It is one game at a time for ourselves. We’re trying to put as many points on the board as possible and a win would certainly help us in the race that we’re in.

“St Pat’s have done well, they play a good brand of football and they’re up there in second place with the FAI Cup final to come. I think they’ve won 12 out of 16 at home, they could have had more goals against Bohemians in the first half the other night when they went 2-0 up.

“But we’ve done alright ourselves and we’ve been in the top three for a long time. It’ll be tight and we go there looking for another good result.”

A win here would go a long way to securing European football at the Showgrounds next year but with Derry on their coat tails and fourth place not guaranteed qualification there is still a lot of football to be played.

The clubs have met three times this season, playing out a draw and one win apiece. Sligo ran out 2-0 winners last time they faced eachother in September. Johnny Kenny and Ryan De Vries getting the goals that day.