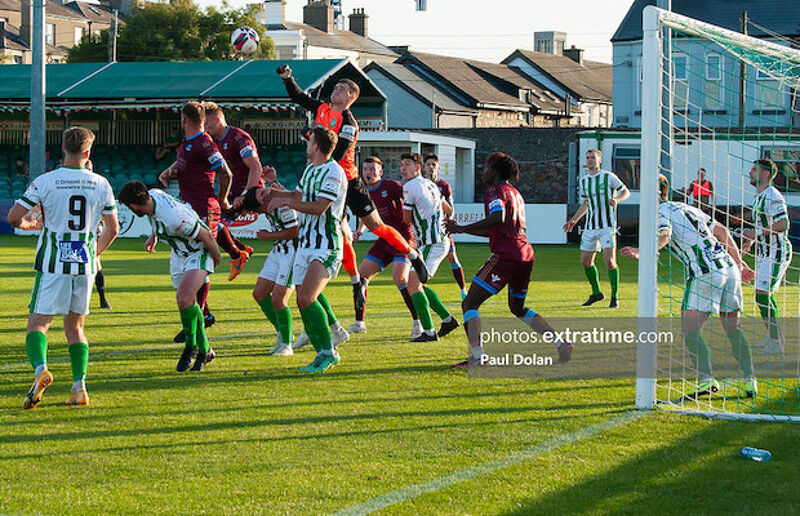 Action from the scoreless draw in the Carlisle Grounds between the sides last July Credit: Paul Dolan (ETPhotos)

The Seagulls have drawn the short straw in the First Division play offs, as by finishing fifth in the table they will face second placed Galway United for the chance to progress through the play-off process and earn the right to compete in the Premier Division next season.

In addition, they have to play the first leg at home and then face into the crucial second leg down in Eamonn Deacy Park in Galway next Sunday afternoon.

Bray are in this position because of their very poor recent form, having won only one match in their last nine outings, that a 1-0 home win against fellow promotion hopefuls Treaty United back in mid-August.

They will be particularly disappointed with their last three matches leading up to this play off fixture, losing all three including a 1-0 away loss to their opponents this Wednesday night.

Wanderer’s goalkeeper and Ireland under-21 International Brian Maher was on media duty during the week and he said ‘’we are expecting a very tough game. We obviously played them recently and even though we lost that a few decisions did not go our way and we missed a few chances.’’

He added ‘’every game this year against them has been close. It’s been one win each. We are looking forward to the challenge of it, obviously it is over two legs which adds another dimension to it but we are well up for it.

“We need to get past Galway to get to our goal, ideally we wanted to get promoted outright, now we have to do it through the play offs, but really we are just looking at it as just another game for now.”

Extratime.com also spoke with Seagulls striker Gary Shaw. “I think that the big thing for us is that we have last year’s experience with the play-offs and build up to play-offs under our belts,” said Shaw who was part of the team who finished runners up in the First Division last season.

“A lot of lads haven’t experienced the play-offs before so it was unknown last year. Anything can happen in them; they are essentially cup finals . It’s just do whatever you can to get over the line. You aren’t going to start talking about performances. It’s all about the result so the lads know what it takes and last year is going to stand to us.”

Gary Shaw: ‘You aren’t going to start talking about performances. It’s all about the result (in the play-off)’ https://t.co/sWy3s1IdbE pic.twitter.com/LwvuQ9AJEZ

The Tribesmen  finished an excellent season for them with 51 points, only six behind outright First Division winners Shelbourne, and claimed a highly creditable second spot in the table.

Apart from the 3-0 loss to Cork City last weekend, they had four back-to-back wins prior to that and were already guaranteed the runners up position when they headed to Cork for the Turner’s Cross match.

Former Cork City player and current Galway United manager John Caulfield spoke to the media this week and said “this is the most important week of the season with the games on Wednesday and Sunday.

“Going to Bray on Wednesday will be an extremely tough game. The way we look at it is that we have two cup finals this week so we will see where we are at the end of next Sunday.

“There was excitement last year when we got into the playoffs but there were no crowds. But this year, the buzz for the last three or four home games has been fantastic so I encourage all United fans to get to Bray on Wednesday because we need that support. We would love to have a full house when we get home on Sunday too.

“We look forward to both matches. We know how difficult it will be but at the same time we have been in good form since the mid-season break. But you are in cup football now so you need to produce it on the pitch; hopefully we will be able to do that.”

In team news, Galway will be missing Francely Lomboto and Ronan Manning but welcome back Gary Boylan, Stephen Walsh and Ruari Higgins from suspension.

The contests between the two sides have been very even this year. Bray had a good 2-1 away win in Galway in May, it was 0-0 when they met in the Carlisle Grounds in July while Galway won the most recent clash 1-0 in Galway on Oct 22nd.