Success for Cork City as they win Sky Blue Cup 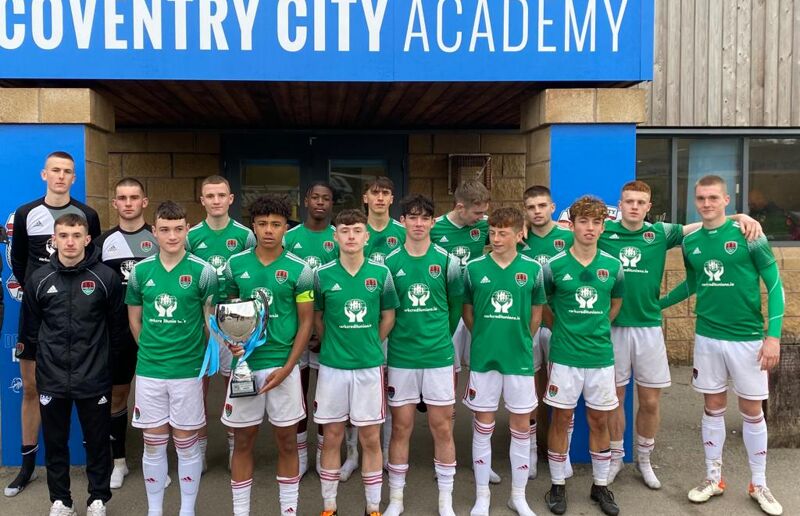 Cork City’s Under-17 side will be contesting the Mark Farren Cup final in the coming weeks against Galway United but they have managed to land some silverware in preparation for that game.

A Mark O’Mahony goal was enough to see off Coventry City in a 1-0 win. O’Mahony was on hand with a brace as City beat Oxford United 3-0 with Donnchad O’Doherty scoring the other goal. Anothr 1-0 win over Bournemouth thanks to a Franco Umeh set up a final against Coventry.

With the game tied 2-2 after extra-time, the Leesiders successfully saw off their English opponents 3-2 on penalties.

Speaking about the trip, Cork City FC’s Head of Academy, Liam Kearney said: “This has been a great trip and a great experience for the players and staff. We got the opportunity to face some very strong opposition and to win the tournament itself is a great bonus. I would like to thank everyone involved in giving the players the opportunity to make the trip, particularly Cork City Council, and also to thank Coventry City for hosting us.”

City’s Chief Operating Officer, Éanna Buckley, also commented: “There is fantastic work being done at our academy by Liam and his coaches, and this trip was a great opportunity for them to face some very strong opposition. We were delighted to receive the support of Cork City Council via the Twinning Grant, which made this trip possible.”

“Myself and the Board have been working closely on developing a strategy that allows us to maximise the club’s capability in availing of the various grant schemes available through public bodies. We also recently received a grant under the Cork City Council Sports Capital Grant Scheme 2021, which enabled us to purchase new goalposts and other vital equipment for our training ground, which will benefit each of our six academy teams, women’s team, and first team, so the ongoing support of Cork City Council is hugely appreciated by all at the club.”