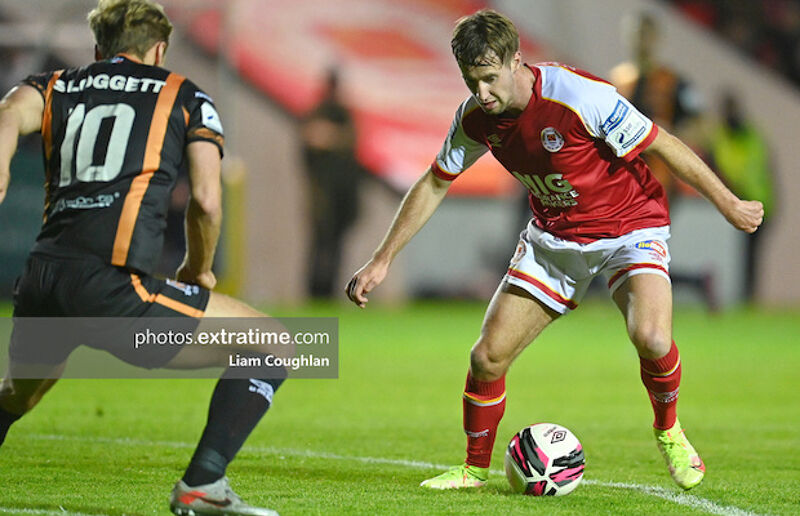 Billy King got the winner for the Saints over the Lilywhites Credit: Liam Coughlan (ETPhotos)

The Saints inflicted their second defeat on Dundalk in four day thanks to a solitary strike from Billy King - a result that leave the Lilywhites very much battling to avoid the relegation play-off.

The win moves the Athletic nine points clear of third placed Sligo Rovers with five games remaining while the loss for the Lilywhites leaves them mired in relegation play-off trouble.

As Dundalk were defeated in Richmond Park, across Dublin in Dalymount Park a 2-1 Waterford win over Bohemians saw the Blues join Dundalk on 39 points but with a game in hand over Vinny Perth’s men. Finn Harps drop into ninth place but they are just a further point behind with a game in hand on the Lilywhites.

It wasn’t quite the helter-skelter cup tie we had bringing us into the Bank Holiday weekend but the opening 45 minutes on Monday night had plenty of decent play from both teams even if the home side was the team with more of the ball.

It took until the tenth minute of the game for the first shot in anger. Jamie Lennon lined up a shot as he ran onto a headed Dundalk clearance but he sent it wide.

While the Saints had more of the ball, they needed their goalkeeper to be on his toes on a couple of occasions in the first half. Vitezslav Jaros had to tip over a Will Patching free kick from wide just before it dropped below the crossbar in the 14th minute.

He then pulled off a fine diving save soon after to push Darragh Leahy’s diving header around the post.

However a minute later the Athletic grabbed the goal to give them lead.

Billy King got the first goal of the game between the sides on Friday and he did the same on Monday night with an unstoppable shot from the edge of the area on 26 minutes.

Lennon spotted King wide right and when he cut inside his majestic shot from the edge of the area flew by Peter Cherrie who was routed to the ground.

It looked like the Lilywhite had equalised nine minutes before the break as Patching put the ball in the back of the net from the edge of the area off a cleared corner. The visiting players were celebrating until the heard Graham Kelly’s whistle. They surrounded the referee but Greg Sloggett seemed to be in an offside position blocking the view of Jaros and so the goal looked to be correctly ruled out.

Daniel Kelly came close ten minutes after the break getting on the end of a quick Dundalk break but he blasted Michael Duffy’s centre over the cross bar much to the disappointment of the small but vocal band of travelling fans behind that Kilmainham goal in Richmond Park.

At the other end King went close with a drilled left foot shot that just cleared the Dundalk crossbar.

Dundalk applied pressure late on with Vinny Perth bringing on replacements off the bench to add fresh legs as they chased the equaliser. When King clashed with substitute Sami Ben Amar on the Pat’s end line, Sean Murray whipped the ball into the box but they failed to capitalise.

Shane Griffin bravely blocked a driven Raivis Jurkovskis effort before the home side brought both Ian Bermingham and Paddy Barrett late on as they looked to shut up shop and they did so successfully.

Vinny Perth spoke on Friday about this being’s Dundalk’s ‘Last Dance’ and if they can’t pick up sufficient points in their final four game they face into a relegation play-off next month which could see them playing their football in the First Division in 2022.

The home side meanwhile have an FAI Cup final to look forward to and look well on their way to securing runners up spot behind champions elect Shamrock Rovers.

Jon Daly: ‘The sheer joy, emotion and noise in the Millennium stadium will stay with me forever’ https://t.co/Ou3ntB49bT pic.twitter.com/qWjKMwUDGP