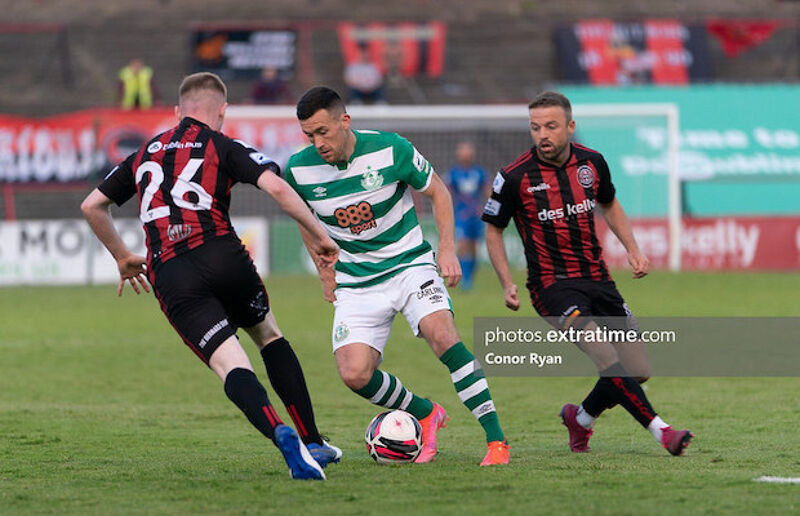 Aaron Greene in action for Shamrock Rovers against one of his former clubs Bohemians Credit: Conor Ryan (ETPhotos)

When has a number 9 who is not playing as a number 9 won successive league titles without ending up top scorer at the club in either of those title winning seasons and whose name is rarely mentioned as one of the key players in his side? All at 31 years of age while playing in his second spell at a club when during his first spell he only started six times in the league.

The player in question is Aaron Greene with Shamrock Rovers expected next weekend to pick up the three points to give them back-to-back titles on the 12 year anniversary of Greene scoring his fifth league goal for Galway United in his debut season in the League of Ireland. The opponents back then in 2009 were Shamrock Rovers with goalkeeper Alan Mannus between the sticks.

Next weekend, Mannus and Greene are poised to pick up their second successive league title as team mates. While Mannus left Rovers during the 2011 season to carve out a successful career in Scottish football before returning during the summer of 2018, Greene took a more nomadic route through the League of Ireland before joining Stephen Bradley's Hoops in the same transfer window as the Northern Ireland custodian.

Having departed the Tribesmen at the end of the 2009 season, Greene initially joined Bohemians where he finished second in the Premier Division before repeating the same feat with Sligo Rovers the following year. After scoring six league goals across the two seasons, his overall contributions were noticed by current Republic of Ireland boss Stephen Kenny who signed him at Shamrock Rovers for the 2012 season, a campaign which proved fruitful for neither party with both moving to pastures new for 2013.

Kenny joined Dundalk en-route to his international appointment while Greene returned to the Showgrounds where he added a second FAI Cup winners medal with the Bit O'Red, having claimed his first in 2011. It was at Sligo where the Tallaght native's versatility really started to shine as he filled a number of positions including winger (left and right), left back and in an advanced midfield role as well as starting in the centre forward spot.

However, after nine Sligo Rovers goals in 41 league appearances, midway through the 2014 season, St. Patrick's Athletic came calling and Greene pitched up at Richmond Park. Once more, he demonstrated his positional flexibility with stints at left back, left wing, attacking midfield and centre forward yielding 11 league goals across his time with Liam Buckley's men.

Martin Russell, at First Division Limerick, signed Greene for the 2016 season and the forward duly repaid his manager's faith as he netted 11 goals all while playing on the left hand side of the Shannonsiders' attack as they were promoted as First Division winners.

A spell at Bray Wanderers followed which ended in the summer of 2018 after financial challenges at the Carlisle Grounds - Greene was initially expected to join Cork City but ultimately ended up with Stephen Bradley's side, his son already playing in their Academy playing a role according to reports at the time.

2019 saw Greene alternate between the left wing and centre forward position, netting eight league goals and recording eight assists from out wide and three goals as a central frontman (according to transfermarkt though InStat have credited him with only fuve assists) as Shamrock Rovers finished second in the table – with Greene top scorer for the Hoops. His scored three times in Rovers' successive FAI Cup campaign.

According to InStat, for the 2019 season, 55% of his shots were on target - the highest rate of anyone in the top 20 shots on target grouping. In terms of actually hitting the net, only Derry City's Junior scored more times in open play (14) than Greene (11) while he also made an average of 18 tackles per game and recorded, played a part in 45% of Shamrock Rovers' scoring attacks and ranked second in the league in terms of Playing in Team Pressing.

2020 saw a reduced league schedule of 18 games, in which Shamrock Rovers ended up as league champions and their number nine contributed seven goals, (plus two assists) including the winner against former club Bohemians on the opening night of the season, all from the centre forward position.

This season, despite the loss of Aaron McEneff and Jack Byrne from his supporting cast, Greene has continued to lead the line efficiently for the champions in waiting - recording four assists and six goals.

The attacking additions of Rory Gaffney, Danny Mandroiu and Richie Towell as well as the emergence of Aidomo Emakhu have meant that, once again Greene has been used in a number of attacking positions - on the wing, in a lone centre forward role and as part of a striking partnership. He has also slotted in as left wing back on occasion including in the second half in Saturday’s 1-0 win in Longford Town.

His six goals this season have showcased these abilities of the Tallaght native. The first, an 89th minute equalising header against Sligo Rovers, saw him score on the opening night of the season for the third successive year. His second goal was a close range finish converting a Gaffney pass to open the scoring in a draw against Finn Harps.

His third, a week later, was also an unmarked finish this time slightly further out but again following a setup from Gaffney, this time to round out the scoring in a 4-1 defeat of Waterford. League goal number four was another to seal a victory as he netted the third in a 3-1 win over Dundalk, this time Liam Scales assisting with a knockdown and Greene turning sharply to fire past Peter Cherrie from 10 yards.

His fifth was an easier finish as he netted the winner against Drogheda from inside the six yard box with Graham Burke the provider on this occasion following a 16 pass build up. He saved his best finish of the season so far for goal number six as he carefully lobbed Danny Mandroiu's pass over Sligo Rovers keeper Ed McGinty to finish off a 2-0 victory.

Last Friday, all the good news by headlines were grabbed by a 24 year old centre forward Georgie Kelly who plays centrally for a side where no player in their 30s has scored since 2019. Next week, their city rivals may clinch a second league title in the same period and they will be spearheaded by a 31-year-old forward who makes very few headlines off the field but is a crucial component on it.

I'll leave the last words to Stephen Bradley in a 2019 interview with Paul O'Hehir: “Aaron is very, very clever. His movement is very good - he gets the game.”

He gets the game and is now getting the trophies to match. Over a dozen years after he first lined up in the league his versatility and importance remains ever-Greene.